I am writing this post really to document happenings in my house over the last year or so.  Previously I posted about other weird occurrences but these things are happening more and more frequently.

Terry has felt someone poke him while he is sleeping.  Ok.  That's probably a dream that feels real.  But it happens pretty often.  He hears me call his name when I didn't.  Come on..he doesn't even hear me when I DO call his name, lol.

But these occurrences that have been happening are out of the ordinary.

Then there was the smell of cigarette smoke in the living room.  All the doors and windows were closed.  It was NOT the smell of wood burning, but a cigarette.

And the night I woke up smelling my SIL's perfume in the bedroom.

There is a shelf in the back hall next to the extra refrigerator about shoulder level.  There has been a box about 9 x 9 x 9 sitting on that shelf for years. So long that I had forgotten it. Out of the clear blue it fell off the shelf.  We heard it fall, and checking it out there was absolutely no reason for it to fall.

We hear something fall in the garage...we find nothing out of place.

This morning the MOST unexplained thing happened.  I had collected a bag of sweat shirts to give to my daughter.  I put them in a white 13 gallon trash bag and tied a knot in the bag and placed it on the floor of my sewing room.  I put them there where the would be out of the way because I had more to give her.  I saw them there, in the bag when I turned out the light last night before I went to bed.  This morning when I got up, the sweat shirts were on the floor in a stack and the bag was no where to be found!.  Not the bag.  Not a piece of the bag anywhere. How does that happen?  HOW DOES THAT HAPPEN???

Does stuff like this happen at YOUR house?  I'm really open to the Supernatural.  Stuff falling or sounds in the night...ok.  Sometimes things disappear and show up later.  But this bag thing is TOO weird.
Posted by Carol- Beads and Birds at 8:16 AM 19 comments:

I HAVE Been Busy 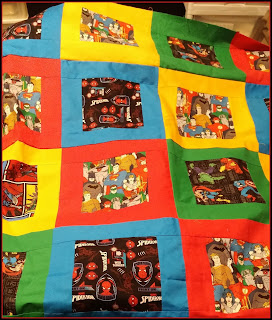 This is the quilt top I have been working on.  The focal blocks in the center are various Marvel Comic fabrics.  My great grandson Nic is all into Spiderman right now so I think he will really love it.  I have a blog friend Mary who make a LOT of quilts and generously shares  instructions for them on her blog.  This quilt is Happy Blocks.  When I finish it, I'll be making a quilt for Nic's little brother Corey Jr. using another of Mary's quilts Quickie Strippie.

Guess what?  Nic and Corey Jr. are going to have a little brother or sister next Spring.  I was sure surprised by THAT news but everyone is really happy about the news.  We asked Nic what he was going to do having TWO babies to look out for.  He told me he has two hands.  My heart just bursts with love for Corey and his growing family.

I have pretty much given up on the landscaping around the pond.  The weeds are pretty much under control as I weed a little each day if I see them popping up through the new mulch.  We still work to control the algae in the pond.  I added 3 dozen Japanese Snails and not one has died so I guess they are feasting in the deep end.  I also have 6 baby frogs that seem to be happy.  However, only one of them is an adult.  Frogs seem to come and go each year, especially when we have days of rainy weather.

My crows are still coming to visit every day, however, the 3 have become 7 and are now two families.

Terry and I have had a lot of doctor stuff going on.  Nothing serious, but in September Terry will have a cataract removed and I will have carpal tunnel surgery on my left hand.

Grateful:  Today I am thankful for Benedryl.  I am having a bout of eczema on my right thumb.  Benedryl will take it away if I remember to take it regularly.  Also, I have bee stings from a bee that was angry that I opened the outdoor trash can.  I think it was a wasp.

Wishing everyone a great coming Labor Day weekend.  Tell me if you have any plans for next weekend.
xx, Carol
Posted by Carol- Beads and Birds at 9:12 AM 22 comments: 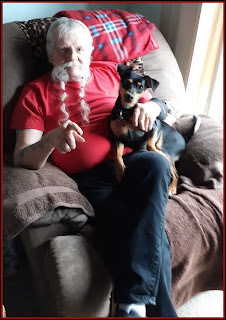 When you have been together this many years, much of your anniversary and the days leading up to it might be spent thinking about things that have happened in the past.  I am reminded how jealous my MIL was of the dogs my FIL loved over the years.  So much so that she actually over the years took two of them to the the Humane Society while he was at work.

I took this picture of Terry with his little dog Harley.  It brings me a lot of joy to see it.  A big man with a heart like a marshmallow...just like his father..who loves his dog and calls him Honey.  It melts my heart. I am happy to know that he has the same kind of love for Harley that I have know for several of the dog friends we have had.

We have two other dogs that he also loves and treats with affection.

Happy Anniversary Terry.  I love you more every day.
Posted by Carol- Beads and Birds at 12:00 AM 24 comments: