Endeavourer Challenge - A Walk In The Park 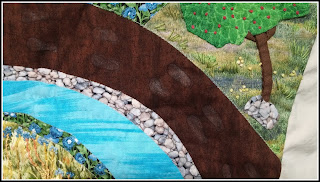 This is the project that I mentioned a week or so ago that Harley the Devil Dog destroyed.  Luckily I hadn't done any of the hand stitching on that piece or I would have been REALLY mad, even though Harley has the sweetest face ever.

The theme for this quarter is: A Walk In The Park.  I knew right away that I would try again to create a piece in a landscape.  I want to achieve a nitch in landscape work, but don't want to devote all my stitching time to the style. 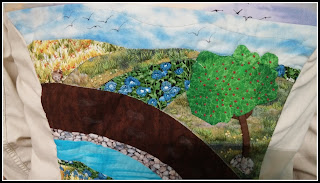 The piece is not exactly an Art Quilt.  I also knew when I thought about how I would approach the subject that I wanted it to embellish the back of a jacket I have.  I have given some thought to embellishing the front of the jacket on the lapels and pockets.  It's still in the "thinking about it" stage. 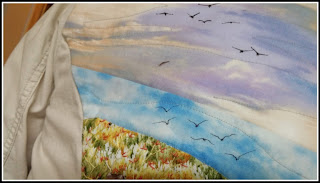 During this project I obtained a couple of books on Landscape Quilts looking for a technique that I want to pursue.  I am leaning toward trying the technique taught by Wendy Butler Berns as explained in her book Photo Album Quilts.

I drew the design, pieced fabric to it, did a little machine stitching , then did hand stitching and embroidery.  I added more birds to the ones on the sky fabric with a Sharpie, then faced the entire piece and stitched it to the back of the jacket.  Look closely and you may see a kitty peeking from behind the brush. 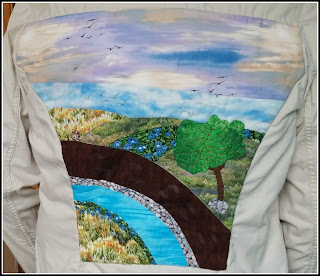 This is how the piece looks on the back of the jacket.  I just could not get a good picture of the completed piece.

There is a story to the picture I created.  You can read it on the Endeavourer Blog.

Please enjoy the pieces done by the other members.  It's always fun to see how everyone depicts the theme.

Grateful:  Today I am grateful that I was invited to joint the group. I have some great sewing skills.  Quilting is new for me and Art Quilts are a wonder.  I definitely had focus when stitching this piece and I am anxious to find out what the next Challenge Theme will be.
Posted by Carol- Beads and Birds at 11:30 PM 21 comments

Labels: A Walk In The Park Challenge, Endeavourers 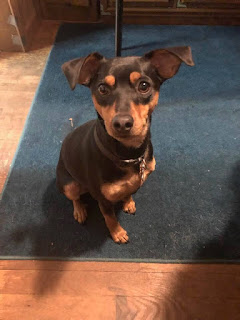 You've seen him before if you are frequent visitor.  You may remember how we got him.  How he claimed Terry for his person.  How he torments the squirrels.  Now I'll tell you that we HAD four baby squirrels in the big tree in the back yard.  Yesterday the third one went to Critter Heaven.  Terry says it is what his breed was bread to do...hunt rodents.  We find dead stuff all the time in the back yard.  Squirrels, birds, mice.  I live with that.  It's nature.

I few weeks ago, we only went out to take my sister's mail to her. (she lives across the street).  But then I asked Terry to drive past a friend's house who lives one block over.  She sold her home and moved in with her daughter and the new owners were doing extensive renovation to the entire house.  That lead to stopping to talk to my SIL who what sitting on her front porch. (all Terry's family live in this neighborhood).  We were gone about 20 minutes.

When we came home I immediately knew that Harley was a bad dog.  The other two greeted us at the door.  Turning the corner to enter the dining room I saw red.  No, not blood.  My current Endeaverour's project was in shreds.  Luckily the patterns I had made were not on the table.

So, with one month to go to the reveal I get a do over on a project I REALLY enjoyed.  But I am up for the challenge.  Dang Dog!!

Grateful:  Today I am grateful that I have three pooches that keep me on my toes and love me to death.

Do you have a furry friend that tries your patience?
xx, Carol
Posted by Carol- Beads and Birds at 8:09 AM 18 comments

Life is NEVER a Walk In The Park 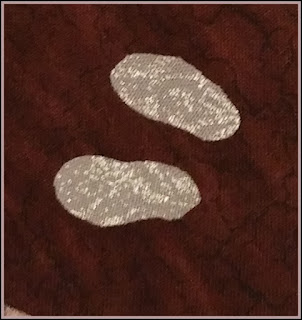 The upcoming reveal for the Endeavourers group is coming up.  The theme is "A Walk In The Park".  The phrase depicts whatever you are talking about is EASY.  Well, not feeling sorry for myself at all, I would dearly enjoy at least a year of Walk In The Park.

As far as the piece I am working on I needed feet so here is just a peek at what is coming soon.

Terry and my life has been having too many bumps in the road, mainly regarding his health.  We have been struggling to keep his BP in line.  All the past few years we worried about HBP but for the last almost year, it's been an issue to keep it UP.  He takes a lot of medications so it's been a struggle to get it all right.  Here is a warning for you. He has had RA since 1976 and over the years has taken Ibuprofen and Nsaids to control pain and inflammation.  Well, they injured his  kidneys.  He is in stage 3 of the disease and we have been unable to control elevations that all have a part in his disease progressing.  There is no repair.  There are so many ways all of his illnesses affect his body.  Managing all his meds and doctors is just about a full time job.

Mostly if I were to rant, it would be against those that ask how Terry is doing.  We say "Oh pretty good" because we don't want to go into it.  Then THEY say "Do You Think He Could" then comes whatever they want him to do.  NO NO NO! It just ticks me off.

Okay, on the lighter side.  We have a family of ducks living under the bushes in our front yard.  I bet the parents are the ones I kept chasing out of the pond in the spring. I think they all waddled off to the river, but I never saw them go.  I could never get a picture.

Then there was a kind of black bird at the pond.  He kept diving into the deep end then quickly back out.  He was wet so I couldn't really see what bird it was it happened so quickly. (There IS a birdbath in the pond area too).  Anyway, I kept seeing it happen and then I saw it was a Cat Bird.  The Cat Birds always have a nest in our Honeysuckle bush that is next to the house and I consider it to be the pond area.  Anyway, it's fun to watch them.  Robins go to the pond a lot and always sit on a ledge inside the pond near the side to take their baths.  We have an awful lot of critters to watch around here.

Northern Indiana is HOT and HUMID.  Temps are in the 80s and we have 90s forecast for next week.

Grateful: Today  I am especially grateful for Terry's great doctors.

Tell me something fun in your comments.  I'm keeping my chin up and finding things to laugh about.
xx, Carol