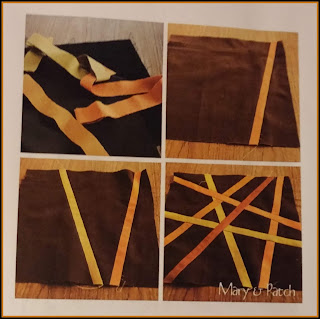 When the November prompt for the Endeavourer's Group was revealed to be IMPROV, I went to the dictionary to see just what the word meant.  Well, of course there was nothing related to quilting so I began to searching around blogs and books to get the idea of what I wanted to work with.  I saw a lot of scrappy blocks that I really liked.  I especially like the Vortex block that seems to be trending right now. I admit I want to try it.  But what I found to be more appealing was a tutorial that I found at Mary and Patch Blog.  If you visit the link, you can find the tutorial on the link. The picture above is taken from the tutorial.  I liked it because the math involved in stitching with her technique is easy elementary.  I admit it's simple, but hey, I need simple.

Anyway, as my life usually goes, I did not have the time to focus on stitching this project. The month for making this challenge started in August.  If you follow here, you may remember that August was not a good month for me and it led right into September when Terry was in and out of the hospital.  Then there were several doc appointments.  Then in October Corey surprised us by traveling home from Oregon for a visit.  They came in their 27' travel trailer where they sleep, except Nic pretty much stays at our house all the time.  So you can see I didn't have much time to focus on sewing. 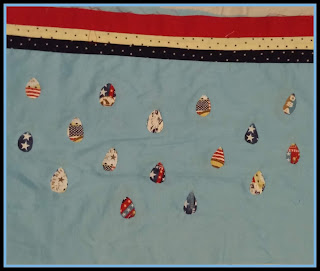 I volunteered for my Senator a little as I worked to get him elected and he is running now in a very close race.  Senator Donnelly...you may have heard of him.  I admit to being preoccupied with a lot of political things and I just could not get an idea out of my mind which has been festering for the last two years.  A simple version started with stripes representing the flag and the tears are falling.

I have not had time to complete this piece.  I could have rushed through it to get it done, but I no longer do that kind of thing.  The tears are done with hand stitched reverse applique which I have wanted to try.  I am enjoying it and I'm pretty sure I'll try a more elaborate piece using the technique in the future.  On this piece, I plan to embroider words that the flag represents.  I am feeling that the true meaning of what the flag represents is getting lost somewhere in a demagogue's rhetoric.

Nic will be here for a couple of more weeks.  I tell him when he leaves my ears will get a rest.  He thinks that's funny, lol.

Grateful:  Today I am grateful that we have had a visit with the kids.  You really do miss them when they are gone.

A Project Start and Doggie Entertainment 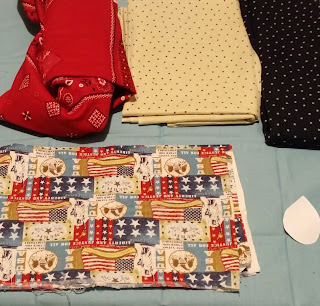 Just so you know there IS something going on in my sewing room, here are the fabrics I am using for the next Endeavorer's Challenge.

I moved my sewing machine to the dining room table which has been helpful in focusing on stitching.

We have been busing outside trying to get things put away for winter.  Also we have had septic/drywell issues.  A service comes today to give it a look.  I am hoping it's only roots blocking the path and that will be a relief.  In the Spring we had an estimate  for a new system system.  I almost threw up when they said $8,000 to $10,000.  Anyway, we'll see how things go today.

So, I'll leave you with a story about Harley, who is our critter catcher and has a new name...Clown Dog.

One day I looked outside and actually saw Harley climb this tree higher than my head.  He dug his nails in and up he went until he fell.  Since then I have been trying to catch him on video climbing that tree.  He has 4 squirrel friends that live in the tree. 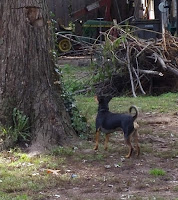 He will literally sit there for hours looking up that tree waiting for the squirrels to come out of their nest.  They are probably already in the front yard collecting acorns. 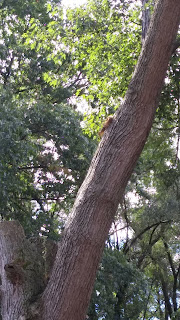 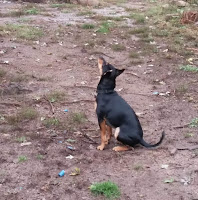 Nope.  Here is one of them.  He is up there chattering at Harley.  I know he is saying Ah Ha Ha Ha Ha...You can't get me!

But Still He Waits...for hours.  He'll be laying down in a minute.  When the squirrels get bored, they jump to the tree in the pond area that is fenced and off they go, leaving Harley to bark at them. 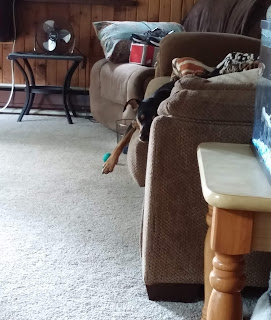 I let him in.  After a long drink of water he is sacked out on the couch.

But let me tell you, some times all four of those baby squirrels come to the front patio door and look in.  I KNOW they are saying
"Can Harley come out and play?"

Grateful:  Oh, just everything.  As life gets shorter...I'm 67 now, I concentrate on finding the silver lining.

How about you?  Do you think animals talk to each other?
xx, Carol