Is it a Blog or a Journal? 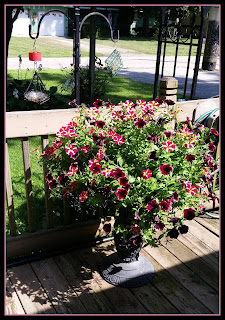 First, thank you to everyone that inquired if I am OK since I have not posted in almost a month!!  More on that later.

This wonderfully huge Petunia basket sits on my front deck in front of a patio window where we can see it when we look out from our recliners.  In the spring, my youngest grandson Ky asked me if I wanted to buy flowers from the fundraiser his church had going on.  Of course I said yes.  At $3 each I took 10.  What I got was 10 small petunia starts in the most amazing colors I have ever seen.  I quickly planted them in an appropriate size pot.  After a bit I thought they didn't look as healthy as they should.  Off I went to Walmart to look for a larger pot.  I came back with one of those tubs that we use to put ice and pop in for parties.  I wanted to drill drain holes in the bottom but ended up cracking it.  Well, that WAS a great water drain.  I had a birdbath in the back yard that had a leak so I brought it around to the deck and placed the flower bucket in the bowl.  Perfect height, and the perfect drain.  Each Monday I watered it with Miracle Grow.  Even in late September this plant is healthy and happy and measures 40" across. I have a couple of other birdbaths, so I think I'll put more of these on the deck next year.  The birds use the pond to bathe and get water from anyway.  Also, the humming birds chose this plant to feed from and ignored the feeders.

I have several friends that use their blog to document what is going on in their life so they can reference back to it later.  I hadn't really thought of my blog like that but I guess it is.

The last time I posted, Terry was having some health issues that we thought were caused by some virus.  By Sept 2 I took him to the ER.  The tests showed he had a kidney stone.  Neither of us has ever had one so we had no idea that's what it could be, but there was added worry because he has Stage III kidney disease so we have to be really careful about what drugs etc he takes.  So they sent him home with meds and instructions to call a recommended Urologist.  We did that an a few days later surgery was scheduled in a out patient clinic owned by the Urologists and was attached to the Hospital via a hallway.  The nurse got him all prepped but when the anesthetist came in to talk to him, she had a concerned look on her face.  She came in and out a few times.  When I told her he said he is dizzy, they laid him back and hooked him up to H2O.  I heard her ask if the ER had called back yet.  When I asked what was going on she explained his BP had dropped to 45/70 (I had been looking at the wrong numbers on the moniter).  They came from the hospital and took him to the ER. After tests the answer was that one of the meds they had prescribed for him the last time he was there can cause low BP.  Also he had been sleeping a lot and had not drank as much water as he should have the day before and that had caused him to be a bit dehydrated.  They sent him home with instructions to discontinue the med and drink at least 1/2 gallon of water every day.  The next day I got a call from the doc and surgery was scheduled again for the next day but at the Hospital this time.  The stone was removed and would not have passed on it's own.  It was 3 weeks from the time the pain began to when Terry felt he could continue his normal activities.  Between all this going on, family visits and other disruptions to our routines, I feel like life has been on hold.

My Go To craft for hospital stays is crochet so of course I started a new project.  I'll be back to show you that in a few days.

Grateful:  Of course I am especially grateful for the great docs we have. Terry's 45/70 BP scared the H*ll out of me. I LOVE that guy!
xx, Carol
Posted by Carol- Beads and Birds at 9:59 AM 32 comments