And Still August Drags On 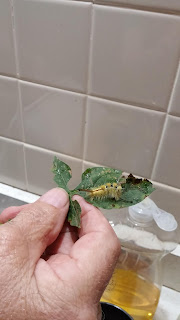 The Good Part:
You might ask me what is Terry holding in his hand on that leaf.  Well, here's the story.  A few weeks ago we went to visit the kids...that's what we call Corey, Alyssa and Nic.  Nic had a cute little plastic box with holes on the top.  There were a few sections in it and what I would call a ferris wheel.  It's a worm house.  He had two fall bag worms in it and an Army Worm..at least that is what he told me they were.  So when Terry was pruning bushes, he found this neat worm. I say he has a Mohawk hair cut.  So we took it to Nic.  He called a few days later all excited because the new worm had cocooned himself on the side of the box.  I was excited because he can see what happens next.  It's pretty cool.  This week he added a spider to the box.

So Now Comes The Get Done With It August Part:


On the 23rd, Nic came to spend the night.  Most of their house was packed and ready to move and he wanted to spend time with us before they left.  The dogs are always excited when Nic is here and sometimes Harley gets a little out of control.  Nic is a small kid and it's easy for even Harley to knock him over. So as I was scolding Harley for jumping all over Nic, I got caught up in the little Devil Dog and Bosco in the dining room and pitched myself into the hutch. I slammed my face on the bridge of my nose into the ledge of the hutch.  Talk about seeing stars!  I really actually DID see a huge one like you see in the comics.  I laid on the floor calling Terry who looked at me asking What Can I Do.  Still a comfort that he was there as I looked at the puddle of blood on the floor. It was a LOT.  Luckily it was coming from my nose.  My head was not clear at all and he drove me to the ER just in case I needed to talk to a doc.  The ER was packed.  We sat there for an hour and still did not see the triage nurse.  Another hour went by.  By then I could at least raise my head so we went home...without being seen. I wanted to lay down and I felt nauseous.  The next morning I woke up and it's pretty apparent that I broke my nose.  There is swelling over my right eye and blood on the white of my eye.  Also a big cut on the side of my nose possibly from my glasses that are strangely crooked.  The lenses look cloudy and cannot be cleaned.  They don't look like they are scratched, but I am not going to have them looked at until the bruise on my nose is healed.  I'm pretty sure I broke my left thumb too.  Just another episode in this all too "crappy" August.  I use that word because we just had the septic tank emptied, lol.  See, I still have my sense of humor.

We did go to Walmart last night and I asked at the optometrist store if my glasses could be cleaned.  Nope...they are scuffed so it's new glasses for me.  These are not that old.  Yet another August expense.  Needless to say I am taking it easy as I still have a dull headache and swelled eye.

We have a list of 7 things to do for the kids that they couldn't complete before they left.  They texted last night that they are eating crab in Chicago.  Alyssa will have an ultrasound today to find out the baby's gender.

Grateful:  Today I am grateful...really I am...that there are only 5 more days in August, lol.

Will August EVER End

The best thing about August is it is our wedding anniversary month.  We have been married 47 years.  Terry always says he raised me, and I guess he is right because I was only 19 when we got married.  For me, it was new found freedom.  We have been very happily married.

Like most of the world, it seems, we have had very hot and humid weather with way too much rain at times, and not enough at others.  Our outside well went dry.  It is what we use to water the grass.  More importantly we use it to refresh the water in our fish pond.  For some reason, a hose from our house city water just does not flood the pond out the same way the well does.  I'm fighting a chemical battle that just is not doing the trick, probably due to the continual heat.  The fish are thriving even in the green water.

Our home is cooled nicely by a couple of window air conditioners.  One is in my sewing room.  Without it, it just gets too hot to use the room for very long, even though there is a ceiling fan in it.  Since my room has no outside window, the air conditioner is built into the wall.  Since Terry is not able to lift even the small unit in and out of the space, my grandson did the task.  For me that involved moving a few things out of the way.  Not such a big deal, but if you know me, you know that one thing leads to another and suddenly I had the whole room cluttered up while I organized that side of the room.  I found several things to donate and more to move to another area of the house to store them.  Clearing the created clutter is a major task.  Today I'll work at clearing off my sewing table.  I'm contemplating moving my favorite Viking machine to the dining room table so I won't be leaving Terry alone while I sew.  Now I try to catch time while he naps and that is not working too well.  I hate to leave him alone on days that he is not feeling well and vegges out in his recliner.

While all this craziness is going on, I have been working on my patched jacket.  I'd like to wear it this fall.  It makes nice slow stitching.

Nic (6 year old great grandson) has also had once a week sleep overs with us.  He is a lot of fun, but totally disrupts any sewing!  His mom and dad (Corey and Alyssa) will be taking an extended vacation in a week.  We probably won't see the three of them for months while they travel west to find a new homestead and then to Florida to see her parents (Corey has not met them yet) then back home to pick up items they have in storage.  Luckily they have a friend that will rent their home here.  Their baby is due in January.  That seems like tomorrow with all they have planned for the next few months!  It will be a very difficult time for us when they move.

Grateful:  Just every single thing.  And my Crows who are still visiting and bring their babies.

Some Days Are Diamonds 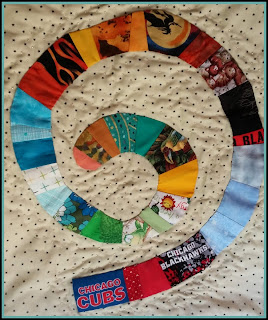 This is not the spiral I envisioned I wanted to make.  How do you draw a spiral that you can create in patches?  I admit, after some research it was still a mystery to me.  So I plodded along...with difficulty.  I will never divulge my pitiful process.

I can't make anything in these challenges, whether it was the Bead Journal Project, The Endevourers or any other group, that does not involve my deepest thoughts about the challenge and how it depicts me personally.

When the Spiral theme was selected, I was thinking of a spiral as being our path in life.  Each patch being a step, intentionally a little crooked and not uniform at all.  We learn as we go and as our knowledge expands, so does the spiral.  The stars in the background depict eternity and our life is just a moment in time.  There are little silver lined crystal beads sewn along the path.  I have a friend that absolutely loved John Denver.  Though I am not a fan, my friend repeated to me once a line from one of his songs that has always stuck with me.  "Some Days Are Diamonds".  So I have taken that phrase and over the years a good day is a Diamond.  The beads are only scattered close to the path, leaving room for future Diamond Days until we reach the end of our path.  I admit I ended this part of my path with a Cubs patch because I was born a Cub fan and will die a Cub fan...Die Hard they say were I was born in Chicago.

I have given some thought about how I could have achieved the piece my brain envisioned. Maybe I should have used a hoop when I added the diamonds, but in reality I should have used less tension on the thread.  Each bead is knotted after being sewn on.  I am so glad to be a member of this group.  I wonder what the NEXT challenge will be?  I'm pretty sure that I am going to explore another spiral piece, perhaps using hexies.

Have a Diamond Day!

Grateful:  Today, for an unexplained reason here, I am grateful my grandson and his family are safe.  Yesterday and today are not diamond days.
Posted by Carol- Beads and Birds at 12:00 AM 26 comments: