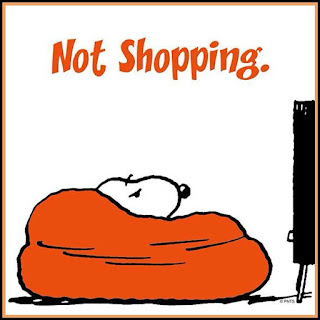 I admit it, I am not a Spendthrift.  The kids actually know me as being rather frugal.  I'm OK with that. I don't mind ordering from the $1 menu.  I comparison shop whenever possible, and use items to the end of their life.  But when I went on line and saw that Lowes was having a sale on Stainmaster Carpet with free installation, old carpet removal AND moving furniture in order to install PLUS they pay the tax I just had to look around on line to see what the brand had to offer.  That led to a trip to the store.  Of course I already knew that I would be buying new carpet for the living room because this sale was too good to pass up.  I would not admit to you how old the carpet in the living room is.  But you might guess it's age if I told you that we got it when my daughter was little.  I was going to replace it 5 years ago, but Corey brought 2 puppies home and the idea that it was a good time to get new carpet went right out the window. So new carpet wheels are in motion.  Which of course led to the purchase of paint. I could not pass up the opportunity to paint the walls and not have to worry if it drips on the carpet.  No, I'm not getting new furniture too.  It still has life and I'll keep it until it dies.  But, I DO look forward to switching up my wall decor.  I just hope I don't run out of steam before I tackle painting the dining room and kitchen and, and, and.

So how about you.  Are you getting the Spring Cleaning bug too?

Today I am grateful for my friend the Sun who has come to visit and lifted my spirits and made me smile.
xx, Carol
Posted by Carol- Beads and Birds at 7:14 AM 27 comments

They Called It A 500 Year Flood 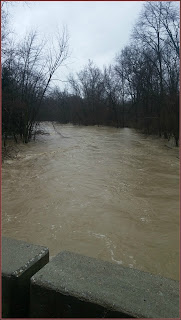 The flooding in our area made the national news.  We received 6 inches of rain in two days.  That would translate to between 50 - 60 inches of snow if it had been  cold.  The rain melted the foot of snow that was already on the ground when the rain started.  The Elkhart/St. Joseph river began spilling over onto land as they reached flood stage level.  This first picture is of the small creek that wanders though the area and dumps into the St. Joseph River bay three blocks down the road where I live.  I live on the high side of the river.  My road drops about 15 feet just before the bay. 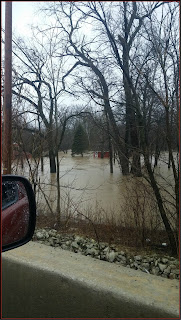 This is a picture taken from the bridge over the creek.  The creek would be on the right side of the picture.  This is the back yard of a home that is about 100 feet from the creek bed.  You can see a shed in the background showing the water level more than 1/2 way to the roof.  I have lived in this area since 1976.  I have only seen this house flooded one time back in the early 80s, but it was not this high. 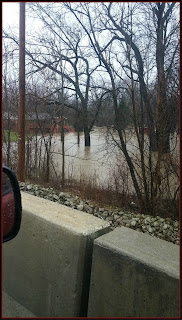 This picture shows the back of the house.  The water was surrounding the house as far as I could see when we pulled forward a little.  The news interviewed the owner who has lived there before we moved to this area.  It showed what he had done since the last flood to keep the creek out if flooding should happen again.  But still he had about knee high in the lower level that is not a basement, but part of the living area.  The water has receded leaving an unbelievable amount of sand behind on this homeowner's land.  The head of Homeland Security toured our area and declared Elkhart a disaster area.

I have been in a bit of depression.  Different than I can ever remember.  The kind that sends you to bed to sleep the day away.  Peaceful sleep that calms your mind but gives you crazy dreams.  Luckily it passed and I am back to normal with renewed ambition.

My grandson and his family have bought a house.  It's really temporary because they will be moving from the area at the end of the school year.  At that time, he will rent it to his best friend who's apartment lease will expire at just about that time.  On one hand I am so glad to have an empty nest again.  On the other hand I'll miss them and all of Nic's antics.  But if I had a scale, the pro side would definitely tip the scale.

Terry has suffered yet ANOTHER bought of the flu.  It's been a bad winter for us all health wise.

Today I am grateful for Terry. His recent health issues have had me worried.
Posted by Carol- Beads and Birds at 9:50 AM 24 comments