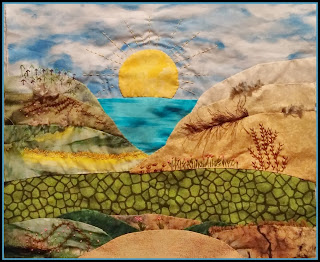 You may remember my post about joining this group a few months ago.  We are given a subject to depict in a quilt of any size.

I joined to challenge myself in several ways, including focus, interpretation, trying a new technique and generally just to enjoy myself while doing it.  Our first prompt was NATURE.  I thought a lot about what I wanted the piece to be.  I started a project journal to help me organize my thoughts.  I totally threw out my first idea.  I took my first piece apart because I couldn't make the fabric say what was in my thoughts.

We had 2 rounds of the flu going through the house since November.  Today another one started.  We had a wedding here right after the first of the year.  I didn't procrastinate starting this piece, but I admit I didn't have as much time working on it that I wanted to.

I will never be a person that wants to create traditional quilts.  I do, however, want to pursue landscape quilts and this was my first attempt.  I wanted to try piecing it using fabric I had on hand, but honestly I didn't have what I would have wanted to use.  It is entirely hand stitched using the freezer paper piecing method.  I think my work will always include hand stitching and embellishing.  I'll get better at that and don't want pieces to look like a crazy quilt.  I'm really not done stitching on this block, but it's done enough that I could post about it today.

I know the mistakes I made and will definitely research before I attempt the next challenge.  AND, I will definitely start the project as soon as I get the prompt...and finish early.

Grateful:  Today I am grateful for Janine and Catherine who have established the group.  It's a great group to be in.

Click on the badge in my side bar to be taken to the group blog and see what everyone else is doing.
Posted by Carol- Beads and Birds at 12:00 AM 31 comments

This Is NOT Funny

I resisted getting a Debit Card but finally caved.  Then I started reading a lot of reports that you should use a credit card instead of a debit card because you are better protected if your card is hacked.  So I began using the card then paying the balance when the bill comes.  I really like that because I can actually keep better track of how we are spending AND I like the cash back credits we get.

I usually only read emails once a day in the morning.  But I was waiting for some information so I checked it about noon on Friday.  An email from Chase caught my eye asking to confirm a purchase to IHOP.  Crap...there's another one.  This one is Nordstrom's.com for $131.00.  What the heck..Nordstrom's for $131.  What can you buy at Nordstrom's for $131?  A pair of socks maybe?  After clicking to say they were not my purchases, I hurried over to Chase.com to check my account.  There was an entry for $453 and then a credit for the same amount to another .com.  Then one for over $1000 and again a credit for the same amount.  There were also several other charges that took my card right up to the balance.  I had just checked my statement and planned to pay the balance but got interrupted.  Good thing or the crooks would have gotten away with more.

So I called the Chase fraud department to close the account and get a bit of information.  I confirmed which charges were mine and which were not.  I asked how the hackers could use my card when I had it right in front of me.  Here is some of the information I got and I thought I would pass it on to anyone that is interested.

Hackers get your card info if you swipe it in one of those fake readers you hear about being placed on gas pumps. (I always pay inside).

Hackers get your info if they have hacked a business where you have used your card.

Hackers can hack the company that issued your card.

After a Hacker gets your information they will try several transactions at .com companies such as Walmart and Amazon and then cancel the transactions in order to find out how high your limit is.

The IHOP charge was made on line, then possibly the order was picked up.  It was made in Lavonia MI, at least a day drive from me.  All other charges were to .com sites.

I am not sure if I will be asked for more information to prove the charges are not mine.  But my card account has been closed and another card is being issued.  Since my card has a chip, Chase is sending an envelope for me to return the card to them.

From now on I'm going to check my email more often.  I'm going to continue to use my credit card rather than my Debit Card.  I'm pretty sure if all this had happened on my checking account it would have been more difficult to get my money back.
Posted by Carol- Beads and Birds at 7:29 AM 20 comments

We Had Excitement, and Now We Don't 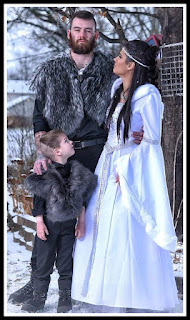 We had a wedding here on January 13, 2018.  It was a theme wedding, entirely planned by my grandson and his wife.  They are Vikings, wed outside with snow gently falling and temperatures not too cold.

It was actually a pretty perfect event with only her father and sister, his mother, brother and grandparents (that's us) and three of their very close friends.  The bride had cooked the food (I helped a little) but the Instant Pot was the star.

They live with us until his work contract is up in August, then they will move to the other side of the country.

The gift from the groom to the bride was a black Hummer3.

We raised Corey and he has always felt more like a son than a grandson.  Now we have a new daughter-in-law and grandson.

Today and everyday I am grateful that Corey has found someone to appreciate him and love him as much as he loves her...and their son.
xx, Carol
Posted by Carol- Beads and Birds at 8:39 AM 20 comments

What Word? What Goals? What Resolutions?

Should I select a "word" this year?  Maybe a Phrase.  Maybe I should take it a step further and select a verb to eliminate from my vocabulary.  I decided I'm not going to select a word this year.  Who remembers the word YOU selected LAST year?  I don't.  I should have put it on my bulletin board.

This "word" thing got me to thinking about the concept of selecting a word to help you focus on the direction you want the new year to take. That made me realize that in every single year, the main thing I want is to enjoy what I do.

Then there are New Year Resolutions?  I NEVER make them.  The only one I have ever made and kept was to remember to write checks into my check register.  Technology has changed that.  Now I used a Card for just about every purchase and save receipts to compare to my balance on line.

And what about goals?  This is a hard task for me because basically I fly by the seat of my pants.

Word:  So if I did select a "word", it would be JOY.  Not to just enjoy what I do, but to find joy in everything, every day.  I will say NO to procrastination.

Resolution:  Eat less.  Eat more healthy food.  Say NO to nibbling and snacks, except for grapes.  I love Black Seedless Grapes.  To be willing to change things up in the garden landscaping.

Goals:  To participate in projects that I have committed to.  To always have more than one stitching project in process.  To get an early start on the pond landscaping.

Grateful:  That I am able to stay inside.  Yesterday our low temp was -15 with a wind chill of -33.  But I DID fill my bird feeders.

Tell me if you selected a Word, Set Goals or made Resolutions.  What are you grateful for today? 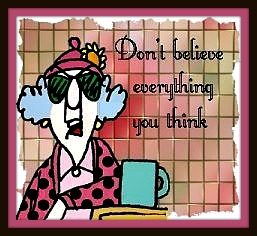 Today my friend Susan posted about a fix for some of you that have not been able to post comments here, or have had difficulty.  Please visit her page for an explanation and possible fix if you have the issue with your own blog.  I fixed mine, as I was unaware that the setting had somehow changed in a Blogger update.