The Not So Empty Nest 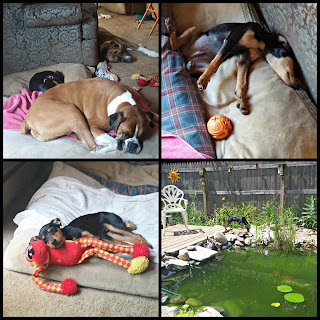 A few posts ago, I teased you with a picture of a new pup.  Well, honestly, he is not MY pup.  He belongs to Corey and his girlfriend.  He is Harley..yes..not to originally named for the bike they own.  He is a Min-Pin which is short for Miniature Doberman Pinscher.  He weighs about 10 pounds and Boscoe has taken charge of him.  I call him Boscoe's Barbie.  Tyson likes him, but does not PLAY with him much.  Boscoe and Harley go non stop, with Harley making sounds that I say sound like the Tasmanian Devil.  He loves to go to the pond area and explore.  The big dogs are not allowed there, but Harley can fit through the slats in the gate so he takes great pride in going in and out.  Harley likes to sleep on our bed with his head on Terry.  We have never in our life had a small dog except for puppies that grew into BIG...VERY big dogs. 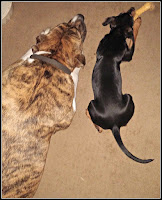 Here is a picture of Harley laying next to Boscoe so you can get an idea of the difference in their size.  They are both Alpha dogs and their personalities are so much alike.  It's hard to believe that Boscoe, who has always ruled Tyson, defers to the little dog.  They have learned to play together and Boscoe never gets too rough with the pup.  Their favorite game it...Harley steal the toy and run behind the chair and peek out to see if Boscoe followed then come out on the other side of the chair.  ALL DAY LONG.  It's pure entertainment and keeps us laughing. 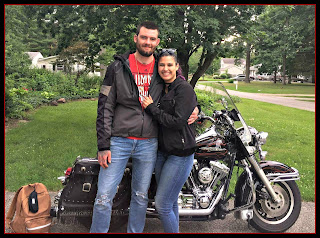 This is Corey and his girlfriend Alyssa.  We thought that Corey was going to move to Idaho.  I guess it was one of those "nice place to visit, but don't want to live there" places.

Corey should live in a more liberal state. It has been reported that Indiana is THE most conservative state in the USA.  I'm telling you, if he moves west, we are ready to go to.  Plus, Terry and Corey miss each other too much when they are apart. 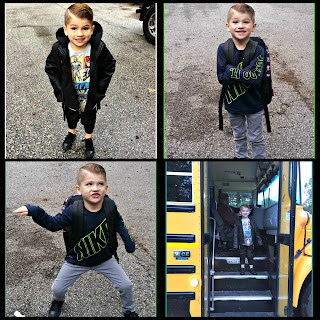 And THIS is Nic, Alyssa's son.

He is a great kid with a lot of personality and energy.  He just started school and these pics are from his first day and the first day he rode the bus.  He's a ham and reminds me of how Kyle was when he was young...always cutting up for the camera.  I've heard him say "Take my picture" several times, lol.

Anyway, for the time being the nest is not empty anymore, and I can truly say that we are happy about that.  I've always told Corey that when he least expected it, he would meet a girl that would appreciate him and love him the way he deserves. I just might be RIGHT!!

I can't close without asking you to say another prayer for those in Florida, Texas and the west where storms are reeking havoc and fires are disastrous as well.  Alyssa is of Cuban decent and all of her family is in Miami or Cuba which compels us even more to watch these horrendous disasters.


Do you have an empty nest?  If so, are you lonely, or relieved?  Do you have family in the disaster zones? Are they safe.  Alyssa's didn't evacuate.  Do you know someone that didn't?

Oh I am so happy for you. Corey is one handsome dude! I am glad things are better for all!

Oh what a lovely post....I loved every part of it. We do have an empty nest (boo hoo), without even any dogs....Just our dove, Norton, and two old geese. Some day we'll get another dog.
Our daughter-in-law's parents live in Florida. Yes-many prayers for them all.....

Girlfriend... all i can say is i'm glad your glad....Its wonderful that you can be happy that all that came to your front door... lol Me.. on the otherhand have an empty nest and wouldn't want it any other way... Hmmm.. my daughter and i living under the same roof again... I cringe..... but bringing a significant other and a child.. and a dog... i'd run away screaming... But i can see how happy it makes you and for that i'm happy too... Best wishes to all.. I have never been in a hurricane or told to evacuate... My grandparents evacuated years ago for a hurricane but darn if i can remember which one...They lived in the Florida panhandle and it was the '70's...Hugs! deb

Hi Carol! So glad they are happy. Great pics. I became an empty nester 10 years ago and I love it. But then again my girls live here in town so I see them a lot. I love having my quiet time and a clean house...lol Have a good weekend! Kit

Isn't it great to have a 'full' nest! I never wanted my kids to leave home...wanted them to build on the back 40! HA But they didn't...I am fortunate that my son/family and my daughter and her hubby only live 21 miles from me and are only one sub apart from each other! The four adults get along so well, travel together and eat out several times a month! I love that.
Yes, my sister lives in Apollo Beach..she just left their home to move to a friend 6 miles inland. They are to lose power at 8 tonight (not sure why???) and she also has her partners family members(3) staying with them as they left Miami, as well as two dogs and grandma! Hope they are well. Love your new little dog! How adorable to watch them play...they put smiles on our faces daily don't they!

Nice that everyone gets a long so well!

Loved to see the pup! I want a playmate for my Biscuit who wants ME to play with him all day. Since I already have three dogs (the legal limit which I would break but my husband isn't comfortable with) I can't get one for him yet and then, who knows whether he will be like Boscoe or Tyson!

If Corey is liberal its a good thing he didn't move to Idaho. I really think it is more conservative than Indiana! I saw someone share a flyer they saw while they were there for some kind of event and it came right out and said "Keep us white" showing not to be okay with caricature drawings of a black, a Muslim and a dreamer. I couldn't believe it although I knew they were conservative!

Lovely to see all your photos. It sounds like fun in your house with Harley and Nic around. Horrific news of all those areas affected by the hurricanes, though. I'll certainly keep Alyssa's family especially in my thoughts. It must be very hard to decide if and when to evacuate. I really hope things will settle soon and that everyone affected gets whatever help they need in rebuilding. I'm very grateful for the boring, moderate weather we have here!

Having kids and an extra dog around makes life fun. So glad the doggies are all getting along. I pray that Alyssa's family will be safe.

thanks for sharing this post-so happy for all of you-out west many states now adays are very liberal-Colorado is very liberal now. I always loved the west with the mountains-but at retirement hubs said no yes we have a friend that lives in the Keys that left and drove further north to a friends-then his friends home got flooded so they are now staying in his friends summer mobile home further north-but nothing is open-so no food or gas-not good Praying for the fire victims too

Yes, family and friends in FL, but as far as I know, they have all evacuated. I pray that Alyssa's family are all safe!

As a single parent, it was very hard to be alone. But the more I got used to it, the more I liked it! My Texas family is safe...Florida friends? Don't know yet!

How cute Harley is. Corey, Alyssa and Nic all look perfect together! We have family in Houston. They were all together in one house thinking they would be fine........then they were mandatory evacuated. They were able to go to their family's home that are closer than we are .......but they were not able to go check on their homes until 5 days later. They were so relieved to see that their homes were dry! It is such a worry to watch everyone go through these terrible times.......even when we do not know anyone. Prayers over all who are going through this!

Love the dog photos.........Harley is a cutie! How nice that your son, his girlfriend and her son visited you! I hope Alyssa's family made it through the hurricane okay. Our family live in the Houston area........but made it through the storm without damage

Such handsome animals. But Nick is a very handsome young man as is your son and his girlfriend. Guess I could have save myself some time and said what a handsome bunch..

I smiled my way through this entire post, such a happy one! From Boscoe and Harley, to Corey and Alyssa, then to adorably handsome Nic, how can you stand all that cuteness?! Also, when did Corey become such a hunk? I hope Alyssa's family is OK. No disaster zones here in NJ at this time, but extended family had to evacuate and stayed safe. Thanks for sharing so much joy, Carol!