Where Do Ducks Go? 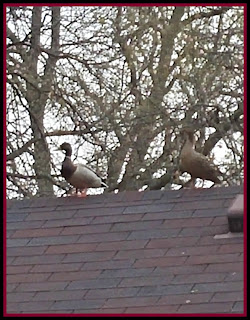 The first thing I do when I wake up in the morning is look out at the pond.  The other morning, there they were.  Two Mallards that frequently visit and have to be chased away.  I hurried outside to clap my hands, which usually does the trick.  Clap, clap.  WHAT?  All they did was swim to the furthest end and look at me.  Even when I opened the gate to go into the pond area to get closer to them, they just floated there.  When I waved my arms to scare them off, up they flew.  I thought they were going in the direction of the river, but nope.  There they landed right up there on the roof.  No amount of noise or arm flapping could scare them away.

There they sat, patiently waiting until they felt safe enough to return to the water.  Long enough for me to go back into the house and get several pictures.  They looked down at me as if to say they could wait longer than I could.  I went back in to get a cup of coffee, but when I returned, they were gone.

I don't so much mind the ducks in the pond, but I have read different theories about whether they will eat my fish or frogs so I am taking NO chances.  AND they leave horrible "droppings".

We have been spending as much time outside as we can.  It seems that we are only good for about two hours of yard work before we MUST sit in the swing and relax by the pond.  We have watched the Blue Birds select which house they will use for their next brood.  We had a Catbird nest in the Honeysuckle.  Watched a Cardinal pair raise a Cowbird  baby whose egg was left in the Cardinal nest.  Of course the Robin made a nest in an awkward place on the pole that holds the gate to the carport.

Our To Do list this week is to begin putting pea gravel on the walk way around the pond, more weeding, and weather permitting we'll begin to re-fence the side of the yard where the tree destroyed the present fence.  We used to do all that in a day or two.  Now we'll be lucking to have it done in a WEEK or two.

Grateful:  For just so many things, but for reasons I'll probably talk about in the future....to be sharing these days with Terry.  Oh, I know I said when I started listing things I am grateful for that I would not include the obvious, but it's just how I have been feeling lately.

Have you noticed something of Nature lately and taken the time to enjoy it?  I love to hear about it.
Posted by Carol- Beads and Birds at 11:42 AM 22 comments: