Happy Was Not Too Happy 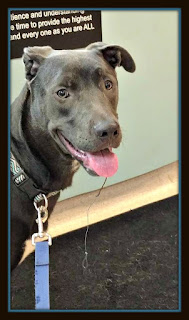 This is Happy.  He is one of my daughter's 3 dogs.  He is a Blue Nose Pit Bull.  He is also the MOST timid dog I have ever met in my life.

Shortly after Laurie left my house last night, I received a frantic phone call.  It was hard to understand what she was saying, but what I got from her side of the line was that Happy had a fish hook stuck in his mouth.  Look at his lip.  You can see it hanging down.  I immediately called the Animal ER and told her I would meet her there.  (Oh yeah, my husband advised her to cut the hook and push it though to get it out.....NOT).

Happy is almost a year old and is a Rescue Dog.  You may remember that Laurie just moved into a different house and thinks Happy found that hook in the garage.  It was a large barbed hook.  I'm thinking it might have been the type used for Coho fishing which is a big sport here with the St. Joseph River running through this area.  Happy was given an anesthetic and the hook had to be cut out of his lip because it was multi-barbed.  3 hours and $250 later, Happy went home a little tired, but Happy!
Posted by Carol- Beads and Birds at 9:23 AM

Yep... my hubby would have said the same thing....lol .... We had a Rottweiler 'Morgan' that tussled with a porcupine at 3am years ago ... and you know that dog laid its head in my husband's lap and let him cut everyone out.... sometimes dogs just know you wanna help and they cooperate... So glad you got it out and Happy is happy once again... Hugs! deb

Poor baby! It's a good thing you have an animal ER.

Wow, what an unsettling and scary thing for all! Happy doesn't look too bothered by it though. I hope he wasn't in pain. Your husband's thought might have worked, but I'd be too hesitant to try it. He is a handsome pup!

Oh my goodness! The poor thing! Glad he is all fixed now!

So glad Happy was OK in the end!
Barbara xx

Oh Carol ,oh what an awful thing to happen,glad lucky is fine now,what a relief for your daughter that its now out,ucky looks a lovely dog .

I'd be a mess trying to decide what to do about the fish hook! Happy doesn't seem too stressed, but I'm sure you and daughter were carrying all the stress for him.

Thank God it got stuck there and did not manage to swallow it.
The expense is why we probably won't replace Marybeth, who we
lost last month, she was a rescue 12 yrs ago. Glad everything
is ok now.

Oh, my gosh, that looks painful! I'm so glad you didn't do what your husband said. =)

Poor Happy! Your daughter must have been very worried. I'm glad it all ended well :)

Yikes! I'm glad he's okay! My dad used to fish that area and further north for Coho every fall. In fact, we were just in the St. Joe area a few weeks ago - got apples! :-)

Oh what a sweet dog! I'm happy that Happy is happy again!!!

Poor Happy to find a multi-barbed fish hook. I had one in my arm many years ago and it was very painful. Now Happy can return to his namesake of being Happy. He is very handsome.

Oh the poor doggie, I am so glad he was sorted out!
I would just like to say thankyou for the lovely comment you left on my blog about the Old Navy Man, I am so glad you liked it. I did not get all emails to my inbox as some went astray so I am only just getting around to checking the ones that were missed. I really appreciate you taking the time to leave such a nice comment, thankyou!

Quite an upset! Glad it worked out okay. He's a handsome boy! My daughter has multiple rescue pets, too. XO

Poor Happy. Hope he's all healed up now, and your daughter has done a good clean sweep to get rid of any other potential dangers. It's so hard, pets always seem to find the one thing that might hurt them.