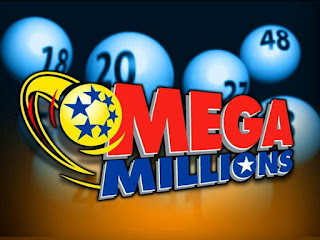 Whoever said it was NUTS!!

It would buy me a lot of happiness.  Get a new house that Terry doesn't have to worry about repairing.  Likewise for the car.  Several family members need stuff and I would be so HAPPY to give it to them.  Medical help for Terry that is out of out financial reach.  My grands can use some of that too.  My daughter could use a house...no more renting and moving and single parent struggling.  How about the Pet Refuge?  I KNOW they would love to share my HAPPINESS!!  I would be so HAPPY to make some little kids happy...and some elders too.

Recently the large Mega Million jackpot was won by someone around the Indianapolis Indiana area.  The winning number was drawn the day my brother in law passed through on his return trip from visiting family in Tennessee.  We got a lot of mileage in joking about him being the one that won and keeping it a secret from us.  It was during the time my father in law was in the hospital so I saw him everyday.  One day I brought him a picture of a house blueprint from the paper and asked him to add it to our wish list.    Sometime in the conversation each day someone would pop up and say Glenn will buy it.  We even planned to tell him that he had a great disguise when they showed the winner on TV.  DANG WINNERs  had an agent accept it in order to conceal their identity..  You can do that in Indiana if you accept the prize as an LLC.  So, we had great fun teasing Glenn.  It's always nice to dream about how you would spend that kind of money.  For me it's mostly about how I can make others as happy as I would be.

How about you.  Do you play the lottery and dream about how you would spend the money?  It seems like those jackpots increase to high values pretty quickly now.  Do YOU think money can buy happiness?

On second thought, maybe money can't buy me happiness, but ENHANCE my happiness!
Posted by Carol- Beads and Birds at 9:28 AM

I do not play the lottery.......but if I did and have the luck to win I am like you.......I would help those that I love and also give to charities. Have a beautiful week!

There you go ... it can ENHANCE my happiness.. You nailed it! Yes, hubs and i do spend some time dreaming about such things... and we the money really gets on up there we do buy a few tickets... Usually play our birthdays and a few Quick Picks.... You know just because you gotta be in it to win it i say...lol Somebody wins it why not me... Hubs has a whole host of answers for that one.... What would i spend it on....Definitely a new home... but where would we put it??? One kid on each coast..hmmm.. i know we'd buy two houses!!lol I mean if we're dreaming here...right? Ofcourse we'd help out the kids and their families... Do what we can ....Take some trips... But most of all , most important of all .... I don't ever want to have to worry about money again... so i'll be as generous as i can while still insuring that that worry is gone for my lifetime..... Hugs! deb

I am chuckling as I read this. We are of the same mind set. I would make sure everyone in my family was taken care of. Our huge medical bills would be gone and we would live close to the kids. Yes, I dream of an easier life.
Thank you so much for voting for me. Don't forget to vote again today. You can every 24 hours. I need more votes. LOL Have a wonderful day.

I always heard that money doesn't buy happiness, it buys choices :-) And yes, I love to dream about what I would do with that money if I win, too. Travel, quit working, help others......

Me to girl, we have it all planned , the amount each of our 6 kids would get .

I'm with you Carol, it would be enhancing. Funny thing I'm almost embarrassed to admit, I have never bought a lottery ticket, and I don't have any idea how to buy one! Lol.

I don't play the lottery, but I think everyone has imagined what they would do if they one millions of dollars. I've read studies that show that when given some amount of money, those who give it away get more pleasure than those who spend it on themselves. What is also curious is how or imaginations would play out in reality if we did win. I hope Glen remembers you as he spends his winnings! :)

LOL..... this “What if” is a game I have played before several times. IF we won the lottery (not even mega millions, but just even a few hundred thousand), Bruce could re-retire and I could afford the price-gouging health insurance company premiums. We could hire a gardener and housekeeper and handyman to weed it, dust it and fix it. We could ENJOY (= happiness) our lives more! Maybe even travel. Help our grown kids out with student loans and unforeseen expenses. Donate to Primary Children’s Hospital (saved my daughter’s life once), public TV and radio, homeless shelters, veteran centers, pet refuges, and our favorite cancer charity. OK. I’m done now. Life is great regardless!!! Back to work......

If one handles the money right it can definately take away allot of stress, and make ordinary living easier. I know it did that for me when I inherited money from my Mom last year--gave us freedom from bills and gave us security with money in the bank-so yes that gave us happiness-and I am able to help others when they need it now too

When I was in the US I played occasionally. There is a lottery here in Japan but I have not tried it here.

I TOTALLY agree with you! I don't need a 15 bedroom 10 bath house! I'd keep the house we have; pay off all the kids mortgages and bills; put enough money in trust for grands for college (we still have 3 to go!); pay off our bills...maybe get some new furniture and I would donate to Bernie (Place to Bark) for her to keep doing what she's doing!!!! Yes, money could buy you happiness...you just have to NOT be greedy!!! That's the problem with people...greed.

This made me smile, and your joshing with Glenn about it, too. Yes, we play that what would I do game around here, too. I don't think I've actually bought a ticket in more than a year, and probably not more than one or two the year before that. I just don't ever think about actually getting a ticket, only what I would do if I had that money. Like you, there are a lot of friends and relatives who would benefit with me. One thing I wouldn't do is wind up bankrupt in three years, as a lot of winners of millions do! Nothing is ever that easy, but it would certainly be nice. I don't know if it can buy happiness, but I think it can buy personal peace and that would make me happy. LOL good thoughts to go to sleep on

We don't play the lottery, but we do dream about what we'd do with a bunch of money. I guess I'd still go to thrift stores though!

Hi Carol yes i play tattslotto every saturday and i have been taking the same numbers every week for years,lol,havent hit the jackpot yet,but fingers crossed one day,lol.

I always feel bad when there is only one winner. Of course if it was me perhaps I would not feel as bad. Like you, I would spread the money around and make it do good. Right now a couple of new cars sound wonderful. And a few dollars in the bank just to look at would be pretty.

Oh I agree. thrift store shopping is not only about saving money

We do buy lottery tickets, only one at a time though and not for every draw, just when jackpots are big. We do talk about what we'd do if we won and our thoughts are much like yours. See that all the kids and grandkids are well provided for and buy a nice house by the lake.

I don't buy lottery tickets - but I would if I thought I'd win! I'd love pay off our mortgage and buy houses for my children and help out our wider family. Then there are some charities I'd like to support more... I don't think money makes you happy as such such but having no debt or concern about future bills etc would certainly cheer me up :D

I don't play the Lottery. We lived in Las Vegas for a couple of years and that experience alone convinced me that gambling wasn't to my liking. Friends would come to visit and want us to take them to the strip. We gave them directions, sent them on their way and said 'come back for dinner'!! *smile*

We only buy a lottery ticket when we fill the car with gas and that's normally about once every three weeks. If I were to win I would love to pay off the mortgages on my kids houses, just to make their lives a little easier. There's not much that I would want for myself and so I'd likely invest the rest and perhaps spend the interest on little luxuries now and again. As for money buying happiness, I'm not so sure - for me it would just make life a little easier.

may your dreams come true..with dreams you are closer to being a winner... i have never purchased a lottery ticket...