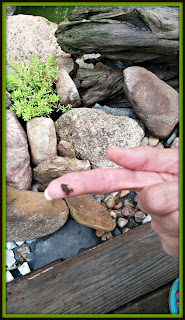 A few months ago I was so excited because we had literally thousands of tadpoles in the pond.  What the heck happened to them?  I researched a little and found that they eat algae.  Since Terry was putting algae killer in the pond, they may have starved to death.

Then about a week ago I saw about 10 LARGE tadpoles.  No legs yet.  So back to Google.  It takes about 3 months for tadpoles to develope legs. So that means if there ARE tadpoles left, I should see frogs any time now.

But look at THIS guy.  He was on a rock.  I was pretty sure he wasn't one of my tadpoles.  My fish girl says these are Tree Frog babies and I have hundreds of them hopping around, but mostly hiding under the deck, I think.  I love my little frogs and look for them daily. 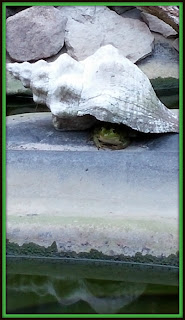 Oh look at my friend!!  Do you think that HE thinks that he is a turtle? I just love this frog.  I have tried to watch to see how he gets under that shell.  I just have to know if he backs in or WHAT!!  The other day there was a smaller frog and a baby frog out there, but I have not seen them again.  And there have been no frog serenades at night.  I wonder if they remain quiet when it's hot.  I haven't even heard any croaking in the day.  I miss their conversations. 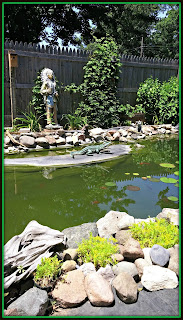 The viney bush growing next to the Chief is a Trumpet Vine.  I have seen other Trumpet Vines in the area that are blooming like crazy.  Right now mine only has a little blooming cluster near the bottom.  My Rose of Sharon have just started blooming also.  I always remember that mine bloom in August, but I have seen others around the neighborhood blooming like crazy already.  I love Rose of Sharon and fight to keep them every year because the multiply like crazy and Terry hates them.  I don't know why he thinks he has any control over what plants we have around this house, lol.  The ground cover that I planted in the rocks are spreading nicely but I am continually washing away spider webs.  I saw a couple of those Tree Frog babies caught in the webs so I have made it a daily ritual.  Plus, we have not had rain so the plants need to be watered. 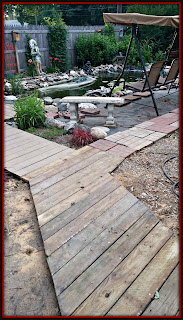 We are continuing to enhance and improve the pond area as time and temperature allow.

We still have some of the boards that my BIL disposed of when he put in a new deck.  Terry has made a boardwalk out to the deck that has the table on it.  He has also added a wood deck under the swing.  I think his next project will be to build a boardwalk where the patio blocks are.  We also have a picnic table that is not shown here that Terry uses as a catchall for his tools when he is working.  I think I'll move those patio blocks under it.  Keeping the picnic table in the pond area was my concession when we put a glass table on the deck.  Terry never saw a table that doesn't deserve to hold a tool, lol.

We have not been working outside in the past week or so.  The temps have been in the high 80s and low 90s with the humidity at about 1000%.  It's not healthy for Terry to be out there.  I suffered heat exhaustion a few years ago and have not done well in this kind of heat ever since.
Posted by Carol- Beads and Birds at 8:34 AM

I love to see frogs and turtles and other creatures! I hope it cools off soon.

Your pond is looking fabulous. We have a very old trumpet vine. I think it must be 20 plus years since we planted it. I read somewhere that it takes about 7 years for them to start blooming. Once they mature they go crazy. An added bonus is that every August we get visited by Baltimore Oriels who drink the nectar at the base of each flower.

Your back yard looks like it would be so much fun to walk around and explore it! Love the frogs!!

Beautiful, Carol! I hope you and Terry have many hours in that swing enjoying the fruits of your labor.

So cute to see all your critters Carol! I would love to see that frog back up under that shell too. When i was a lets say preteen i think i found a farmers pond just over the way from our house... OMGOsh it had a TON of tadpoles well i just had to have some so i got a bucket and lugged a bunch home!!!! They were eggs when i brought them home and left them in the bucket and watched them develop in the egg then when they hatched mom made me lug them all the way back to the pond...lol all your home improvements look fabulous!!! How much sun is that trumpet vine and rose of sharon getting??? That could factor into when they bloom and how much... A plant more shaded will take longer to bloom.... When i lived in TX i noticed the crepe myrtles in town bloomed about 2 months before mine did in the country... my theory was it was warmer in town so they bloomed sooner?? !! Big Hugs! deb

We haven't seen our little frog that was on the deck...miss the little guy....when I put fresh water down he jumped right in! Gotta love all God's creatures!!!! You have so many around you...you're so lucky to see nature at it's finest!! Enjoy!

The tree frogs in our back yard are so loud it is hard to carry on a conversation. I never see them, the clever little things, but it is amazing how loud such delicate looking creatures can be.

The heat this summer is deadly. My husband has had several battles with heat exhaustion. The first time, he was unable to answer questions when I took him to a First Care emergency for treatment. Now, he is more cautious, but still has had episodes that leave him weak as a kitten. Be careful, Carol!

It is really pretty there. Our frogs aren't saying much at night either and usually they are really loud.
I haven't even sen many toads, and usually I have at least two that stays in a particular spot in the flowers.
I even have warterr out for them. Be Careful in this heat. I have stopped working out in it until it cools
off a little.

I think that one frog wants to be a hermit crab! Fun post. I know there are lots of frogs around here because I can hear them but it is rare that I actually see one. I made a little recording of the bull frogs down in the creek area, they are rather ominous sounding! Wish I could come spend an afternoon with you in your lovely yard!

I grew up on a farm and every year I gathered some tadpoles and put them in my little aquarium and watched them grow and develop into baby frogs (or perhaps they were toads). It was great fun!

Your pond looks like such a beautiful place to hang out. Hope you see tadpoles and frogs soon.

I love tree frogs! We have one that perches each day on the top of a post. At night, he hangs out at our porch light and chomps bugs. I watch for him each day.