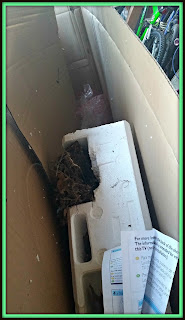 Last summer Terry and I enclosed our back porch will a row of windows and a storm door.  We often prop the storm door open so we don't have to actually go outside to let the dogs out.  Also Junior likes to lay on a rug on the porch.

Corey bought a 50" TV during the Walmart Black Friday sale.  He wanted to keep the box just in case there was a problem with it so I told him to put it on the back porch and we would dispose of it in the Spring.

Recently I have been seeing a wren on the porch.  I thought it had flown into the porch and couldn't find it's way out.  Frequently I heard a bird chirping when I let the dogs out. 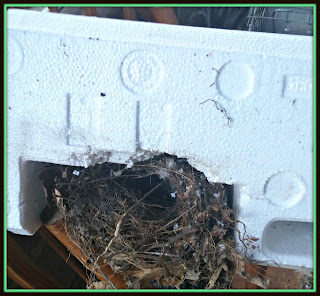 Saturday morning I thought I heard a bird in the box, but really didn't pay much attention to it.

Then Sunday morning, I still heard what sounded like a bird flapping around in the box so I decided to investigate.  Looking inside, I way what appeared to be a bird nest nestled in one of the spaces in the Styrofoam filler. Though I didn't see a bird, I could hear that there was a bird in the box. 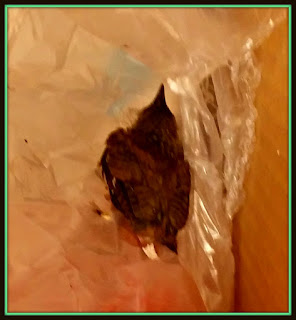 As I began removing other paper/plastic filling that was in the box I found this little guy inside.  I picked  up the plastic he was sitting on to get a closer look.  He was fully feathered and able to fly.  I really didn't want to leave him in the porch.  I feared he would land on the floor where the dogs would be happy to play with him.

So with Terry's help, I took him into the fenced pond area where we tried to leave him in the nest, but he flew out.  The mother bird was near by watching what we were doing.  We suspected that there might have been other babies that had already flown out, but this guy had been caught below the box filling.

Even though we have peeked in a number of bird nests over the years, I have never seen a live baby bird this closely.
Posted by Carol- Beads and Birds at 7:45 AM 16 comments 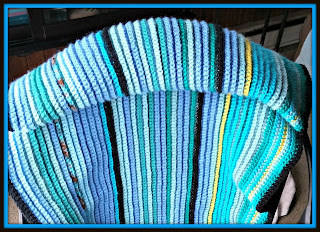 I'm still going strong on this project.  I must admit that it is using MORE than my stash, lol.  I suspect I'll be making some other projects with these colors next year!  Do you see those yellow rows?  That is the 70 degree color.  Two 70 degree days in March!!  Those days were nice, but really having 70 degree out of season weather makes it kind of hard to face several days of temps in the 30s that followed.  Here it is April, and like a lot of you we faced snowy days last weekend.  But I suspect that pretty soon I'll be adding more colors to this project. I like that this is a year long project.  The fact that you stitch a row according to what the temp of the day is, you can't just keep going.  I have found it the easiest to wait a week or so then catch up. For me that's easiest since the colors change so often.

Storms blew across the South last night with baseball size hail causing so much damage in the Dallas area.  I have learned not to complain about the weather too much.  It seems if it is calm and peaceful here, someone else is suffering Mother Nature's wrath.

I hope the weather has been kind to you.  If you are in the storm area there are so many praying for you.

Be safe, Be happy and have a great day.