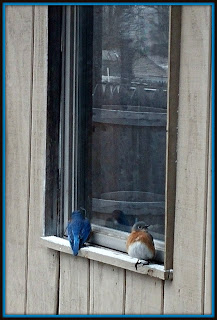 It doesn't take much to make me happy.  As you might guess from the title of my blog, birds make me very happy.  About 10 years ago we met a Blue Bird lover who mentored us on being Blue Bird landlords.  There is a little to know in attracting them, which includes a diligence in protecting them.

I snapped this picture a couple of weeks ago looking from my kitchen window to the bathroom window where I caught a pair, possibly seeking warmth sitting on the sill.  One of the four blue bird houses we have in the pond area is on the side of the house next to this window.  It's hard to know if this pair is actually the pair that called our yard home last year giving us the pleasure of watching two families mature and leave the nest.  I think they might be because they seem to favor the same house that last year's pair used.  We used to think the Blues migrated in the winter, but a few years ago I spotted one at our feeders and put meal worms in the meal worm feeder.  I was blessed to see so MANY Blues visit all winter long.  I always wonder if they are the babies that were raised in our houses.

Even though we are waiting for another blast of cold...REALLY cold weather including 10 inches of snow, the Evil English Sparrows seem to be building their nests.  And so our Blue Bird protection begins.  It seems a little early, so maybe Phil the rodent out in PA was right and we will have an early Spring.  Gosh, I hope so.

And MORE good news.  For about the past 5 or 6 years Terry has insisted that we put a heater in the fish pond.  It's what the experts say to do.  The experts that SELL heaters say it is a MUST.  Terry swears it doesn't cost much but I am not buying it.  Last fall we had a huge die off of his beloved Koi leaving only large goldfish.  I asked him if we could omit the heater this year.  He leaves the finances to me and with increased medication expenses I needed to cut costs.  I (and he) know our pond is deep enough to sustain the fish in a normal temp winter.  During the past week we have had a couple of 40 degree and even 60 degree days.  The ice on the pond melted.  Yesterday our fish were leisurely swimming just below the water surface.  I am happy to have those guys survive.  I don't really care to restock the Koi.  Hopefully Terry will feel the same way when the water garden shops open!

It doesn't take much to make me happy!!
Posted by Carol- Beads and Birds at 5:59 AM 15 comments 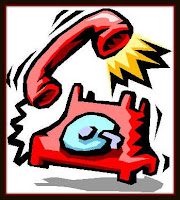 4:25 AM and the phone rings...It can only be BAD.  Since Corey just left, I expected it to be him and never checked the caller ID.  I grabbed the phone quick so the ringing wouldn't wake up Terry.

The person on the other end did not reply to my Hello...their finger hit the key pad because a couple of times I heard musical beeps.  Oh..this was going to be bad.  I expected it to be about my Father In Law...remember he is not well.

I heard a timid female voice saying ...Carol...someone tried to break into my house..I said I'll be right there and woke Terry up as I put on my shoes and coat.  The call was from my 85 year old sister who lives across the street kitty corner from my house.

4:30 in the morning and someone kicked in her back door.  WHO DOES THAT!!  Who kicks in a door and doesn't care if they are heard???? What would they do to her if they were able to actually go into the living area of her house?  As it is, Terry had installed dead bolt locks and it wasn't easy for them to break the door down.  They did kick in the bottom hinge.  Who knows why they left.  Too hard for them to get in?  The area is well lit.  There is a security night guard which was installed on a pole by the electric company right outside the door!

Her next door neighbor had heard the noise and called the police who were there by the time I got there.  The neighbor mentioned that the house across the street from my sis, which is two doors down from me, had THEIR door kicked in two weeks ago.

Basically I don't live in a high crime area.  It's a rural area that has grown more populated since we moved here.  We have always had some neighborhood trouble in the 40 years we have lived here but nothing serious.  In my opinion kicking in doors at 4 AM is SERIOUS.

Terry has a lot of experience repairing kicked in doors.  Before he retired, he worked for almost 20 years as a Maintenance Manager in a large local apartment complex.  Due to physical limitations, he is no longer able to do this kind of repair so he called a contractor he knows to replace the door.  A new door with a sturdy and maintenance free jamb, new locks including dead bolts.  We also bought a door security bar which is a bar that fits under the door knob and wedges tightly from the floor as additional security.  The effect is similar to a chair wedged under a door knob.

Short of having a security company install alarms, what more can we do to keep her safe? The door in question does not have a storm door.  The contractor suggested a security storm door which is really heavy and also has two dead bolts.  The weather was cold and snowy yesterday so that will be done in the near future.  Repairs cost $600.  Why would these guys think that they are entitled to steal what my sister has...or worse.  I still can't shake thinking of what might have happened.

Keep watch...investigate noises...look out for your neighbor...don't forget
Posted by Carol- Beads and Birds at 5:50 AM 28 comments 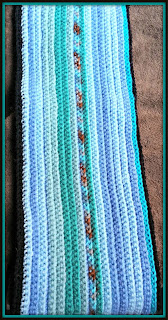 Here is my progress on the Temperature Afghan.  Each row depicts the daily temperature at 3 PM.  I had to adjust my color graph somewhat. The yarns I am using are worsted weight that I have in my stash.   When got into the month, I realized that I had originally selected colors, but failed to be sure all were the same weight yarn.

Each row is single crochet in the back loop of each stitch.  I suspect that I'll have to buy more yarn of some colors as the year progresses.

Our January weather was pretty mild.  February will probably be more of the same colors.

It's hard to stitch one row a day so I have been listing the temps in a calendar in my journal so I can stitch several rows at a time in a catch up kind of mode.

Today is Ground Hog Day.  On Thursday our local weatherman is going to tell what his prediction for our Spring weather will be.  Do you think he is waiting to see if Phil sees his shadow?
Posted by Carol- Beads and Birds at 6:14 AM 19 comments