The Revenant and the Wonderland Theater 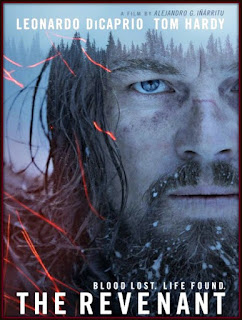 We don't often go to the theater.  Terry HATES to go.  But from the first time I saw the trailer for this movie I knew I wanted to see it in a theater in full screen and theater sound.  When I brought the movie to Terry's attention he agreed.  We saw it the second day it was released and it was amazing.  Before we entered the building, I heard people that were leaving say it was gory.  Yes, it was a bloody show in places. But it was so very well acted and the cinematography was absolutely amazing.  We definitely agreed that we want to see it again, but will probably wait until we can watch at home.

We are lucky that we have a theater about 1/2 hour drive away located in Niles Michigan called the Wonderland.  Terry and I have been going there for more than 25 years.  Showings before noon are $3, noon to 6 are $4, and after 6 the ticket price jumps to $5.  A large bag of popcorn and two large drinks cost $6.50.  The concessions for popcorn and pop are self serve and on the honor system that you will pay for refills.  I'm not sure, but I think that there are 6 theaters.  You can order tickets on line which includes selecting the seat you want to sit in which I highly recommend.  As you might suspect the theaters are small and if you go when a movie is first released you could arrive and find it sold out.  I think prices in our area for the chain theaters is about $10 per person with a bag of popcorn and a large drink costing $13.

Terry enjoyed it so much, I'm sure we will be going out to see movies more often!!
Posted by Carol- Beads and Birds at 6:55 AM

Leonardo D. Is a favorite, must see this one. Your theatre is a. very good deal!

This is on my list to watch Carol!! Especially after your glowing review... but i'm afraid we will no doubt go see Star Wars first...lol If only because hubby is unsure of this movie... He is not a big fan of Leonardo DiCaprio... However.. I'am ever since Titantic... I've liked a few of the movies he's made since then... I liked Inception and The Aviator... But he hasn't really made a movie since Titantic that just blew me away... maybe this is the one... Have you seen Shutter Island with him in it??? I liked it too... Fingers crossed you get to the movies more often girlfriend..:) I'm not sure about Star Wars.... The first three oldies i love....I remember my dad taking me as a kid... But the more recent three they made in my opinion were horrible.. the acting was horrible...i don't know what happened there... So, we'll see.....I look forward to seeing Harrison Ford as Han Solo again and the Wookie...lol Hugs! deb

I want to see this one too, as it is our favorite time period in history and this is based on a true story as well. This is one of those movies that one needs to realize what it is and know there will be some very realistic scenes and just be prepared for it. I had read the director was very particular with shooting of the scenes we have not gone to a theater in probably over 30 years-so will have to wait for this to come out to buy

I'll have to find a friend or wait until it comes out on DVD/netflix. Hubby doesn't like movie theaters so....but he thouht this looked good too! Hmmmmmm Maybe a rainy day here in Florida, I can talk him into it! He says the sound system is so loud...I'll keep you posted!

What great theater prices! I'd go more often if it was that cheap. Going to the movies is very expensive here in Japan.

Wow, sounds like a wonderful theatre, you are lucky. It is very affordable! So glad you posted this review, as all I have heard is how gory it was.... Maybe I WILL go to see it. Thanks.

I will consider this movie. You brought back memories as I remember Niles from when we lived in New Buffalo. I do not recall the theatre however it has been a number of years now. Thanks for the review and memories.

Wow, great prices. I have not even heard of this movie and I'm a fan of Leonardo as well. Just what time period is it in?
And if any main characters die in the end (the good guys) please private message me. I don't mind crying in the middle but
please don't leave me crying in the end. My daughter usually gives me a heads up, but I don't think she will go see this.
Have a good day. I got up and will be sewing, that makes for a good day.

I wanted to see it .... until I saw a preview of the bear attack. Yuck. Now, I am listening to it on my tablet and the bear attack doesn't seem so bad. I may pull together and go see it eventually.

We used to have a theater like that, but it closed down sadly.