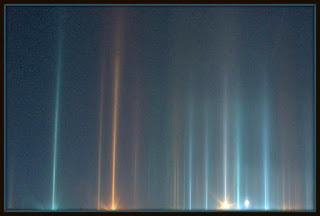 Have you ever been out on a very cold night and seen this amazing sight?

My grandson is 20 and leaves for work each morning at 4:30 AM.   The other morning shortly after he left the house I got a text from him, which was pretty alarming because he just left.  Since he drives down a dark county road to get to work, he saw this sight and was EXTREMELY excited.  His text said there were weird lights in the sky...all over the place.  I thought maybe he was seeing the Northern Lights.  NO!! He Texted.   They are pillars of lights coming from the earth.  Well, at 4:30 in the morning, Terry and I heated the car to see what the heck he was talking about.  I had never seen this Phenomenon myself, but looking down the highway, I could see they were coming from lights--some from street lights.

You could see little crystals of snow in the headlights, that could not be seen unless you were looking into the light.  Later in the day the weather man said he had received a lot of phone calls asking why the snow looked so crystally and what the heck are those light pillars coming from.  He explained that when the air is really cold it zaps the moisture from the air which causes tiny little ice crystals to glow in the light.  It's just really a beautiful sight to see. Have YOU seen it?
Posted by Carol- Beads and Birds at 9:20 AM

never have but would love to, i have seen the Northern lights one night from Ga.

wow very cool no I have never heard of this

Hi Carol I am getting a late start today. I mean a really late start. I have never seen crystal lights how beautiful, here in the city sometimes we can barley see the stars in the sky. Have a great day Carol ((hugs))) Cheryl....Snatch Joy~!~

Can't say that I have seen that, and what a neat thing to see.

Have a great week ~ FlowerLady

Amazing and very interesting. Never seen anything like it. Thanks for sharing!

ooooh - that's SO cool!! I've never seen anything like it. I saw the northern lights once many years ago but they were just white. How I would love to see them again.

How interesting! Thanks for sharing.

I have never heard of this. Beautiful!

Oh, this is gorgeous and somewhat mysterious. I love it. No, I've never seen it. What a wonder to behold!

I see like this quite a bit due to my poor eyes especially when it's wet outside so I hate driving in rain or on wet roads but I have never seen this as a natural phenomenon. It's pretty neat. Northern lights for everyone!

I have never seen these gorgeous lights and I can say I would love to see them. We have had super crystalline ice snow but not with these beautiful lights...of course I am not up at 4:30 AM driving in snow. As for Random Acts of Mail it is a FaceBook group I belong to. People are nominated each week to receive mail from us. The circumstances vary and can be from tragic to a 100th birthday and everything in between. I have done this every week for almost three years now. t is very rewarding to me. Wonderful Week Dear...

Wow! In our part of the world, this will never be possible, but I would love to see it someday! How cool that you got up and went to look, Carol!

Alas, it never gets that cold here! But it looks gorgeous!

WOW, that is really wonderful! You asked me about stitching on denim and how to keep fingers from getting sore? Well, I have to stop during the stitching on denim, it hurts my joints in my fingers if I don't. I use a thimble.......but denim is very hard to embroider on. I don't do much of it . Thank you for asking. Have a great weekend

Wow, I've never heard of or seen this phenomenon. Not sure it happens around here. Awesome! Worth getting out of bed for!

how cool those lights were! awesome that you were able to get pictures as well. There are no lights out here at night, so its probably something I will never see. thanks for sharing!
xoxo
vivian