This is NOT our Thanksgiving Bird!! 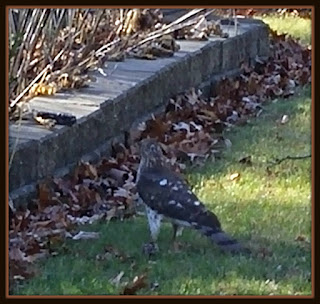 Nope, this isn't the Bird.  Well, it IS a bird.  A Sharp Shinned Hawk, I think.  When we pulled in the driveway the other day, before the snow, he was standing in the yard. 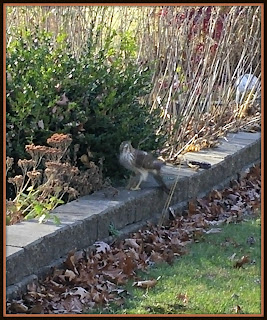 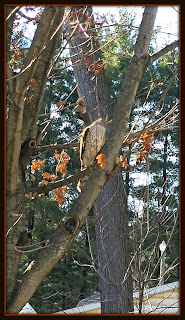 See that green bush...Boxwood.  I had a bird blogger friend that said you should always plant Boxwood in the area of your feeders so the little birds could hide from hawks.  My feeders are in the front yard so I can watch them from our living room patio doors.  There are several Boxwood planted out there.  When we drove up, there was not a bird in sight except for the Hawk.  His next move was to jump in that Boxwood.  Out flew about 20 sparrows.  He must have just wanted to scare them because he didn't chase them down.  Instead, he flew up to a branch on the tree and watched us taking picture of him.

See, here he is on the limb.  Make the pic bigger and you will see a squirrel sitting on the branch above him.  Did you ever hear a squirrel screeching at something and bobbing his tail.  That's what Mr. Squirrel was doing. There's actually a Titmouse sitting in a tree near by.

We have been visited by Hawks everyday.  Yesterday a adult Cooper was sitting on the deck banister watching Terry through the window. I couldn't see any birds except a Woodpecker out in the tree.  This Cooper lives in a stand of Pines you can see in the background.

I've read that when a Hawk finds your feeders you should take them down for a few days.  I don't do that.  I figure its all nature and can only hope that if they feed there it's on the evil sparrows. (My name for English Sparrows that are a natural enemy to my Blue Birds).

Wishing you a Happy Thanksgiving.
Posted by Carol- Beads and Birds at 8:01 AM 14 comments 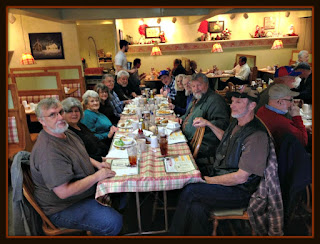 You may remember that I mentioned that my Father in Law has cancer.  At 91 years old, he is fighting it, but the chemo has been pretty hard on him.  It was pretty touch and go for a while with medications conflicting with each other.  For the past couple of weeks he has felt pretty good.  We were surprised when he said he wanted to go out to eat.  He wanted fried chicken from Das Essenhaus in Middlebury.  So, all of his kids that were available met at the restaurant.  My FIL is the second one from the back on the left.  The group was Terry's mom and dad, two brothers, two sisters with one brother in law.  The first guy in the front on the right is my brother in law Jerry's life long friend Frank.  Friends since kindergarten and one of the group when the three brothers were kids and always together. My grandson Ky came too.  It was a great time and we are just so happy that my FIL feels good and wants to make this a monthly outing.  A moment to be Thankful for.
Posted by Carol- Beads and Birds at 8:50 AM 15 comments

Do You Do Ebay? 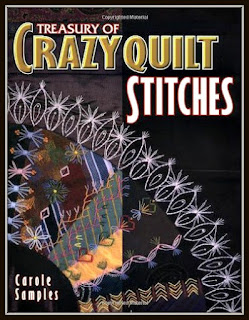 When I first became aware of Crazy Quilt, I began collecting books on the subject from all the well known stitchers.  I remember seeing this book back then and  I can never figure out why I didn't buy it back then.  After I became more familiar with Crazy Quilting and the artists creating wonderful stitching Carole Samples work became well known to me.  Many of the stitchers I knew through the blogs actually know her.  When I heard that Miss Carole Samples was offering her templates I quickly ordered them, even though I had not yet started my Crazy Quilt journey.

Anyway, I have never really shopped on Ebay, though my daughter knows it well and even made a living selling there when she was out of work.

I recently acquainted myself with Ebay when I had to give up wearing flip flops and acquired a love of Minnetonka  Moccasins.  I learned the art of the Bid and how to Make A Offer, even when the seller does not request a Best Offer.

I happened to notice that 3 different sellers were offering this book for 40+ dollars.  I have seen it listed on Amazon for over $100 and everytime wondered why I hadn't bought it while it was in print.  So I thought what the heck, I'll offer all three sellers $20 and see if any bite.  Well, one countered with a $3 discount.  One did not reply.  But one accepted my offer and will even pay the shipping.  The condition listed was "acceptable" but I'm sure I'll be happy with it.

Do YOU shop on Ebay?  Do you have tips for a new buyer?  This could be more addicting than Pinterest.
Posted by Carol- Beads and Birds at 12:00 AM 14 comments 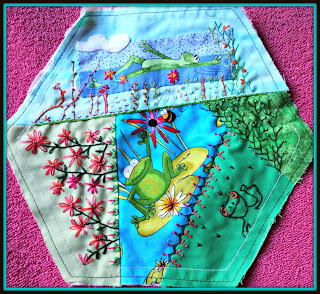 Here is block 8 for the 2015 Crazy Quilt Journal Project.  I have a rather large collection of various frog items that have been bought or gifted to me.  I LOVE frogs.  They are one of my Totem Animals always reminding me to be humble, take joy in simple things and to protect our planet.  Frogs never sit on the lily pads in our pond, but they do hug the sides or hop out for a bit of sun.  You just never know where you will find them.  I am always so glad that they never feel the need to hide when I am near. 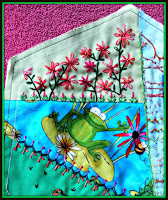 When I saw Lisa Boni's August block I fell in love with her field of daisies. I wanted to try them on this block.  They match perfectly with the flower in the focal fabric.

I'm hoping the project will continue another year.  It creates the inspiration to stitch everyday and provides a focus.  Thank you Kathy Shaw. 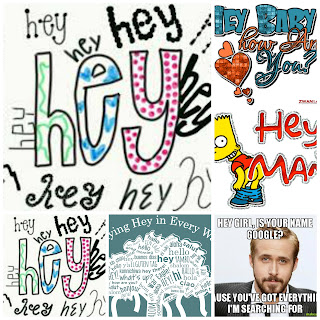 I watch CBS new.  This morning on CBS This Morning they did a collage of  President Obama saying HEY during some speeches.

Don't you wonder how news shows think of what they will put in a show?  A little entertainment filler served along with the news.  Anyway, since I use HEY all the time, maybe I should google it just to be sure the meaning hadn't changed over the years.

Yup, Yey is still another way of saying Hi!  Even the Urban Dictionary says so.

So now you know, it's still OK to say HEY!!
Have a great weekend.
Posted by Carol- Beads and Birds at 7:41 AM 9 comments

Did You Trick or Did You Treat? 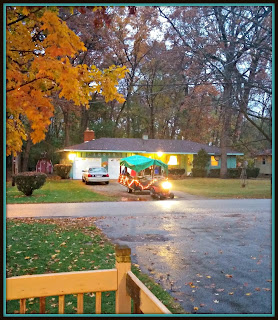 How was your Halloween?  Fun I hope!  We stayed in.  The weather was chilly and rainy all day.  But as the bewitching hour approached, otherwise known as Trick or Treat hours, the rain subsided and the ghosts and ghouls came out.  We took several pictures of the little visitors, but I won't post them here because I don't have permission to put them on the net.  I always make sure to speak to each one and comment on their costumes.  They love it and so do their parents.  Sometimes they just keep talking as they walk away to the next house. 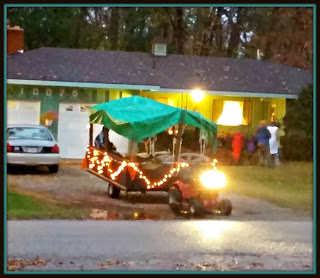 I DID take these pictures to share.  This is one of our neighbors who created this wonderful caravan to drive their grands to visit special neighbors.  Isn't it decked out!!  There is a toddler bed in the trailer for the kids to sit on.  The trailer is pulled by a trusted Wheelhorse.

We also had a hayride go by.  I couldn't get a picture.

I love Beggar's Night.  I have heard, and read several comments that people were glad that it rained so there weren't many kids out.

I LOVE it and I'm interested to know if you enjoy it, or do you think it's a pain.

Now I'm ready for Day of the Dead.  A spiritual day for me to remember and honor those that are gone.
Posted by Carol- Beads and Birds at 8:15 AM 13 comments