October Reminder and Every Picture Has A Story 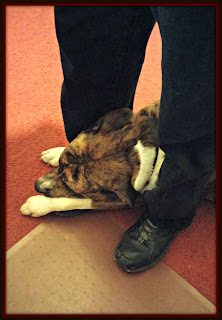 Boscoe is resting his head on Terry's foot while he waits. Actually, he is Terry's shadow and almost never leaves his side.  So what is he waiting for?  Well it all started with my trip to JoAnn Fabric where Terry left me while he went to the Habitat for Humanity Restore.  When he picked me up he had bagged TWO battery operated Black and Decker weed eaters for $10 each, less a 15% promotion discount they were having.  They didn't have batteries, but of course Terry has lots of THOSE in his tool stash.  We stopped to buy string cartridges for them, but when he tried to install them, he realized another piece was missing.  While I sat at the desk top searching for a phone number to call to order the part, Boscoe got tired of waiting so here he is, sleeping on Terry's foot.  That dog is one of the most special dogs that we have ever friended.  Maybe THE most special. So, TWO weed eaters final cost was $45.

While Terry was at the Restore, he checked out storm doors for the back porch that he has enclosed with storm windows.  He saw a couple that he liked.  But we have 3 Restore stores in the South Bend/Mishawaka/Elkhart area so we decided to check them all out before making a choice.  Luckily we stopped at the one in South Bend after a trip to the VA Clinic and found an amazing door.  I had been looking at new doors and even $150 doors were pretty flimsy and not what we wanted at all.  The one we found at the Restore was $50 and too heavy for Terry and I to carry together.  The top window opens to expose a retractible screen.  Perfect condition with handles included.  It was a steal and they even gave a senior 10% discount.  I have become accustomed to asking for a senior discount where ever we shop now.  You will be surprised how often they are offered and also a Veteran Discount. We are grateful for the savings and try to support businesses that offer them. 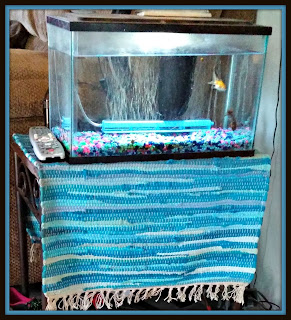 This is my little fish tank.  When Terry was buying fish for the pond, I saw the itty bittiest goldfish I have ever seen and Terry gifted me them.  This is a 5 gallon tank that sits across from my recliner so I can watch them.  They are very relaxing.  Corey's girlfriend, Brandi gave me a Red Claw Crab.  He was cool, but liked to hide in the filter so I didn't see him much.  It became a daily game to make him come out.  But they are escape artists, no matter how well you think you have them contained, they wait for their big break.  Unfortunately Boscoe was waiting too.  When we thought he had brought a few bits of food into the living room, he was really eating Crab Legs. 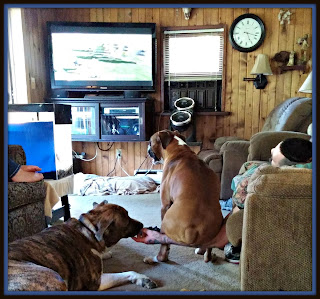 And here is that crazy Tyson.  Corey was laying on the couch and put his arm out to pet Broscoe.  We watched as Tyson kind of hunched down and began backing up and ended up sitting on Corey's arm.  We all scurried to get a picture.  Tyson weighs about 75 pounds.  Corey has strong arms!

Brandi is sitting in the chair on the left.  I don't have the picture she took, but Corey and Tyson both have the same look on their face.  We live on the Crazy Train!!


And finally, the October reminder. I rarely go to the doctor. I haven't had a complete physical for more than 10 years. It's become so apparent that Terry depends on me more and more everyday so a little niggling in my mind told me I should see my Doc.

Several things that I have noticed, I chalked off to older age.  Hair loss, some slight memory loss, dry skin and some other things.  Lab work shows hypothyroidism. I also had a mammogram.  It's been so long since I had one, the record of my last one is no longer in the system.  I'll check with my Doc today to see what he would have in my file.  The place I had the test is not where I would have gone for my last one, as I had to stay in Network for this one.

So the early reminder for October is get your Mammo!!
Posted by Carol- Beads and Birds at 7:22 AM

Tons in this post, Carol! Interesting how all the fun stuff always comes before taking care of ourselves. Congrats to you for doing it!

I get it every year like clockwork. I have heard that Medicare will no longer pay for routine mammograms for people over 65 starting next year. Seems as if that would be a bad thing to do -- they are going to have to pay out a whole lot more money than a mammogram would cost if a person doesn't have one and develops a problem. Just thought I'd pass this along.

You know how much I enjoy your stories about your dogs!!! They are so darn cute!! Glad you got your ckup!!! It is critical for us to keep up on our health so we can continue doing what we do!!! Not everything is attributed to old age! Now to get the hubby to listen to this! Hmmmmm

Your dogs are hilarious! I just love seeing them rest their heads and behinds! It is nice to be able to get a discount.........no matter how small. My son has worked for wal mart store for years and the employees get a card that takes off 10% off of non food items. He lets me use it when I shop there and the money I save does add up! Thanks for the reminder............I do not like lab work or tests!

Always fun to see what you and your family are up to. Animals are a never ending source of entertainment! Good for you to finally get checked out. It is easy to put those things off but peace of mind to get them over with.

Love the stories with you dogs... how funny he decided to sit on Corey's arm! Glad you took care of yourself and got the checkup out of the way, have had hypothyroid for years too... it's amazing how much better you feel once you adjust to the meds.

Sometimes it is best to surrender control to the dogs! I have hypothyroidism, too, and as Stacie says, the right meds will improve everything. :)

Your post made me smile and tear...we have to love anyone who loves pets..and get that test done x