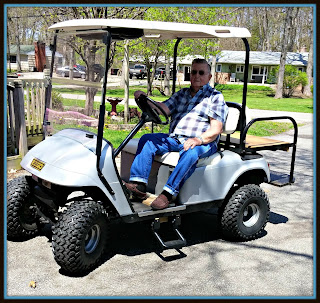 We have called Terry's dad Biggie Papa since my Sister-in-law's grandsons (her son Dave's sons) gave him that name when they were small.  It was their way of noting that he was their Great Grandpa.  You may remember that we live in a neighborhood that is three blocks wide and each road is 3 blocks long.  Most of Terry's family live in this neighborhood.  So when Biggie Papa stopped driving, Dave gave him his golf cart to use so that Papa could go to visit and site see whenever he wanted.  It's tricked out with bigger tires, a stereo and custom step up.  Last week he came for a visit and wanted to take us for a ride around the "block".  Terry's dad has numerous cancers at 91 chose not to undergo chemo treatment, though he did have radiation treatment that kept it in check for quite a while. He has taken a turn for the worse and wanted all of his family to come and visit him, but not all in the same day because that would be way to much company at the same time. I have a great respect and love for my father-in-law.  I thank him all the time for raising such a wonderful, loving man.  He thanks me in return for taking such good care of his boy.  He says when you get old you think about things and he is happy that Terry and I found each other.  I'm going to miss this man so much.
Posted by Carol- Beads and Birds at 7:21 AM

Bless the man who can go with dignity and beat the big C at its own game!
How are you and terry doing?
Dont forget to take time out to decompres

I agree with Barbara ~ Blessings on Biggie Papa.

God bless him Carol, how wonderful to have had such a special "father" in your life. My prayers with him and your family as he gets closer to going home.

Wonderful man. I so hope I could hope on one of those 'vehicles' if and when I reach 91!

You are so fortunate and blessed to have a wonderful loving family and best of all, you know it!

blessings to all of you hugs

He sounds like a wonderful man - and obviously a good role model for his entire family. Bless him, and you, as you go through this journey.