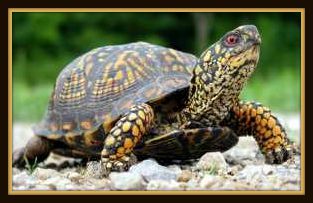 Our road is 3 blocks long and ends at a bay of the St. Joseph River.  Over the years we have seen many box turtles.  I have saved a couple from the traffic on the small highway which is 3 houses away. It's just second nature that if you see a turtle about to cross the road, or in the middle of the road, you stop and help him along his journey and take him safely out of traffic.

The other day, Terry, my grandson and I went to St. Joseph Michigan.  Even though we know the area well, Terry missed a turn and we took the LOOOOONG way home, if you know what I mean.  My grandson had his phone and used his GPS to guide us along the back roads back to a major highway.  It was a leisurely drive through the country side including roads along several of Michigan's lovely lakes.  There was not much traffic, though there were sporadic cars traveling to their lake cottages.  At a crook in the road, we found a turtle slowly walking across the road.  Terry stopped the car and other traffic while my grandson jumped out and put the turtle safely out of harm's way. We got thumbs up from the other drivers.  I was surprised that no one was angry to have been stopped.

Ironically that very night there was a spot on our local news cast that talked about how Box Turtle numbers have declined due to losing their habitat to new home building and being killed on the road.

Seeing that newscast on the very day we saved a turtle was like getting a Thank You from the Universe.
Posted by Carol- Beads and Birds at 7:24 AM

We often have the opportunity to save turtles near the bay, and I will stop to do so. One time when I was alone was traumatic for me though. After parking my car, and just as I was about to cross into the road to pick up the little guy, another car came along over the speed limit and flattened him. His shell was thrown into the air and the rest of him was still on the road. The driver never slowed down. Before going on my way, and with no cars in sight, I managed to get his remains off to the side of the road. Not that it mattered, but I couldn't stand the thought of him being run over again and again. I wish I'd had someone with me to stop traffic that day.

awesome-hugs for you and your grandson

How cool that you saved a turtle! I've been to St. Joseph, Michigan. Love the area! How lucky for you to live so close to that river!

What a neat post! Hurray, a turtle was saved.

I love getting signs from the universe, though the turn around is not usually that prompt. ;)

We have them here also. I haven't seen as many this year as we usually do. It seems, in the past, everyone I know has stopped several times to save a turtle.

We always try to save turtles too - last summer it was a rather gigantic snapping turtle that rather took exception to being picked up and deposited on the other side of the road. Silly thing didn't seem to grasp that we were trying to help him!

So happy you were able to save it and got a nod from the universe!!