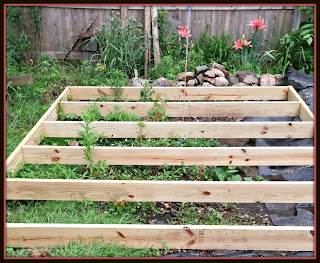 Gotcha!!  Nope, not movin' from this house. We lived here for almost 40 years.  One of the first landscape projects was to add a water feature that included a pond and waterfall.  We searched farmers fields and found piles of rocks which the farmers were more than happy for us to haul away. I'm talkin' TRUCK loads of rocks.  We had two weddings in the back yard take place in front of that first pond/waterfall.  I didn't work then and our back yard was like living in a park.

When my daughter moved into the house next door, our grandsons were about 2 and 4.  We fenced the yards together so the boys could come and go safely...and filled in the pond. 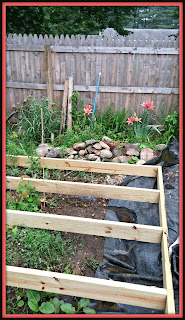 Eventually another bigger and better pond was born. Over the years, those rocks have been moved all over the back yard.  The present project, and final move, is taking place all over the back yard.  Between rainy days, we are putting a platform deck by the pond.  Unless we change our minds, we have a covered glider swing to set on it. Notice the pile of rocks that were moved to make a place for the platform.  You may also notice the weeds..they were pulled before the platform was started but we have only had just a few days without rain in the entire month of June.  Before the planks are added to the deck form, I'll put a heavy layer of newspapers down.  It's a technique I have used over the years to keep weeds from growing.  It works well and water won't puddle like it would if we used, say plastic.  It's a great way to recycle newspaper as well. 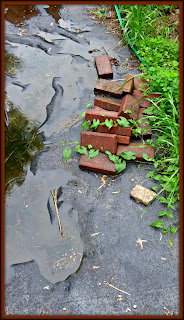 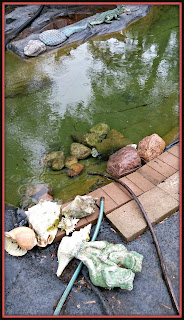 And some of those rocks are going into the pond to make a hiding area for the fish.  I'll add plants to the rock area too. 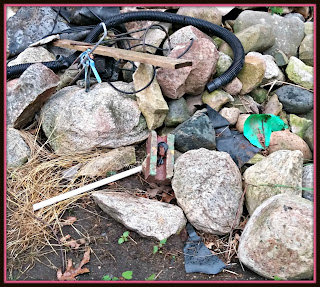 This is a new rock garden.  This little area is next to the fence that keeps the dogs out of the pond area.  However, they love to dig under the fence here because rabbits and toads live on the other side. So far, the rocks have kept them out. Rain has stopped my progress. The next picture shows how much the weeds grew in just 2 weeks since I started this project!! I'm moving some ground cover to this area that we bought when we moved 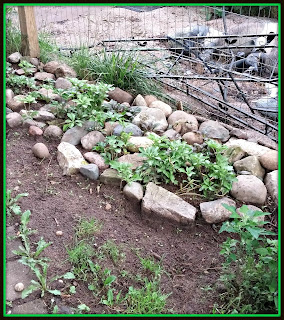 here and has flourished in the shade. Blogger is not co-operating with my picture placement and commentary.  The last picture is Boscoe, looking up at me while I am looking outside at the front deck.  I'm sure he is wondering when the heck the sun will come out!! 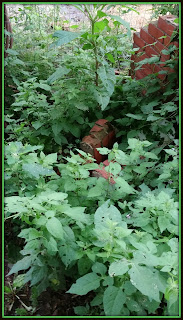 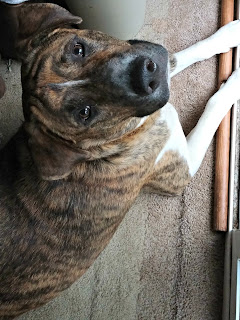 Posted by Carol- Beads and Birds at 8:58 AM 9 comments 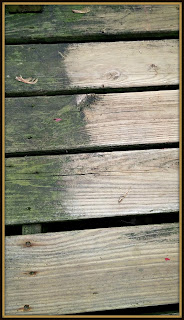 Two patio doors open onto a  deck on the front of our home.  Admittedly, it has been a few years since I gave it a good cleaning and a coat of stain.  Cleaning and painting the deck is definitely going to be done this summer.  So I began to research what product to use to clean it.  I watched some amazing videos that showed a guy spraying on a product and rinsing off with a hose..amazing.  Simple. Expensive and definitely not in my budget.  Or, I should say not a priority for my purse. Ok, I'm cheap.  I'm not afraid of work.  I find what others think tedious to be meditative time.  I live on a Crazy Train so Wax on/Wax off appeals to me.

So, more google searches were in order.  I was thinking why not use bleach water.  I make my own mix of bleach, water and Dawn to use as a household cleaner.   Google told me that bleach breaks down wood fiber so the search was still on.  Somewhere I found information that using an Oxygen cleaner mixed with water would clean the wood nicely.  In this picture, you can see the Before and After  results.  Totally amazing.  I put one scoop in what was probably about a gallon of hot water.  Took the mix, a scrub brush and a short sit stool out to the deck to try it out. It really honestly didn't take much effort at all.  I brushed the mix onto the boards, scrubbed a little and washed off with a hose.  One thing I will do as I precede is to rinse the brush before I put it back into the oxy mix to keep what I am putting on the next area clean.

The next step will be to paint it with one of those restorative wood paints.  If you have any experience with restoring a deck, I'd love hear what you learned.

Now, if the weatherman will just cooperate with a little sun, I'll be ready to continue.
Posted by Carol- Beads and Birds at 8:27 AM 12 comments 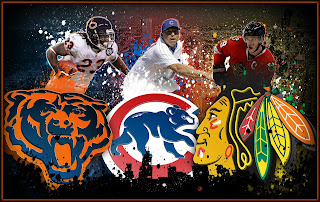 Didn't know that I'm a huge Chicago sports fan, did you?  Well, I am. I always have been.  I was born in Chicago, so it's instilled in me to be a die hard fan, win or lose.

I think I first noticed the Blackhawks because of their logo. I never watched the games when I was younger, but became a fan of the game when I dated someone that went to Notre Dame and we often went to their games.  It was a natural progression to become a Chicago Hockey Lover.

Though I have never been to a game at the stadium, my daughter and grandson go often. I love it when they come over to watch the games. 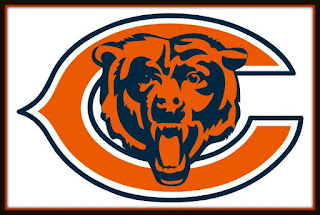 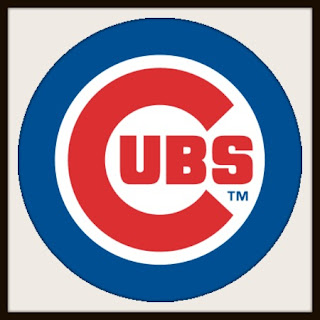 What can I say about the Bears.  At least Terry likes football and doesn't mind watching the games, though we don't like to watch the game at the stadium.  I'm waiting patiently to see if changes to the coaching staff will bring on a much awaited winning season.

My favorite all time Bears player is Dick Butkus. What a great Linebacker.


My dad was a huge Cub fan.  When I was little, we went to the games a lot. My Grandma was a big fan too.  As she got older, heaven help you if you stood in the way of her vision of the TV when a Cubs game was on!!

My youngest grandson is a big Cubs fan too.  I love it when he comes over to watch the games.  Terry hates baseball so I don't usually put the game on unless Ky is over.  Also, we don't always get the game on a Chicago station and I absolutely cannot stand the ESPN announcers! What a lot of stupid irrelevant small talk.


Terry is not a sport fan.  He makes a lot of comments when games are on that drive a true fan crazy!!  I have learned to ignore him, but last year Kyle would not come here to watch the Bears.  And didn't we all jump all over Terry when he criticized Corey Crawford the other night!!  We hold our own!! 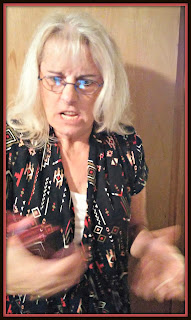 Yup, this is me.  Terry is always taking candid pictures of me.  Usually he catches me while stitching, or eating, or watching TV in my recliner...no make-up and hair uncombed.  I find them and delete them because, well they are boring.

I found this one on his phone while searching for pictures taken at Kyle's graduation.

I love it.  For some reason it makes me snicker..laugh at myself. That's a wonderful thing to be able to do.  LOOK at me!  My face is as animated as my hands appear to be.  I look mad, but AM I?  You can see in my glasses the reflection of what I am looking at.

I challenge you to give my picture a caption.
Posted by Carol- Beads and Birds at 7:39 AM 7 comments

A Birthday and A Graduation 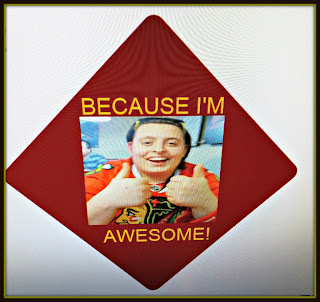 Today is my youngest grandson's 18th Birthday. I can't believe the years have flown by.  It fun to remember things about him growing up.  He is the family comedian. He's the kind of guy that everyone enjoys being around and he is truly a good friend.  I know that about him because he has lots of true friends and a few have been around since he was in grade school.

This is the topper I bought for him to put on his mortarboard.  I'm pretty sure no one else in his graduating class will have one...how cool is THAT! The picture is his signature pose, and he IS awesome!!

Congratulations, Kyle.  You are truly One Of A Kind
Posted by Carol- Beads and Birds at 9:04 AM 8 comments

Finding Peace from Within 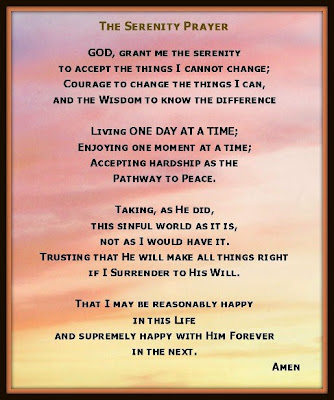 I have always been a passionate person.  A fight to the death for what I believe in kind of person. When I was just 20 years old, a man that I had a great deal of respect for advised me that I should pick my battles and that I should realize some things could just not be changed.

I was young then, but I took his words to heart. We lived through some rough times and I prayed a lot.  Some years later I found The Serenity Prayer.  It has become my motto in life. But I never knew there was a long version.

Today I am reminded to see someone I love as they are, and not how I want them to be.
Posted by Carol- Beads and Birds at 6:00 AM 9 comments