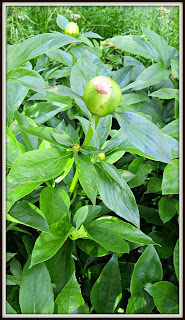 Star White posted a picture of her peony.  That brought back to me a memory of MY peonies.  When I was young, my mom had a lot of them but I never really paid attention to any special attention she gave them.  When we bought this house, there were a lot of them on the property.  The first year, we noticed ants on them.  I see an ant and out comes the ant killer.  Then I read an article that talked about how ants help the peonies to bloom by eating off the peony sap on the blooms.  Well I know now that the theory is a myth, but it's funny to think back about it.

My husband is a Belgian that thinks he has a green thumb and all plant knowledge automatically comes to him by right of heredity.  When he moved those peony, they never bloomed.  That was long before the internet so for me, a trip to the library was in order.  A wonderful gardening book informed me that we had planted them too deep, so out they came again.  Now they are firmly and permanently planted in the pond area where they are very happy.  And I am happy to say they are thriving and full of buds. 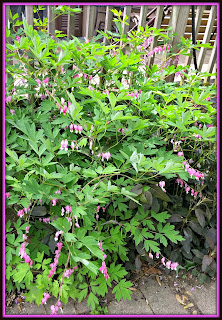 Every plant in my garden has a story.  This is the bleeding heart planted in the front of the house in front of the deck a few years ago. One of my daughter's friends gave her a start of it about 10 years ago.  It did OK, but never really took off.  When she moved to an apartment she brought it to me and put it right where it is now.  I probably would have put it in the pond area, but just left it.  After about 2 years, man did it take off!!  It thrives there and encroaches on the small path that is along the deck.  Terry cusses it all the time because it gets to big, but in a word...tough, I'm NOT moving it.  But we are re-landscaping the pond area and I'm going to try to get a start going back there. 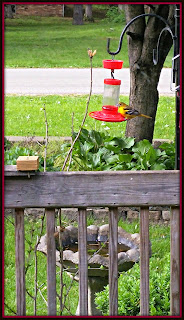 Finally, here is a picture of a female Oriole that blesses our feeders.  She and her mate come often.  He is the most vibrantly colored male I have ever seen, but I haven't seen him lately to catch a picture.  They spend some time by the pond too.  After their brood hatches, we won't see them at the feeders anymore, unless it's to grab a bite of suet.  But I do plant birdseed in an area of the back yard and I often see them there so I suppose there is something back there they like to eat, or maybe just the bugs.

My gardens aren't picture worthy yet, but hopefully our weather will allow me to weed and mulch soon.

Have a wonderful weekend.

So lucky to have orioles coming to your feeder! I've only ever seen an oriole once and that was just a fleeting glimpse.

Hi Carol! thanks so much for stopping by and for sharing a bit of your garden too. I imagine a pond surrounded by peonies must be glorious! and I now want to find out if bleeding hearts will grow in Alabama. Have a great weekend :)

I feel like I've toured your yard! It sounds lovely, especially the peonies and oriole. When you say you "plant" birdseed, hmmmm...I'm not sure what you mean.

Gorgeous!!! I just came in from picking a few roses for the windowsill in the kitchen. So thankful to have all this beauty around me and a blessed husband who weeds and trims and nurtures.

We get a flock of oriels in August when our trumpet vine is in flower. They pull off the trumpet part and drink/eat the nectar. We only get them for a couple of days and then they are off again.

It's a beautiful time of year with so many flowers and birds making their appearances. Glad you are enjoying it, as am I. We have wild bleeding hearts all throughout the forest, so beautiful. Not as big as the domestic ones but they are everywhere.

The flowers of Spring are beautiful. I can remember my parents had peonies and I have had them at all of my houses. The ones we have now, where transplanted from our old house. They are just so pretty. Enjoy,