Boscoe Is The Best Frog Catcher

Yesterday was a gloriously beautiful day.  Perfect sun, 85 degrees, perfect.  Terry has been tweaking the pond.  We relined it last year.  He has decided to put in a couple of little "areas" where the water is more shallow and "he" will plant water plants where the fish can hide.  We always put in new water lily, water iris and other floating plants. This year we will try yet again to plant permanent water plants.

A Little Background:  Last year we had to fence the pond area again.  I always liked it fenced.  It gives it a more park like feel.  A few years ago Terry took the fence down to make it easier to mow.  BUT, along came Boscoe who loves to fish,  and EAT fish, raw and alive.  He's a good fisherdog.  So last summer Terry relented and fenced the pond area again. (See me smiling ear to ear?) 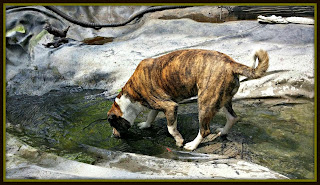 So, we were working in the pond area draining and cleaning the pond and Boscoe, who cannot be separated from Terry, was looking so sad at the gate that Terry let him in the "park".  He sniffed around for a while.  When I gave him a drink from the hose, I guess he decided that the green stinky water in the pond looked more inviting, because in he went. 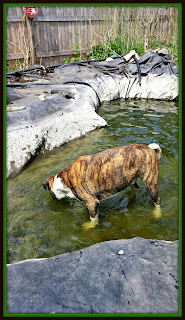 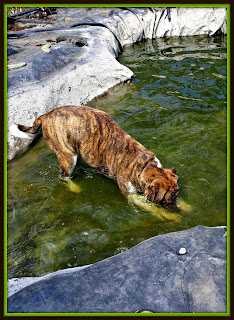 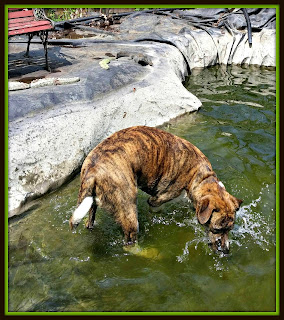 A little while later Boscoe found the deep end. Yup, he can swim.  Yup, even after I gave him a bath he still STUNK...not his coat....his BREATH.  Crest to the rescue.
Posted by Carol- Beads and Birds at 8:07 AM

our furry family members always intrigue me-always getting into things I would never think of -lol looks like he is really enjoying fishing-lol we tried planting water plants Larry really loves them, but they just didn't seem to survive the next year-and here we seem to either be in drought condtions or flood conditions in the spring so I think that does not help either. anxious to see what you purchase to plant-I really love seeing them in the water

Well, let's hope he didn't catch anything!! But I'm sure he still had fun???? What a hoot!

Such fun to see Boscoe fishing - not so much fun for the fish and frog though!!

Love the pictures of Boscoe in the water! Glad he didn't get the frog. My dog Pepper used to catch the goldfish in my dad's mini-pond. I don't know why but Dad kept restocking it. I tried and tried to teach the dog to stay out but he would stand so still waiting for the fish that they would come out from their rock safety space and boom, he'd get one. Glad you have the fence as that makes it so much easier to keep the dogs out without having to watch them every minute!

What great pictures. Boscoe sounds like a character. His coloring is just gorgeous!