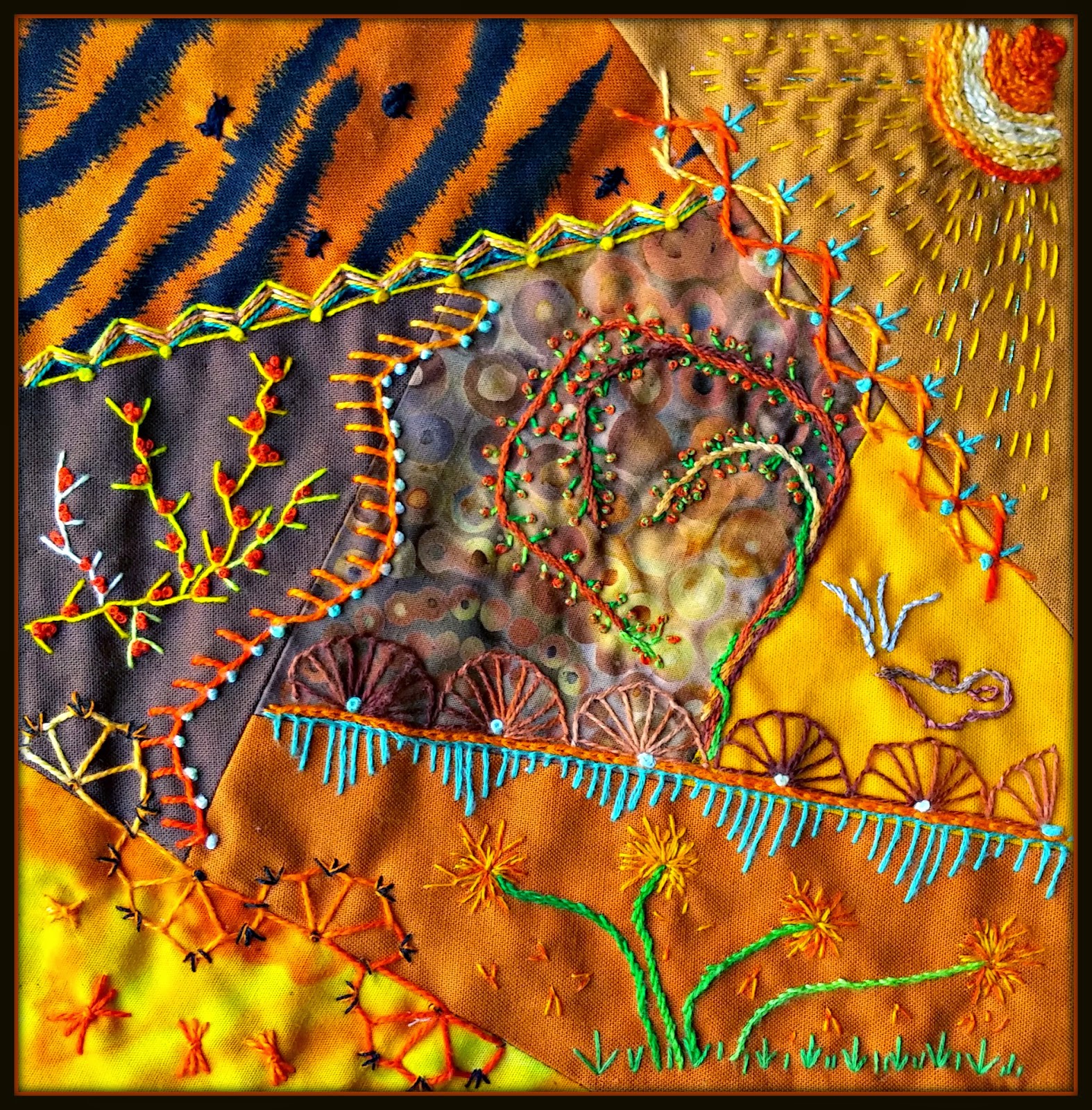 Here it is the end of April and I am sharing a picture of my March block.  But that's OK.  I'm a little behind, but I have been steadily stitching.  Though this is only the 3rd block I have done, it has been easier going.

When I started stitching CQ, I worried that I would never learn which needle to use with which thread.  But as with everything, with experience comes knowledge.

I also took time to make better templates.  The first set I made following Kathy Shawl's instructions that were given to students in the Beginning CQ class.  I also have Kathy's book. I used Kathy's templates again, but I bought a small punch and proper plastic.  I can tell that after I am better acquainted with a larger variety of stitches, I will become more comfortable using the templates that I have accumulated from more experienced stitchers.  Oh, and even though I have more floss than I care to admit, I already want to accumulate more for shiny applications.

Even though this project is supposed to use laces and ribbon embroidery, for now I'll be sticking to flosses and stitched motifs.  There are some bugs up in the left corner crawling around on that poor tiger's coat.  They got me looking for bugs to embroider.  I can see there is so much on the stitching horizon for me.

I took the picture of the block while standing in front of the patio window in the living room.  There is something about that window that draws the critters.  Remember when I posted the frog that came to greet us?  Well this little guy made himself comfortable and seemed to be watching to see what I was up to.  Maybe I'm just a critter magnet!! 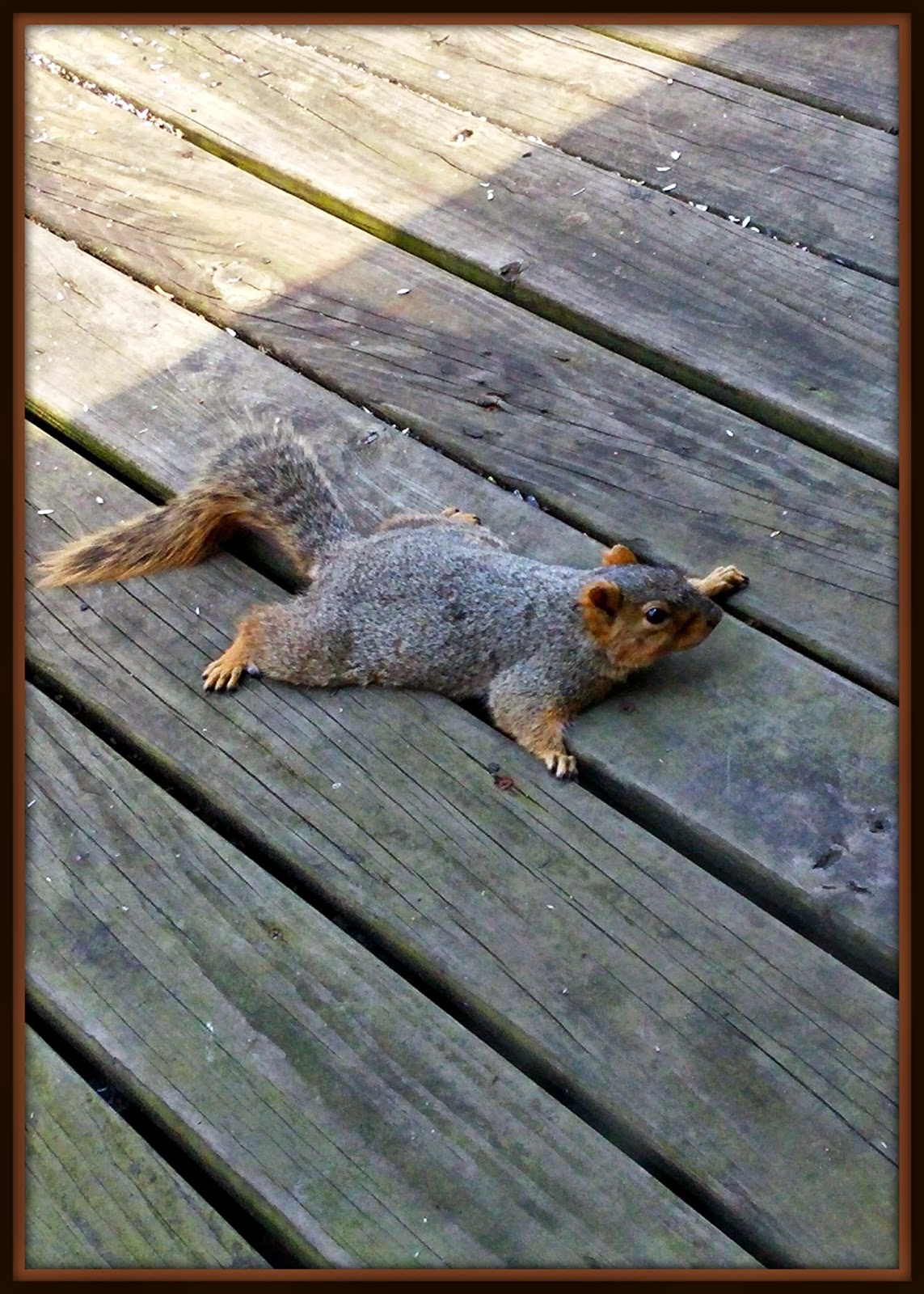 Have a really great day!

Birds and Frogs and This and That--It's Earth Day!! 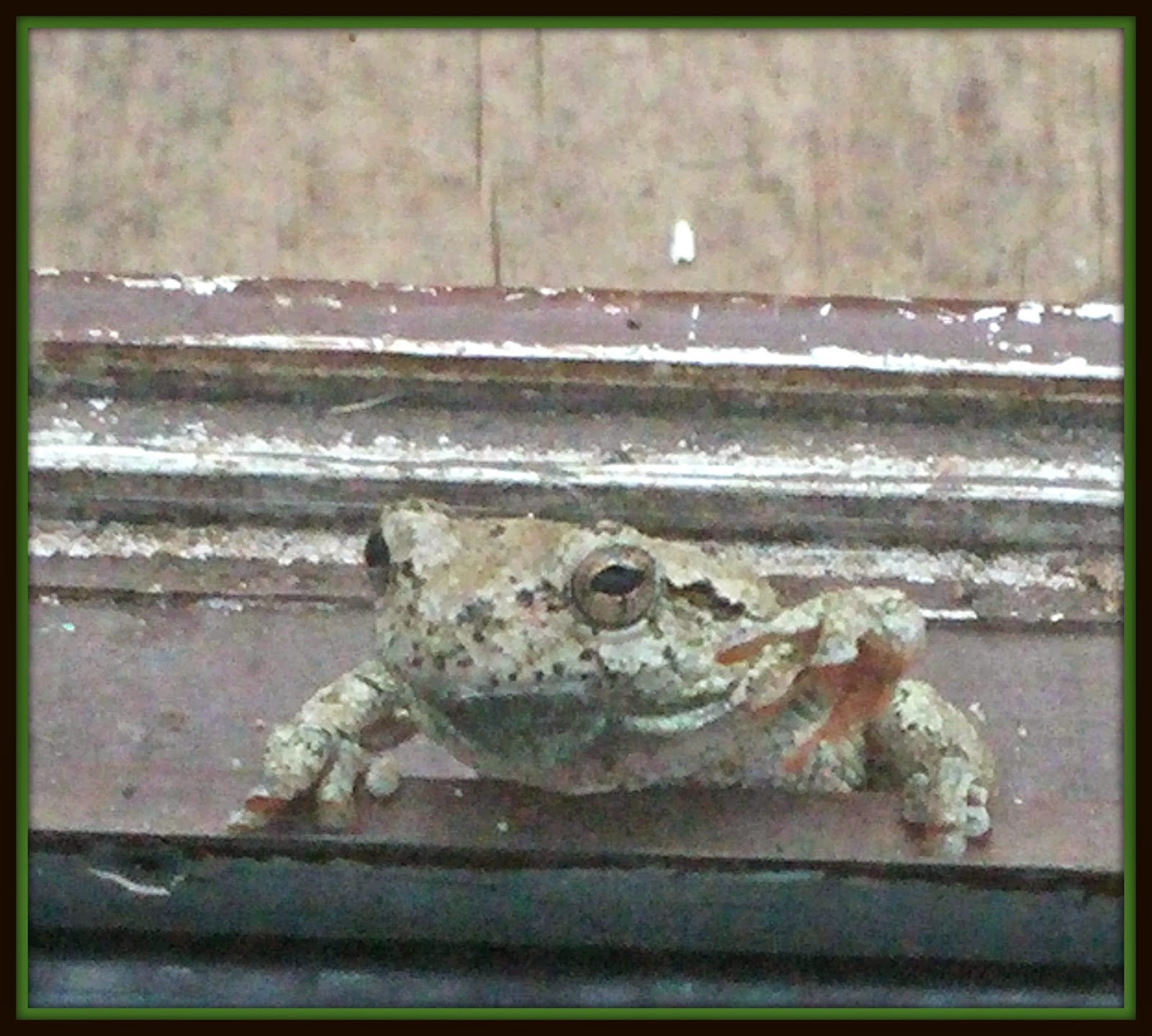 I absolutely LOVE this photo. Terry was sitting in his recliner which is next to one of our patio doors in the living room.  He caught movement out of the corner of his eye and called we over to see what was on the deck.  I looked through the window...nothing new.  Birds at the feeders then I caught a little movement near the floor.  I spotted this little guy.  He seemed to be waving as I snapped his picture.  Amazingly small, he is about the size of a dime.  That's TINY!!

After a few minutes he hopped away, heading for the pond I think. 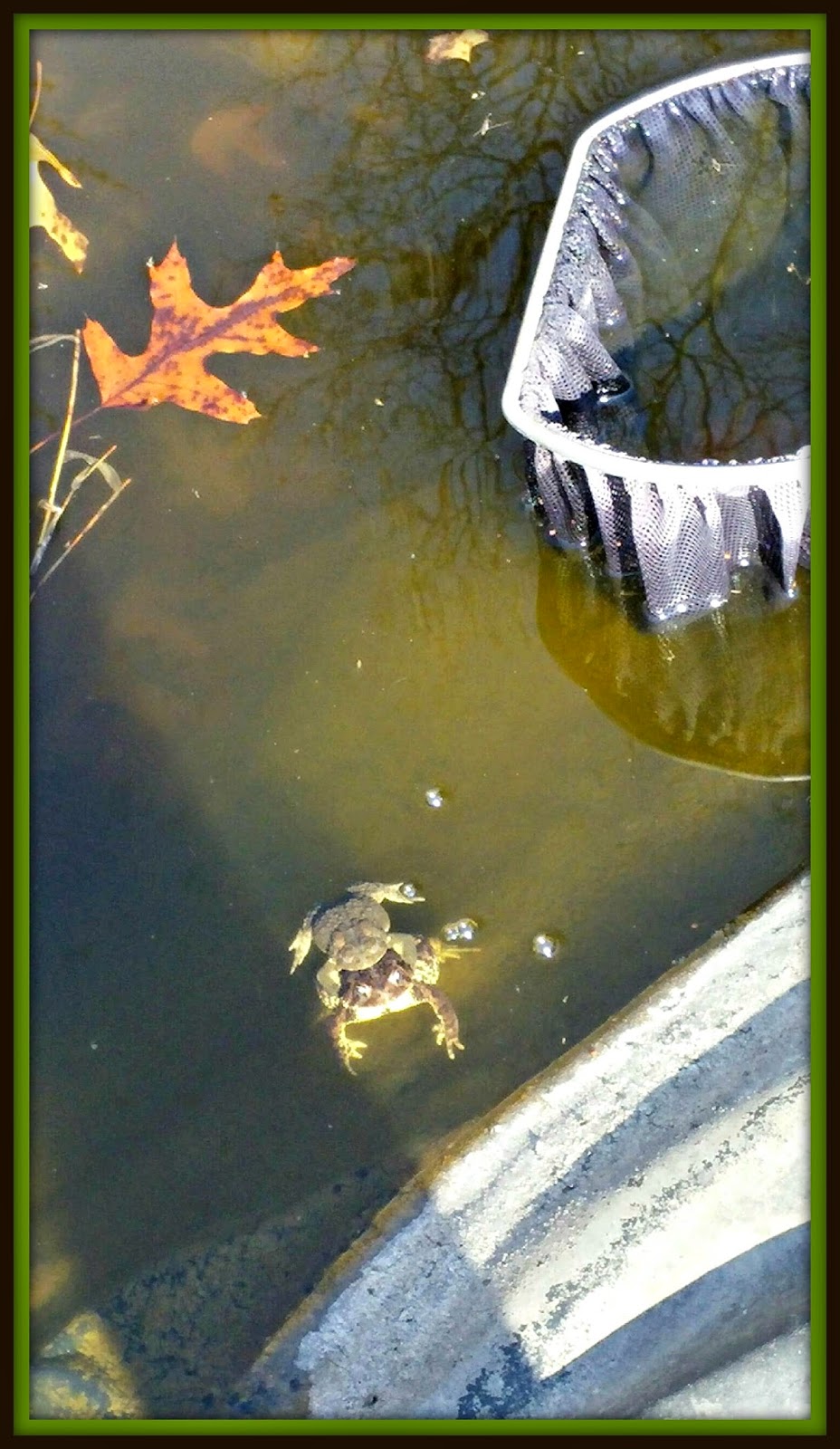 We started hearing the frogs singing in the pond pretty early this year.  They are pretty noisy and sing in the day and in the night..ALL NIGHT...and LOUDLY.  Terry was determined to get some pics.  He spotted 4 large and 4 small frogs...all in this position.  After a few minutes it became apparent that we are going to have A LOT of tadpoles, lol.  There is a large fish community that I suspect will eat a lot of the tinies, but as those frogs get bigger we'll be catching them and carting them down to the river.  It's very upsetting to watch a frog lay in wait for a Koi to swim by and become the frog's supper.  Turn around is fair play, I guess, but frogs are free and Koi are not! It has been pretty interesting watching the frogs.  When they sing, the skin under their lower jaw puffs out like a balloon then you hear them sing. If you have been a long time reader here, you know that I LOVE frogs.  Absolutely! 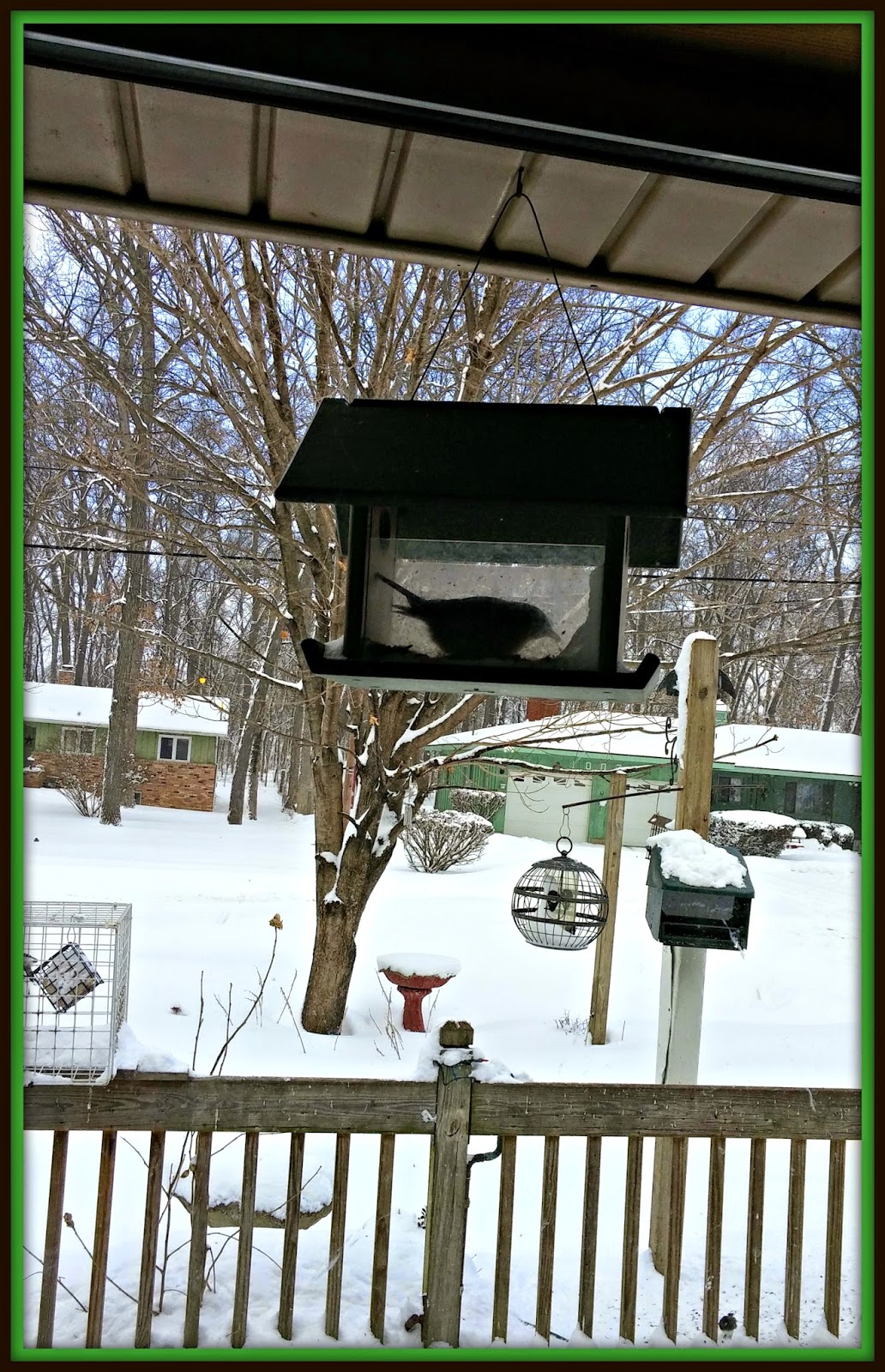 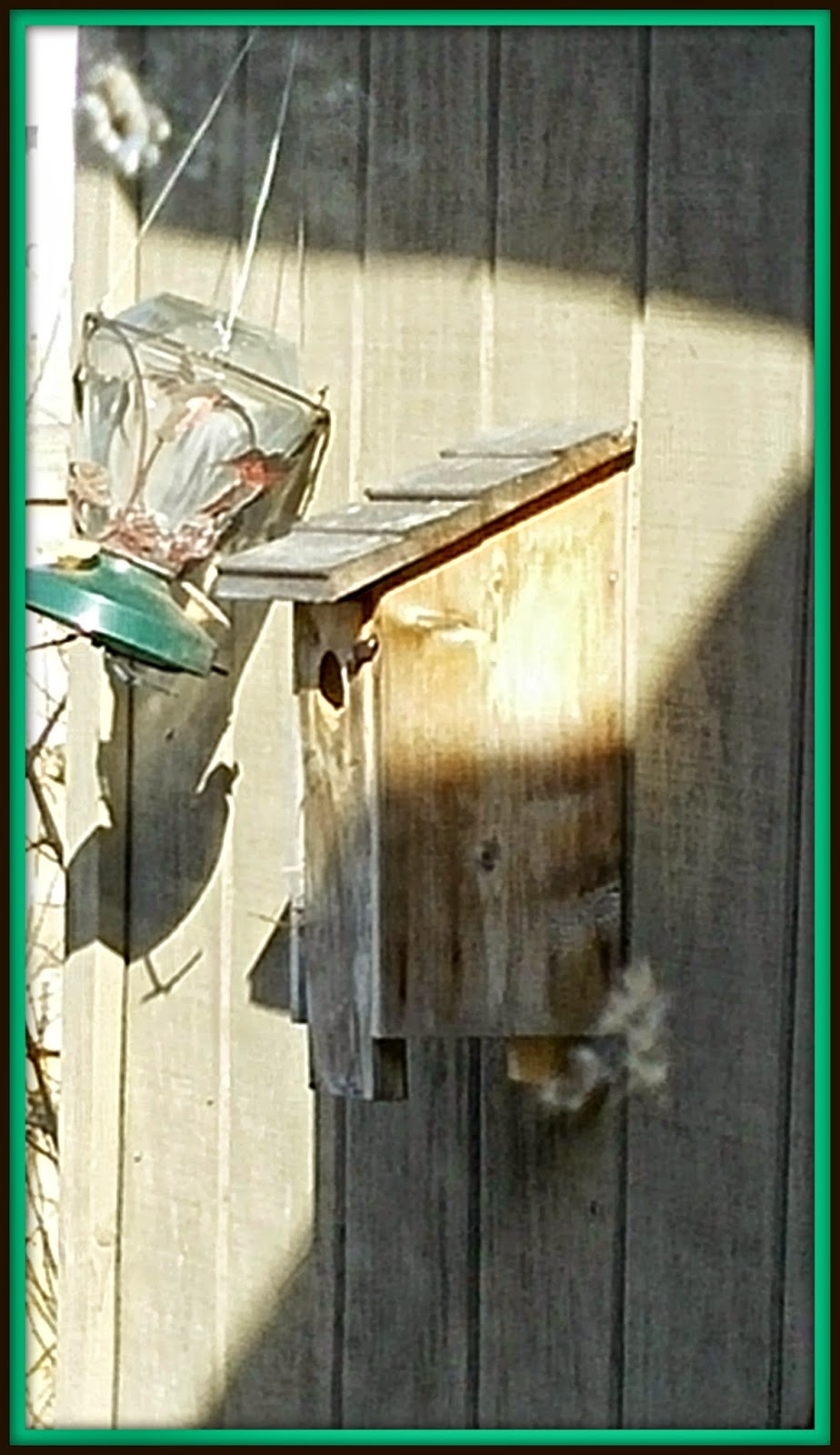 The blue birds have been here all winter.  I have a meal worm feeder hanging from the overhang in front of the patio window in the living room.  Even when there was a lot of snow, it was easy to open the door and add the worms.  We have several feeders in the front with a variety of seeds and suet and keep it all supplied all winter.

We make an effort to attract the blue birds and have been lucky to have a couple of broods each spring.  It goes beyond feeding and supplying appropriate housing.  You must be willing protect them as best you can from the Evil English Sparrows that fight over housing and have been known to steal Blue Bird eggs from the nest and drop them on the ground.  They will also kill Blue Birds if  they can.


This is one of several houses that we have for the Blue Birds to choose.  It is usually the house of choice and has made a nesting place for a Blue Bird couple for at least 7 years.  This year we thought we had a couple.  However, when they were making their nest, sparrows took over and made THEIR nest right on top of the Blue Bird nest. 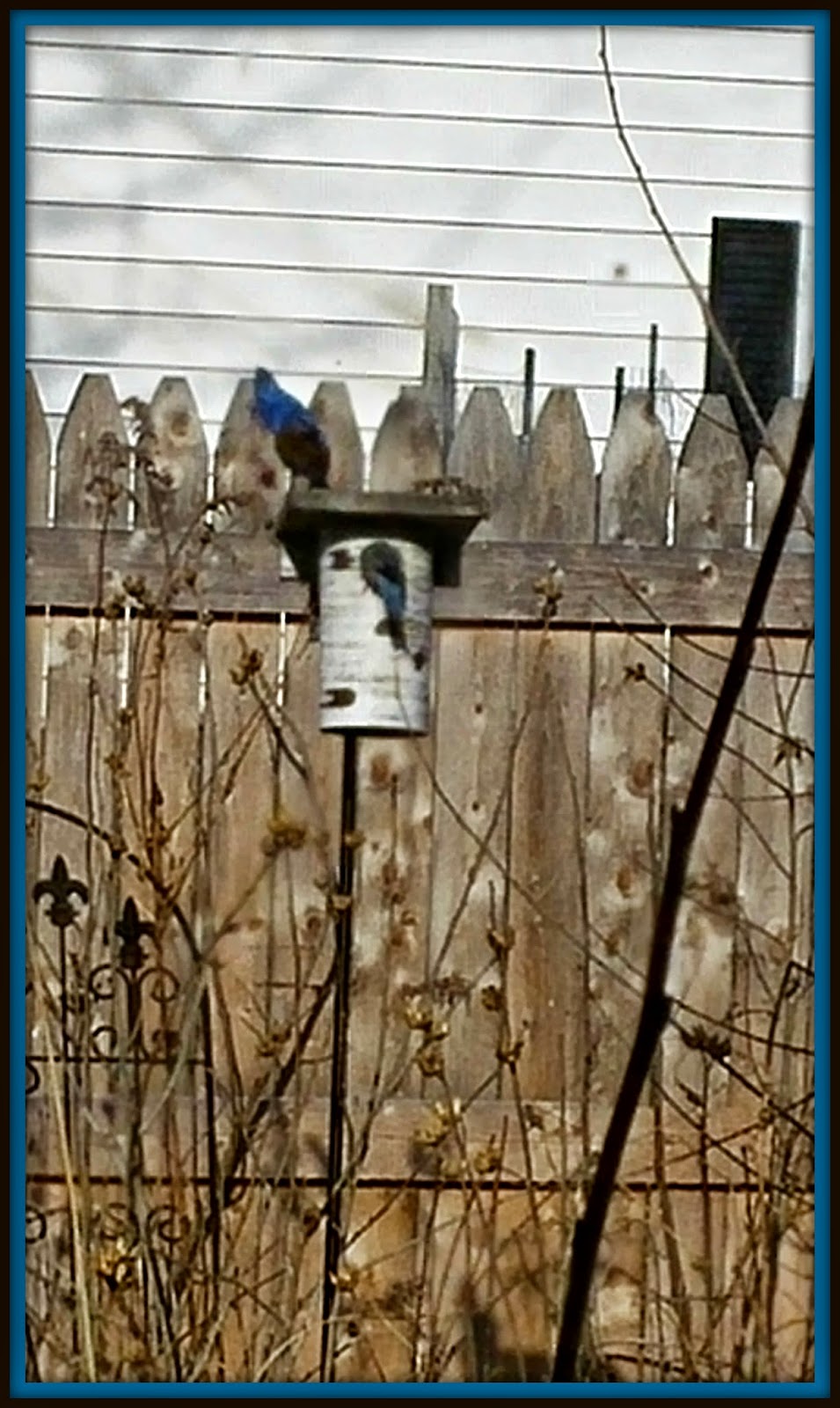 Our blues decided to move to another house.  We thought be had a match.  But no luck.  So far, it's not happening.

I'm not too upset though because these houses are near the pond and we have a lot of work to do out there this year.  We usually defer to the Blue Birds until their family leaves the nest.  Since they have as many as 3 per year, it can deter us from working in the area until well into Spring.

BUT!!!  I read an article that mentioned that Blues will nest in natural cavities in trees.  Since I have seen them flying in the back yard, and not just bathing and drinking at the pond, I decided to investigate.  Sure enough, I think we have a nest in the old Maple tree in the back yard.  They we constructing a nest, so hopefully we'll have more babies.  Even if we don't, I'm happy to supply their food.

I'll be putting out the Oriole feeders pretty soon.  They feed until their babies are hatched, then we see them but not at the feeders.   We have a large variety of birds.  The pond is a huge draw for them and we spend a lot of time watching them.

And just a note here...please do what you can to save our earth.  Re-purpose when possible.  Send whatever you can to be recycled to keep it out of the landfill. Don't burn if you can avoid it.  Find a joy in nature.

Have A Latte Blog Hop

Madame Samm is hosting  a Blog Hop and it's all about COFFEE!

Everyone that knows me knows that I live on coffee. My favorite is Maxwell House French Vanilla. I drink what the docs would say is too much...there is a pot going from the time I wake up until I go to bed.  It never keeps me awake.

COFFEE IS MY FRIEND! 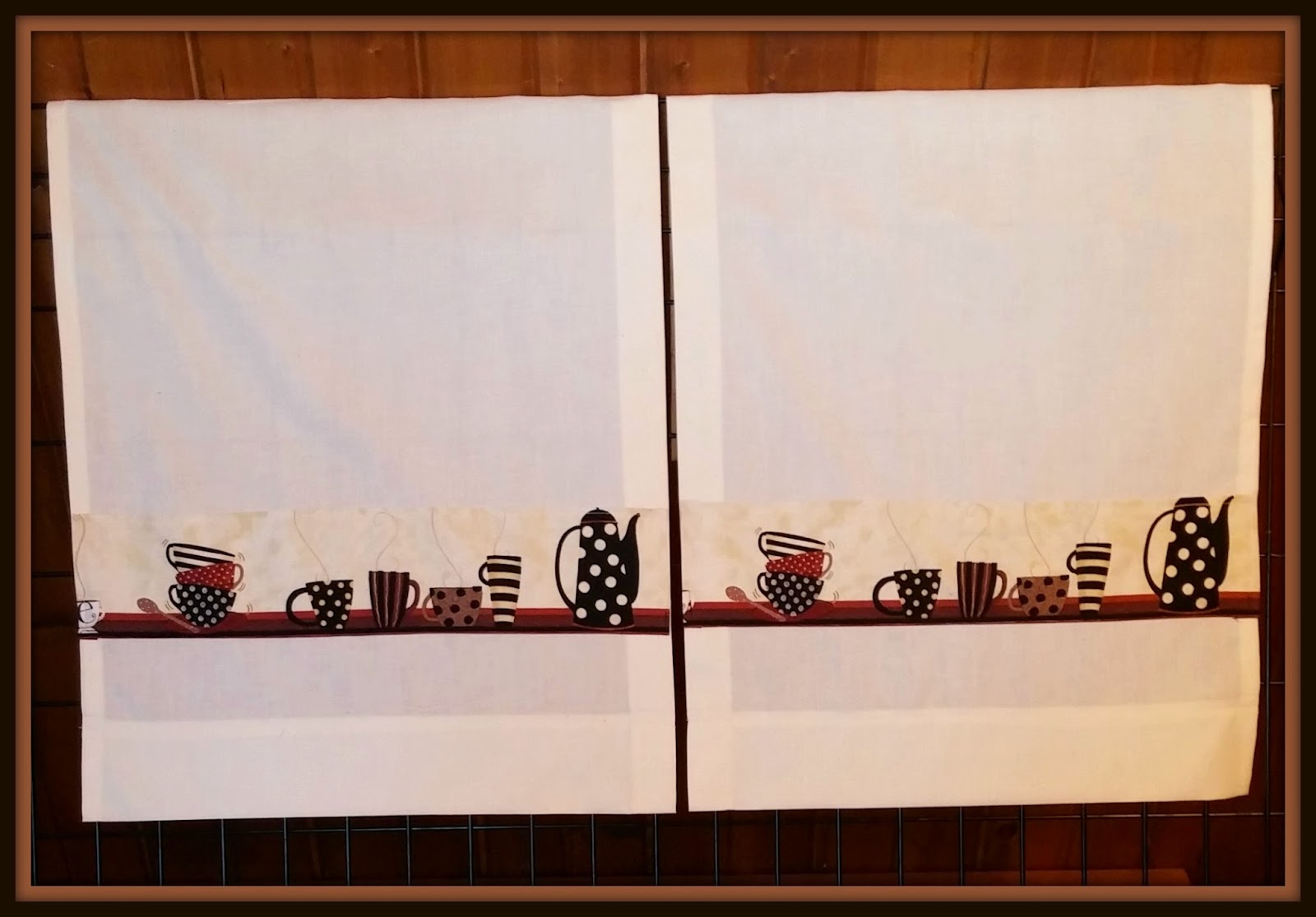 When Terry decided to semi remodel our kitchen, I knew that my new decor theme would be coffee.

These are the curtains I made, however I am unable to hang them yet because the ceramic tile around the window they were made for has not had the finishing touches yet. 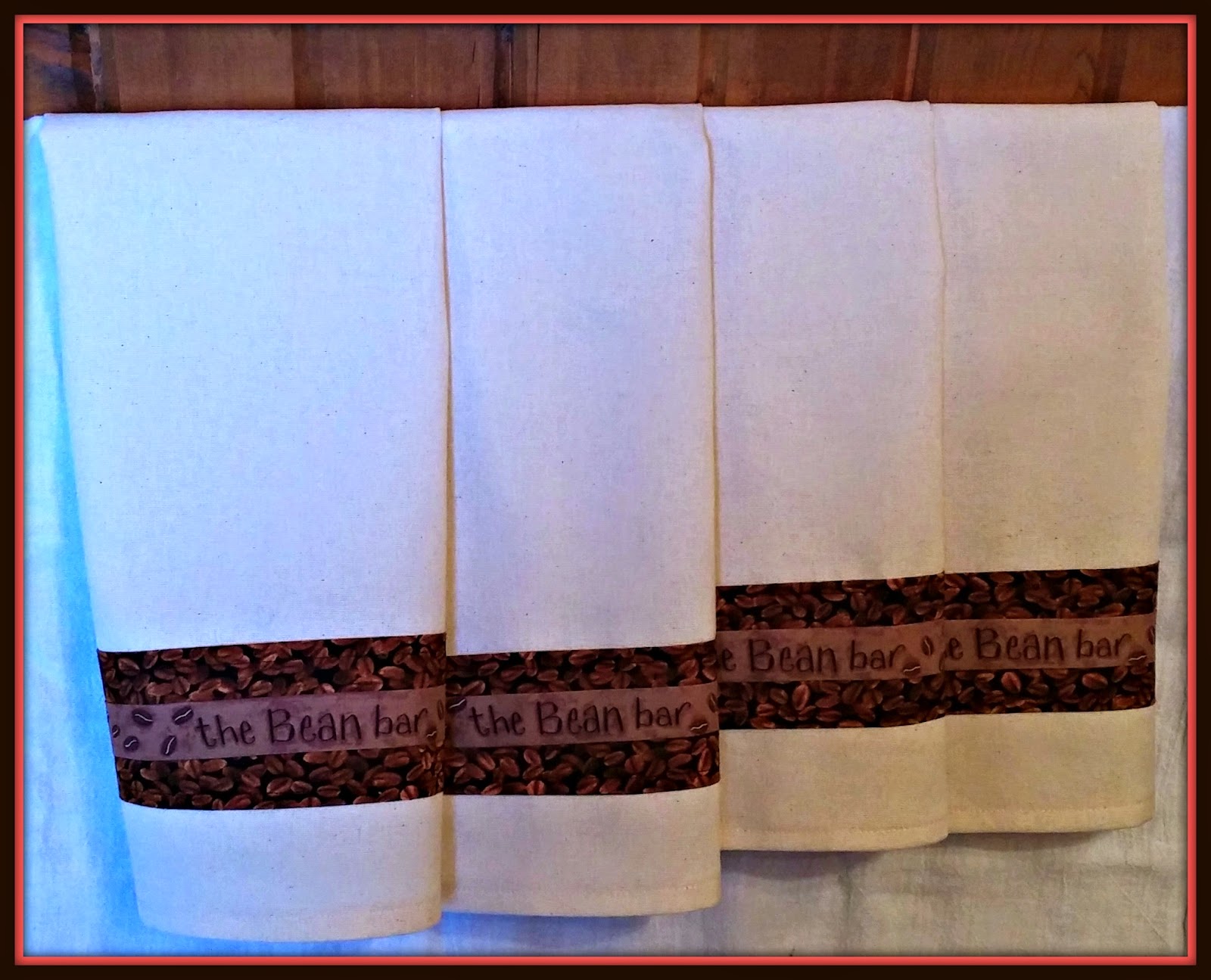 I have been collecting coffee material for quite a while.  I had the perfect coffee bean fabric to enhance this Have a Latte fabric.  This is the first time I actually made dish towels and I'm sure I'll be making a lot more!  They were a fun project. 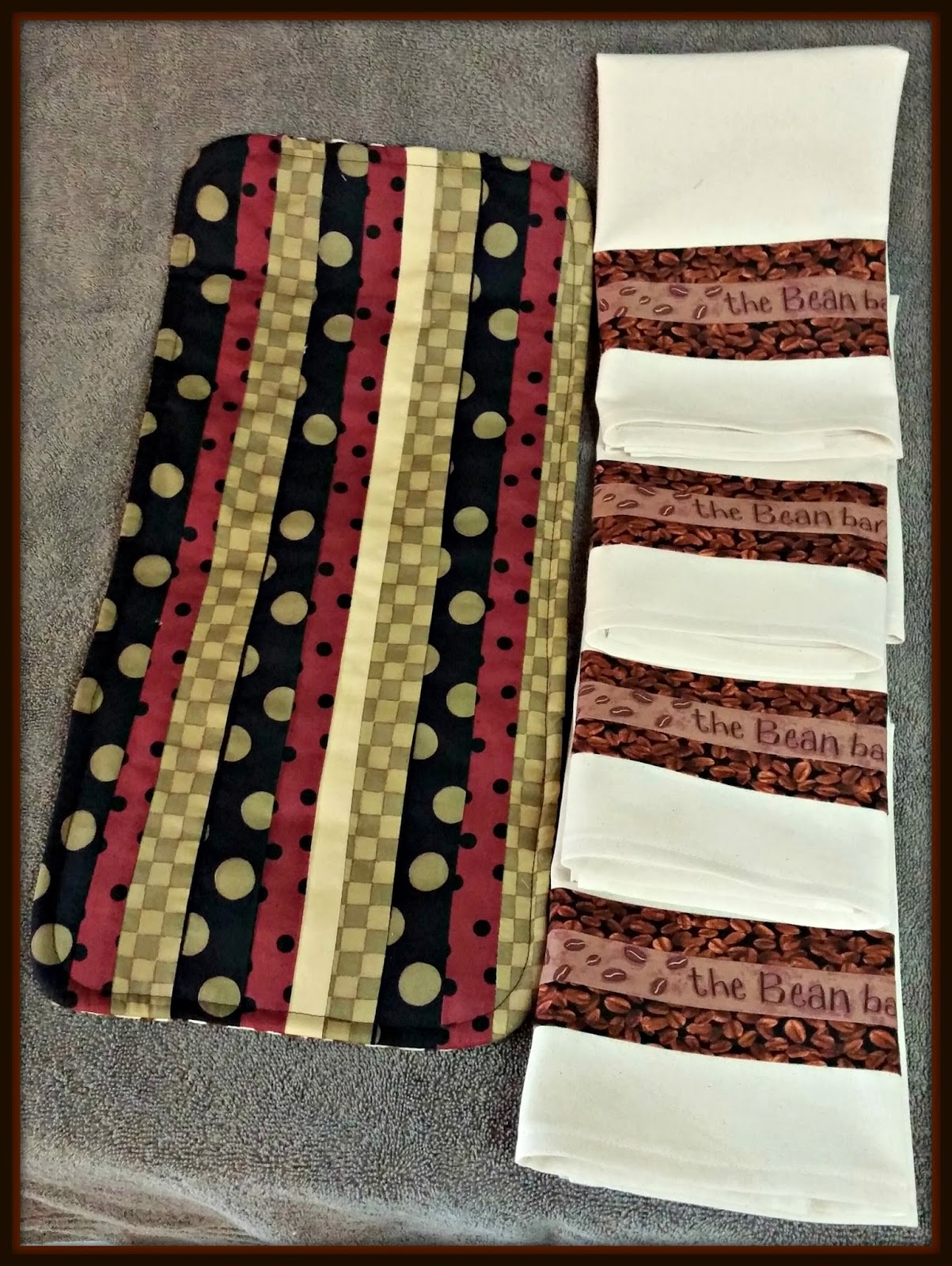 Here they are again partnered with a casserole hot pad made from the Have A Latte fabric.

I bake and roast a lot when I cook and made this hot pad to the size of my favorite casserole dish...9 x 13.

I have a table cover in the works that I am not showing here because it's not done.  We will be replacing our booth with a table and chairs.  Since I don't know the size and shape of the table, I'll finish the table cover when we decide on a table set.

I'll be making small appliance covers when I decide which ones I'll leave on the new counter!


Jump on the hop and visit other blogs that are participating today and don't forget to visit everyone else while the hop is on.

STITCHING BY THE LAKE

And another thing about me is that I LOVE Maxine!  We both definitely love our COFFEE. 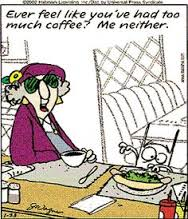 Happy Hopping!!
A Big Thank You To Joan and Madame Samm!!

Labels: Have A Latte Blog Hop

I Have Another Friend! 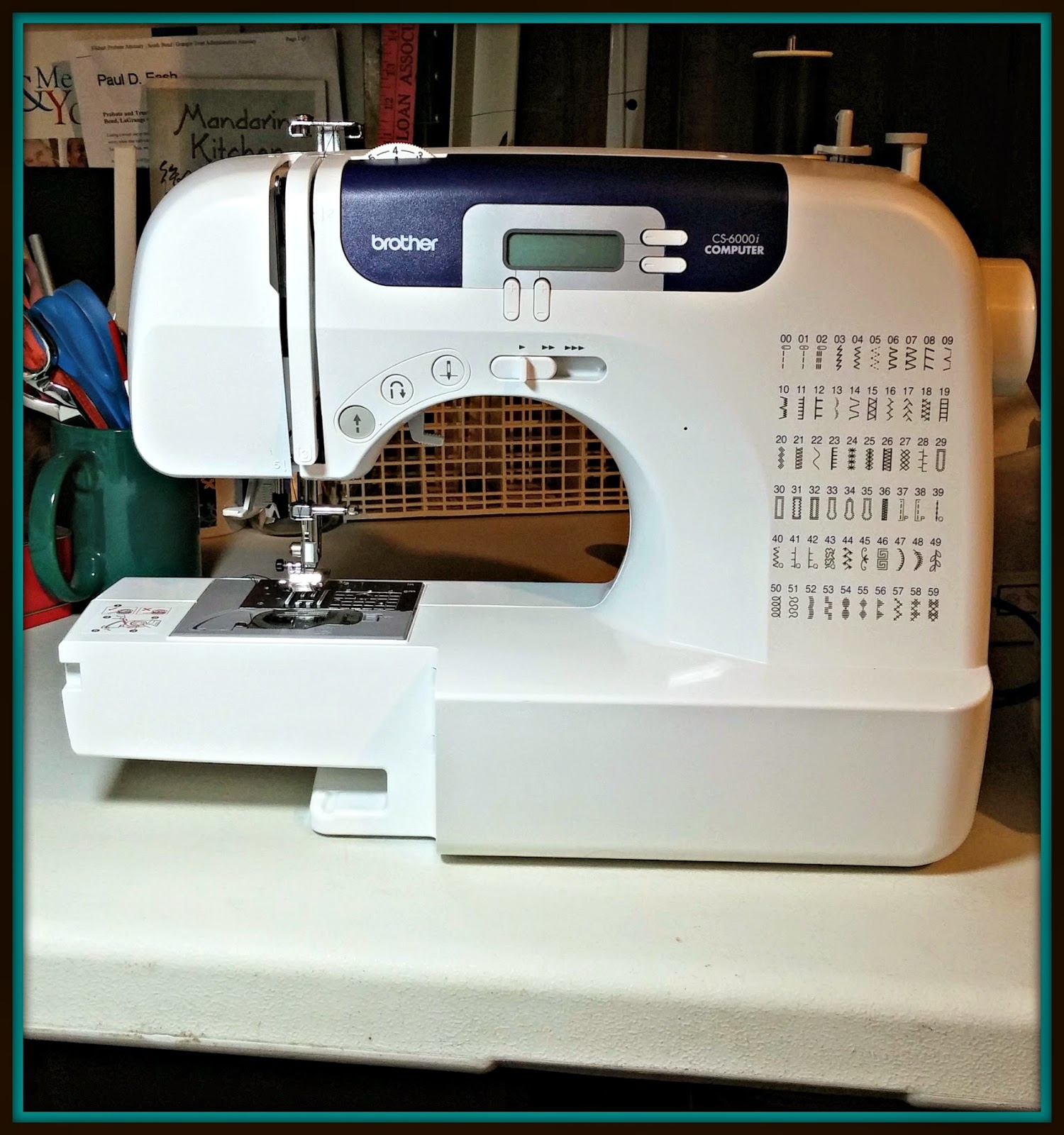 This is my new friend.  I have Viking that I absolutely love.  But since I have begun sewing steadily again, I decided that I wanted needed a second sewing machine. My current sewing project and the next few that I have planned will have me bouncing between a couple of different thread colors.  I really NEEDED a second machine to avoid switching thread color all the time, don't you think!?!

I didn't really look around much because I wanted a very inexpensive machine.  I had a brother in the past and it was OK.

This little machine is digital and easy to use AND inexpensive.  The stitches are uniform, which is an important quality.

I'd be interested to know how many of my sewing friends have two machines.
Posted by Carol- Beads and Birds at 1:26 PM 10 comments 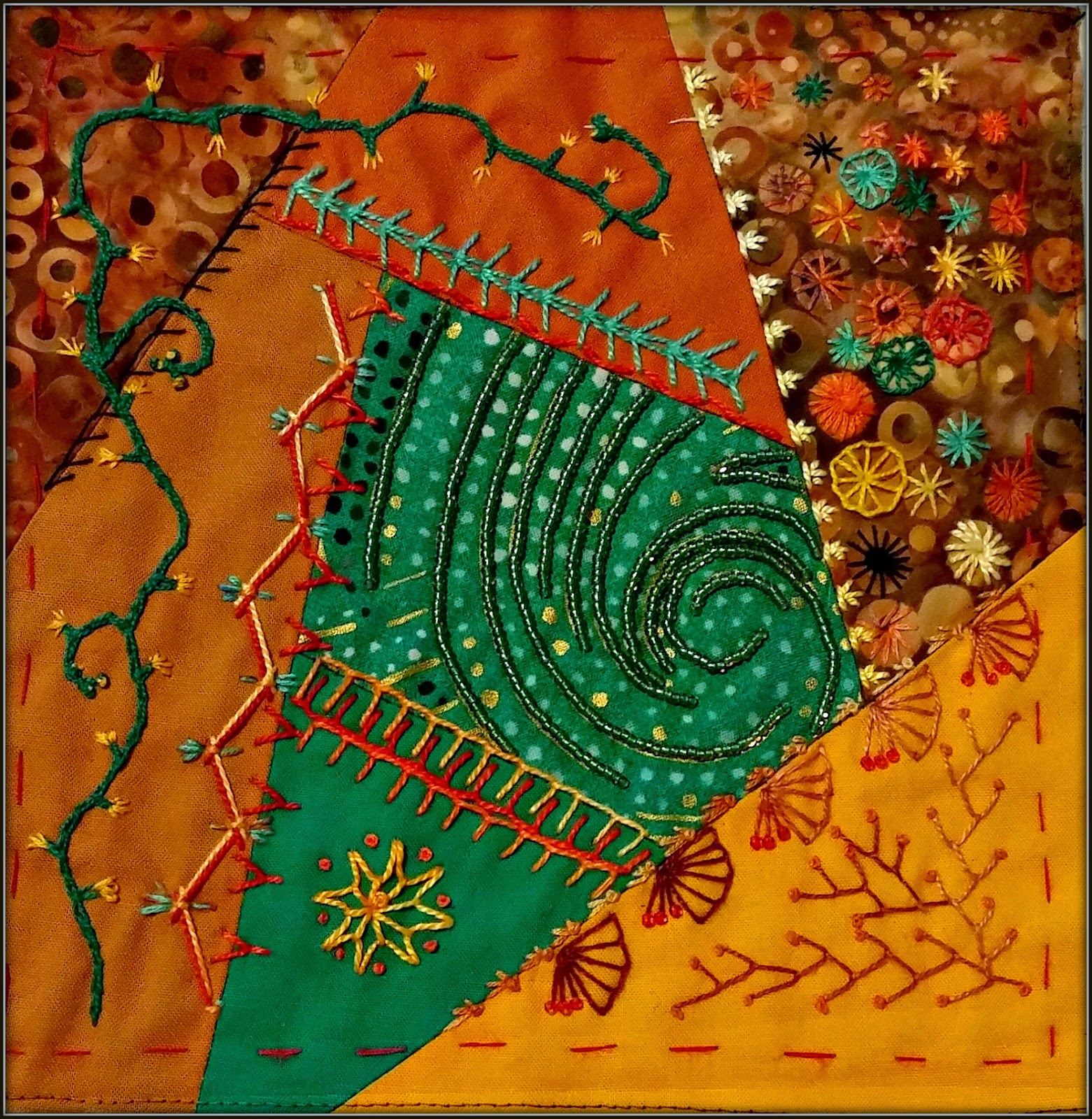 There's a lot to learn in CQ.  Even when you take a class..even a wonderful one like Kathy Shaw's, you still have to put what you lean into practice.

There are some techniques she taught that I didn't remember until I got into trouble.  I tore some stitches out, but mostly I left the errors I made in seam choices.  This entire project is a learning process for me.

I really like the colors in this project...remember it goes with my Princess on a Pea panel.

I'll start the next block this weekend.  It might be one of my favorite pieced blocks.  It has tiger print!
Posted by Carol- Beads and Birds at 9:35 AM 11 comments