What If She's An Angel 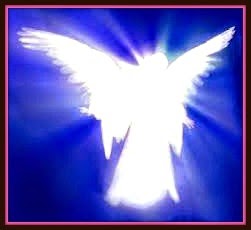 Today Deb's post really got me thinking about something I've been thinking about. It really is worth taking a moment to click the link and read a heartfelt story.

Now, let me tell you a story that kind of gives me goose bumps.

Did you ever hear the country song "What If She's An Angel"? I don't listen to Country Music, but this song always provokes a thought and one came home to me this week.  I don't write much here about my daughter.  In a lot of ways we have different views on life, but in some ways we are the same and in some ways she is better than I am.

Laurie does not know how to make a long story short...ever.  So sometimes when she starts one, you want to roll your eyes and make that circle in the air with your index finger..you know the one that means speed it up. She gives you EVERY little detail.  When she called the other night just when I was fixing supper, that's kind of how I felt.  She works in an RV factory and has for about 15 years.  There is a LOT of drama amoung the women in that environment.  Lots of catty women.  The story started off about one of the new women and the trouble she was having with some of the others.  You know how some women can attack the weakest.  The rumors were that this woman had been in a bad marriage...left with only what she could carry and got nothing in the divorce.  She was living in a local low cost motel and walked to work until she could save to buy a clunker to drive. My daughter struck up a friendship with her, but never asked details of her story.  Laurie lives in a very nice apartment complex.  Her apartment is well decorated and maintained.  She has had her own struggles being a single mother.  Since Corey moved back into our home, that left an extra bedroom in her apartment.  She offered the young woman  to stay with Laurie until she could get on her feet and save more money.  At this point in the story, my fear of the unknown rose up but I didn't voice my thoughts.  This impulsive action is one way that Laurie and I differ.  I must think things out and rarely jump right in.  Anyway, Laurie continued with her story.  When the woman entered Laurie's apartment and saw her family pictures on the wall, she told Laurie that she had thought Laurie looked familiar and asked if she is a DeLater.  That is Laurie's maiden name of course. Well, the hook in the story is that the woman is my brother-in-law's ex daughter-in-law.  We haven't seen her since she divorced his step son more than 20 years ago ( her first marriage).

There is a little more to the story..nothing like drugs, or drinking etc...and I don't know how it will end.  But for right now I'm wondering which one is the angel.
Posted by Carol- Beads and Birds at 11:24 AM

Labels: Angels Amoung Us

I believe everyone that comes into our lives makes us better, in one way or another, be it positive or negative.
either way we learn something for having dealt with them.
when the influence is negative we learn not to do that again and when the experience is positive we take that with us. I hope this is a good thing for your daughter.
my mom has had a 1x2 typewritten saying taped by the doorway, for 40 years, it's small and yellowed with age now.
" all my friends give me pleasure, some when the walk in mt door , some when they walk out"

Incredible, Carol! Of course, no matter how it all ends, a reconnection has been made that I hope you can feel was meant to be.

Sometimes the world is just a tad too small.....:)

Sometimes the world seems so small and we re-connect with people that we never expected to see again. I'm a believer that things happen for a reason and that it's a power much greater than us that puts the wheels in motion. Good luck to your daughter and her friend.

I do believe the old cliche that people come into our lives...and we into theirs....for a reason. Your daughter is a good woman...it's not anyone that would open their homes to someone whom they're only getting to know.

I had to laugh when I read your description of your daughter's long stories...I have a similar daughter. It is so difficult as a mom to hear our children tell us stories of things going on in their life without injecting our own thoughts and feelings. Your daughter only listened to her heart when she invited this woman into her home. Wow, that was not an easy thing for her to do...opening her home to someone she really did not know. Then when we read that this woman is somewhat "related", you have to wonder. It does give me goosebumps to think of how they were brought together and it all started with your daughter listening to her heart. Beautiful!
On a side note Kathy S is offering her CQ class again so I signed up. You had so much fun with the class I did not want to miss out.
xo,
Deb
Thanks for the shout out in your post!

Interesting story, I wonder what the rest of it turns out to be, who is the angel? Maybe both women will be helping each other? That would be a good ending. Sometimes it is a small world.

What a wonderful story! The world is small if we let it be - we can all relate to each other if we try - opening your heart and your home can carry some risks but so can getting in your car and driving each day. This was such a good story and obviously your daughter is a very good and open person.

That's beautiful, Carol. I hope the angels will assure a happy ending for all. I believe in angels. Cue Abba.

As for the long inch-by-painful-inch storytelling, I do that! I have to restrain myself and try to "cut to the chase." I'm 68 and still working on it. Sooo ...