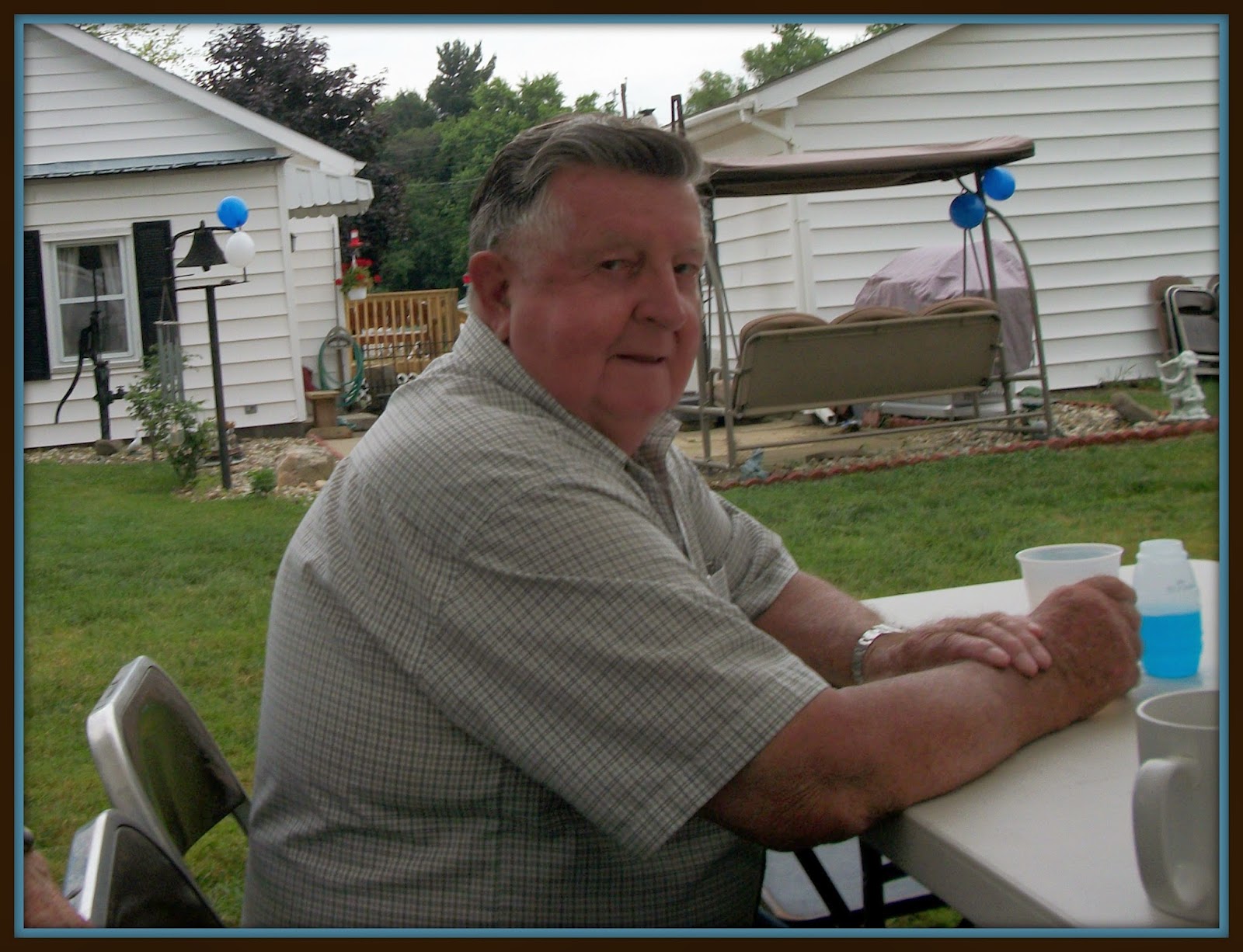 This is a picture of my father-in-law taken a couple of summers ago. He is 89.  His name is Henry. Some call him Hank.  At my house we all him Biggy Papa,  a title long ago given to the oldest living grandfather in Terry's family.  I am extremely fond of this man and I love him very much. Thoughts of my reflecting start with him today.

My blog friend Penny posted today about another thing she is grateful for.  That made me realize how much I have been thinking about being grateful.

Sometimes I slip off the blog wagon.  My recent absence has been due to my encounter with a ruthless allergy season.  It started with Terry because on May 22 we discovered that his had developed into pneumonia.  By the time we went back to our doctor for Terry's follow-up a week later, I was in the throws of a horrible respiratory infection that just would not respond to medicine. We were both  pretty sick for weeks.  Terry never had any trouble sleeping but the meds I was on caused me to remain awake most of the nights that I was fighting it, though I did catch up during the day.  Many times I found myself looking at Terry in the middle of the night thinking how much I love him and how worried I was about HIS health. Terry retired in January,(but in truth his health has failed some and it became apparent that he would no be able to continue to work).

This illness zapped his strength, and mine pretty badly and it was kind of scary.  We were starting to wonder if we would EVER have any energy. Then just when we were STARTing to recover our home started to feel IT'S aches and pains.. sewer problems from roots from the old trees next door, a pipe leak under the bathroom floor and then one in the laundry room.  Corey learned a lot about plumbing in the last few weeks under Terry's guidance.

Then the left punch landed.  They found a spot on my father-in-laws lung that tested positive for cancer.
Thyroid cancer. Prostate cancer and now lung cancer. All at the same time.  He only has one half of one lung able to function and uses oxygen all the time.  At first the doctors thought they would use some new technique to zap the lung cancer, but that was postponed.  A group of doctors will discuss treatment and tell him next week.

So, as you might guess, today I am reflecting on so many things I am grateful for.

Gratitude is like a web. One thought just attaches to another. Grateful to be married to Terry--that Terry is getting well--that we have a wonderful and knowledgeable doctor--that Corey lives with us and is able and willing to help when needed--and on and on and on.

Make your things to be grateful for like a web....or like the 5 degrees to Kevin Bacon thing...but think about them often and soon your thoughts will be spiraling one thing to the next.

Be well, be happy and please leave a comment today.  I'm feeling a bit disconnected because I have been reading all your posts when I could but fell short a little in the communication department.
xx,

I'm so glad to hear that both you and Terry are getting better and so sad to hear about your Father-in-law's illness. Sometimes its downright hard to be thankful but I always know that someone (probably many someone's) has it much worse than I do and that I always have something to be thankful for - even it is something general like the sun shining or a flower blooming. I'll be thinking about you and your family - sending you all strength.

I'm so sorry all of this seems to be happening. I will keep all of you in my prayers. We ( Husband and I ) didn't get sick this year but last year we had that terrible flu for WEEKS and wondered the same. Thank you for reminding us to remember there is always something to be grateful for. Hugs

My goodness Carol you have been dealt a left hook and right uppercut... I hope everything takes a turn for the better.... I do count my blessings each and every day. Never take for granted the moments when things are good because it can turn on a dime....
Please you and Terry continue to get better and i will keep your father in law in my thoughts and give Corey a great big (((hug)))
Hugs! deb

I didn't realize that you have been ill, I'm so sorry to hear it. I know 3 or 4 other people who have also had something like this, a bug that just won't go away for weeks and sometimes turns into pneumonia. Hope you all have finally turned the corner and are mending. Don't over do it! Also so sorry to hear about your FIL. Just seems like if you live to be that age, you ought to be immune to such things. Sounds like he has had a great run of life so far.

Dear Carol I am so sorry for all that the universe is throwing at you right now. I am impressed with your grateful heart and that you are being strong, if it is just on the outside. Please take care of yourself, know that me and so many others care about you and will be sending up prayers on the smoke for you and your family.
(Prayers on the smoke is from my sacred pipe.)
Hugs
Nicole/Beadwright

It would do us all good I think to spend some time reflecting on the blessings we have that we don't take notice off in our busy lives. Instead of wanting more, we need to take time to count our blessings. Thank you for the reminder.

My goodness, "young" lady! You have had your share lately haven't you!!! I'm sure everything will turn out but as they say it's out of our hands! What will be will be....the 'big guy' up above knows what should happen and why...hard to understand sometime...but you'll be in my thoughts. Feel better and my thoughts for you FIL!!

Hello Carol. I am glad you and your DH is recovering from being ill and I hope you all are 100 percent soon. Your FIL looks like a very sweet and kind man. My heart and prayers goes out to your FIL and his family members as you support him during this difficulty times.hugs Judy

Carol, somehow I lost touch. Was motivated to check in here by your comment on Penny's post. I am so sorry about life's curve balls, so hard when so much hits at once. Be well, you are one of my first blogging connections. My Terry's parents have been gone for decades, but my own Father passed at 96 last December. Your father in law has many hurdles ahead, but at 90 I'm sure he is also counting his blessings with gratefulness for a long, full life. Chin up up for him, he needs your strength and gratefulness. I always love your little x and o...now sending them back to you!
Barb

Dear Carol. I am so sorry for the health problems you and yours are having, but grateful that you and your husband are on the mend. Sorry to hear about your FIL. I send him best wishes and healing prayers. Carol, when we get hit with problems, it seems to happen all at once and it's a heavy burden to carry. I wish you the best and send you prayers. You are a strong person and very wise. Remember that we all have to suffer in order to gain the peacefulness we all desire. ::hugs:: to you dear lady.
gloria-my thoughts are on you.

My dear Friend, you had mentioned this in our last emails a while back and I was wondering. Will keep you all close in thought and prayer. Corey is a blessing for you. Stay strong.

My dear Friend, you had mentioned this in our last emails a while back and I was wondering. Will keep you all close in thought and prayer. Corey is a blessing for you. Stay strong.

Oh Carol, I'm so sorry to hear what you all have been through. Glad that Terry and you have recovered your health. I love how you describe gratitude - sometimes it's like a web. That's lovely. Saying a prayer ffor your dear father-in-law. he sounds like avery special man.

Good wishes to you and your loved ones.