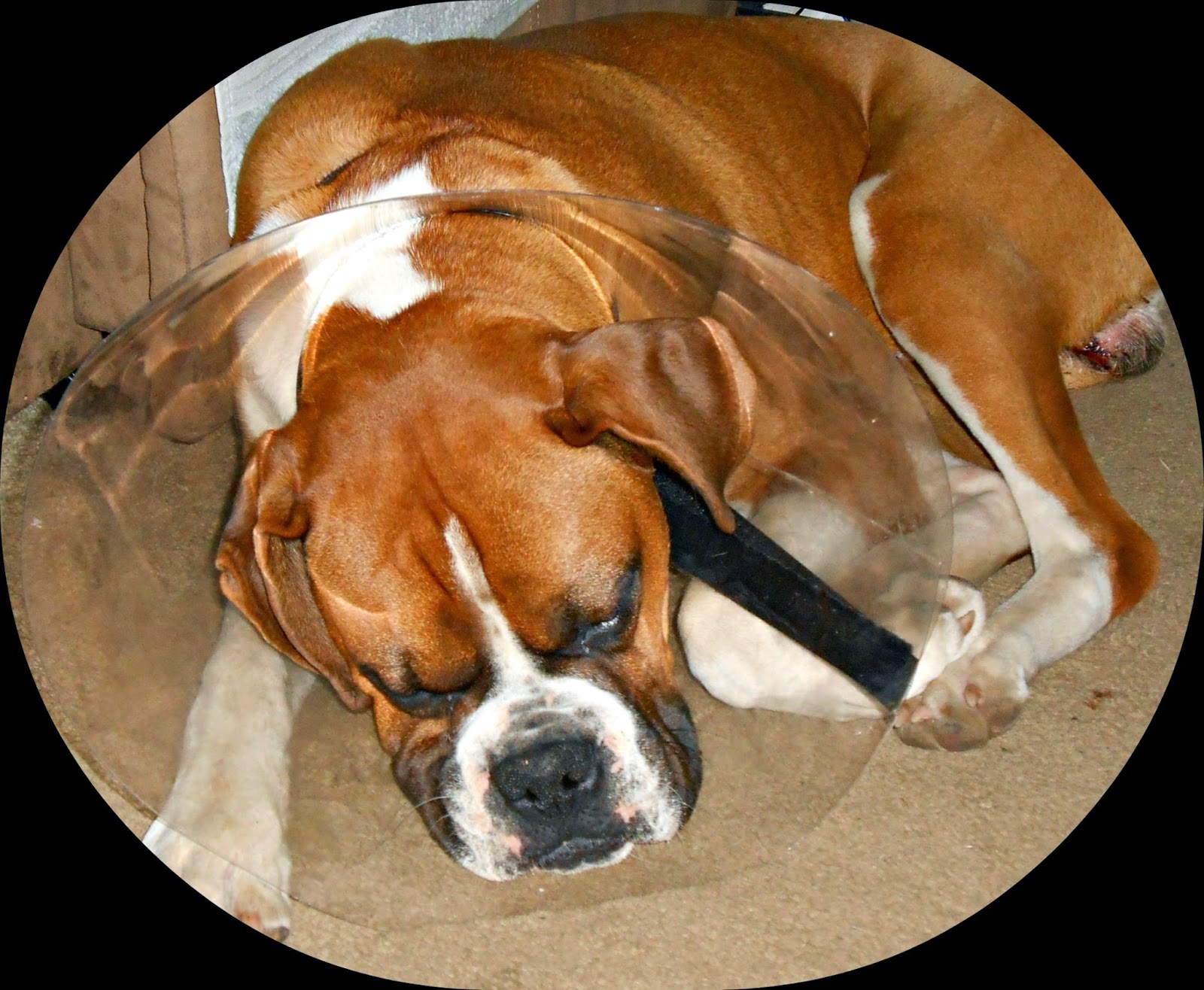 Tyson looks so sad, doesn't he. Thursday was quite a traumatic day for him . He had  Unilateral Cryptochid surgery when he was neutered.  Corey didn't want to have him neutered, but it was necessary because the condition can become cancerous later in the dog's life. It is also genetic and would be passed to his puppies. This is how it is described:

When one testicle on the dog fails to descend. Testicles should descend fully by the time the puppy is 2 months old. If the testicle is retained, it is usually non-functional and can become cancerous if it is not medically treated. The treatment that is suggested is to neuter your dog. When the neutering takes place, a small incision will be made to remove the undescended testicle(s); the normal testicle, if any, is removed in the regular manner.

Even though we watched him constantly, he would not leave the incision alone so we had to take him back to the vet to have a cone put on.  He was also given anti-biotics and a sedative if he needed it at home.

Bosco is SO mad at him.  Bosco wants to play, but I think he knows Tyson can't now that the cone is on.

I had to laugh (although please don't tell Tyson). Have you seen the latest ad on television where a woman is in the driver's seat of the car, her daughter and their dog are in the backseat. The women checks the GPS and brings up such and such neutering clinic. The daughter asks her mom what neutering means and the dog perks up his head and jumps out the car window. Its so funny!!

The cone of shame, although much needed, is such a pain. We have one of our girls going through a set of surgeries and sometimes I think it's harder on us than it is on her. Keeping her under "crate arrest" absolutely breaks my heart, but when they are not allowed to run or jump, the options are really limited. 8 weeks of this - twice!

Tyson is fortunate to be loved so much and I bet he'll be eager to show you real soon. That and to play with Bosco. :-)

Poor baby!! Reminds me of the commercial where the dog jumps out the car window when the little girl asks "what is neutering?"

Awwww - poor Tyson!! Please give him extra special scritches from me.

Poor baby!! Hope he's up and about soon.

Poor boy, but it was indeed the best thing to do for him.
xo,
Deb

Poor fella! Even when you know you are doing the right thing, it still can make you feel bad to see them so miserable! I remember when I had my goat neutered and it was at a country vets barn, he tossed the nuts on the floor and his dog ate them, in fact the dog was standing there anticipating the treat!
sorry, that's kinda gross, isn't it.

Ooch! Poor fella. Hope that cone comes off soon and he can get back to happy playtime with his best friend. Give him a kiss on the nose for me. xo