Win7 and A Puppy Update!

Before I retired, my work computer was updated from WinXP to Win8.  It took me a bit to get used to Win8 and luckily I didn't have to set it up.  At about that time, my home computer started acting up.  After getting the dreaded blue screen twice, I thought I better start researching a new desk top. (I didn't want a laptop).  I discovered that Microsoft is not doing so great in Win8 sales and there is something being developed to come out in 2015.  Most computer gurus were advising those in my situation to purchase Win7, which is what I did.  I can definitely see Microsoft's developing its way to Win8.  I'm pretty happy with what I bought.  There is a lot to know when making a choice to buy any electronics now.  You really have to do your homework from making a decision about phones, TVs, tables and computers.

I've spent some time personalizing the computer and getting to know Win7.  Also, I opted for Libre Office instead of spending $100 on Win Office Suite.  I hope I'll be happy with it, but I think so far, I will be.  I also signed up for health insurance on the Healthcare.gov web site.  I lost insurance when Terry quit work. I am pleased that I got comparable coverage AND I can keep my Doctor.

So, moving right along.  I promised an update on my mutts so here it is. 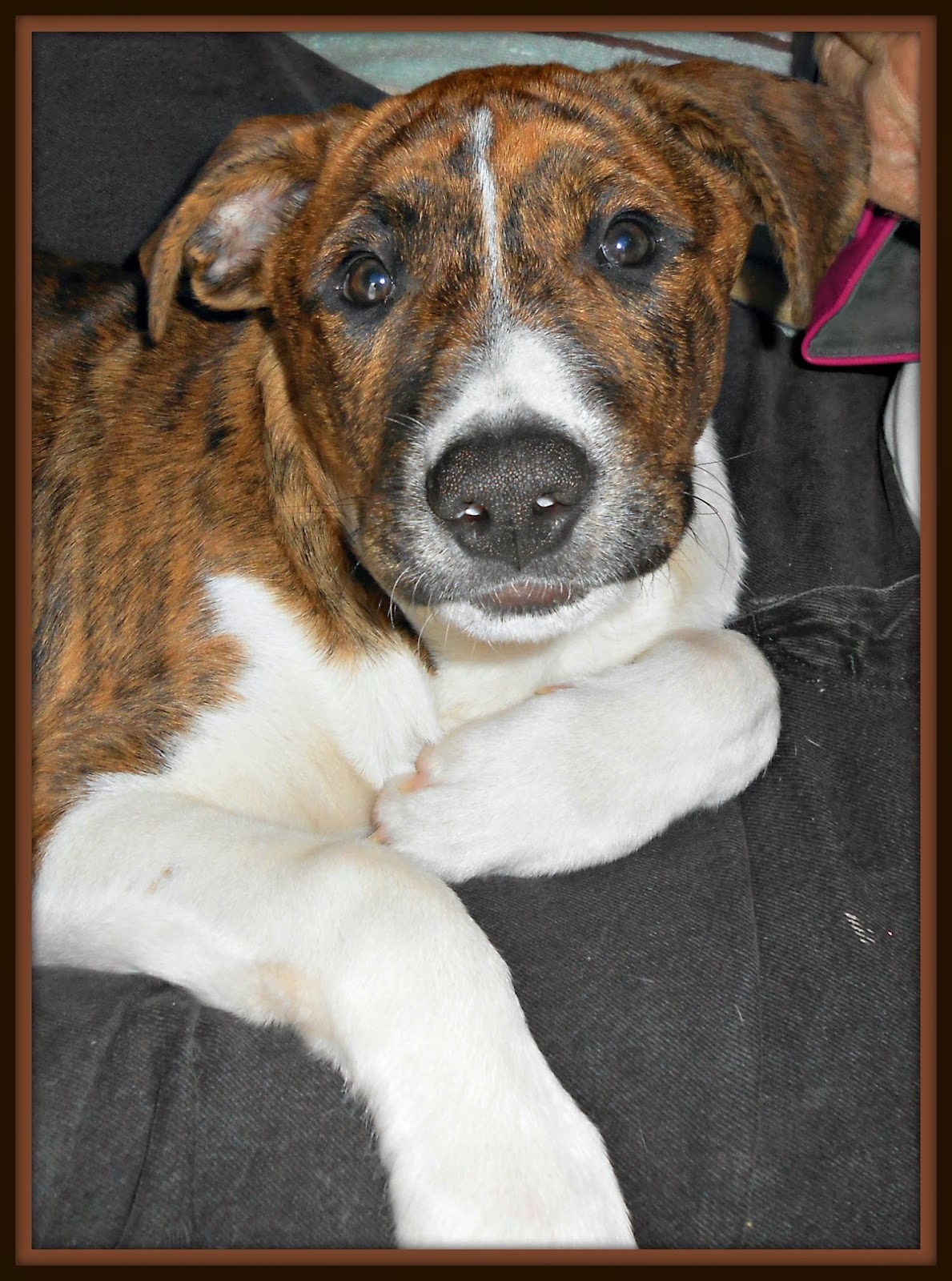 Look at this face!! Isn't he adorable!!
He is a great little? dog.  He gets along great with everyone.  I think he is Terry's dog.  Though he loves everyone, I'm pretty sure Terry is is pic.  No matter what he wants, he comes to me, but he sits on Terry's lap in the recliner, though I'm pretty sure that won't last too much longer.  He sleeps on Terry's side of the bed on the floor on a blanket.  BUT....GASP...Terry takes a nap sometimes and I find this guy laying beside him.  Sometimes Tyson is up there too.  I never would have thought that TERRY would allow a dog on his bed.

Bosco is almost 5 months old, weighs about 50 pounds. I measured him this morning. While laying on his side, he measures 36 inches from the tip of his nose to the end of his body not including his tail.  We definitely didn't think he would grow to be the estimated 100+ dog when full grown.  But its OK!

This is Bosco's crate which we call his House.
He doesn't sleep in it anymore, But we do put him in it when we leave the house.  On this particular day, he looked at me really weird when we left. I guess he was mad at us.  I wish you could have seen the look on Tyson's face when he saw it.  If a dog can have a stunned look, he did.  It was priceless. 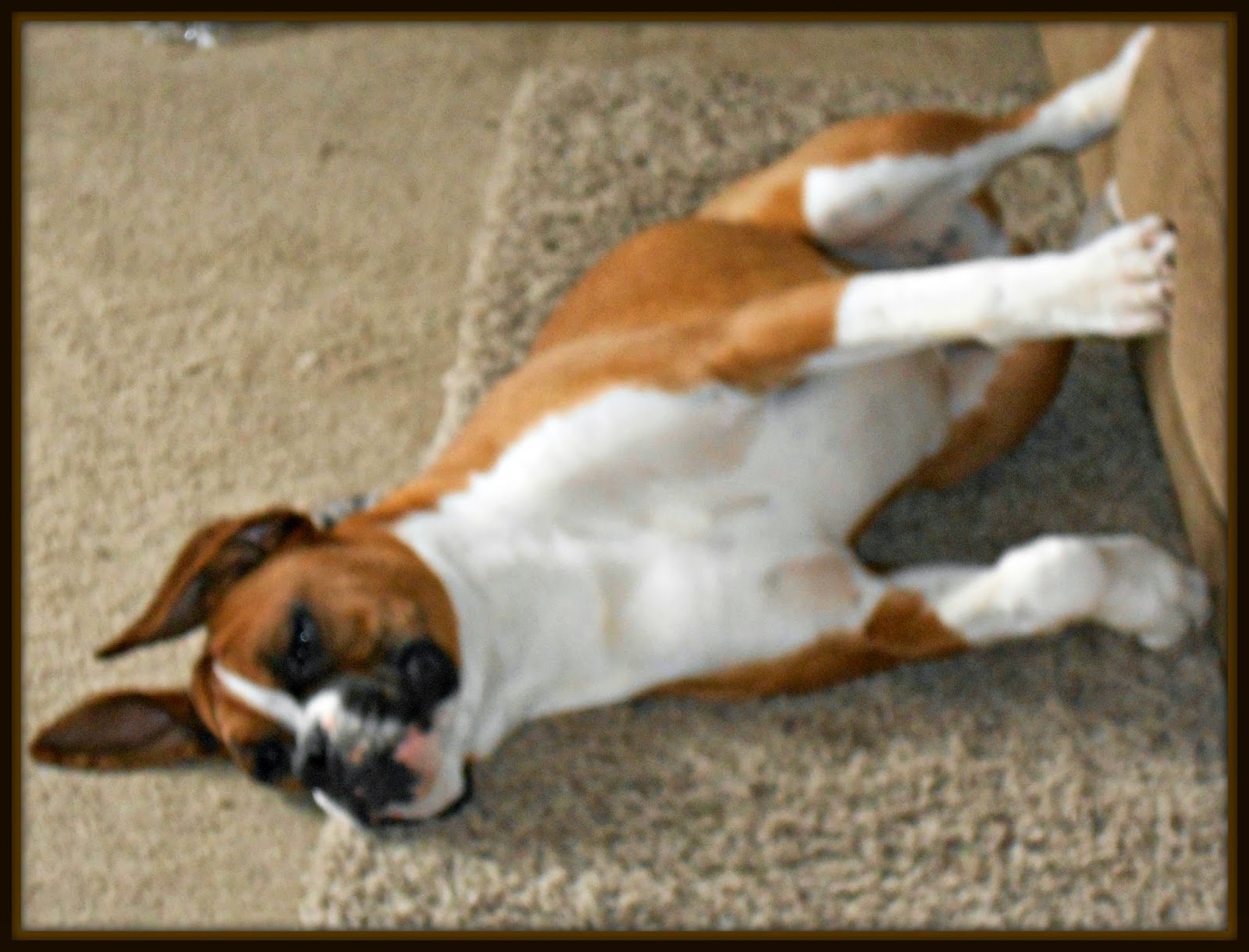 And, of course I have an update on Tyson too. No, this picture is not loaded wrong.  This is one way Tyson likes to sleep, with his legs braced on the couch. He is the biggest love puppy I have ever had besides Jack.  I tease Corey and tell him I am taking Tyson over, but he loves Corey so much I can only have Tyson's undivided attention when Corey is gone. 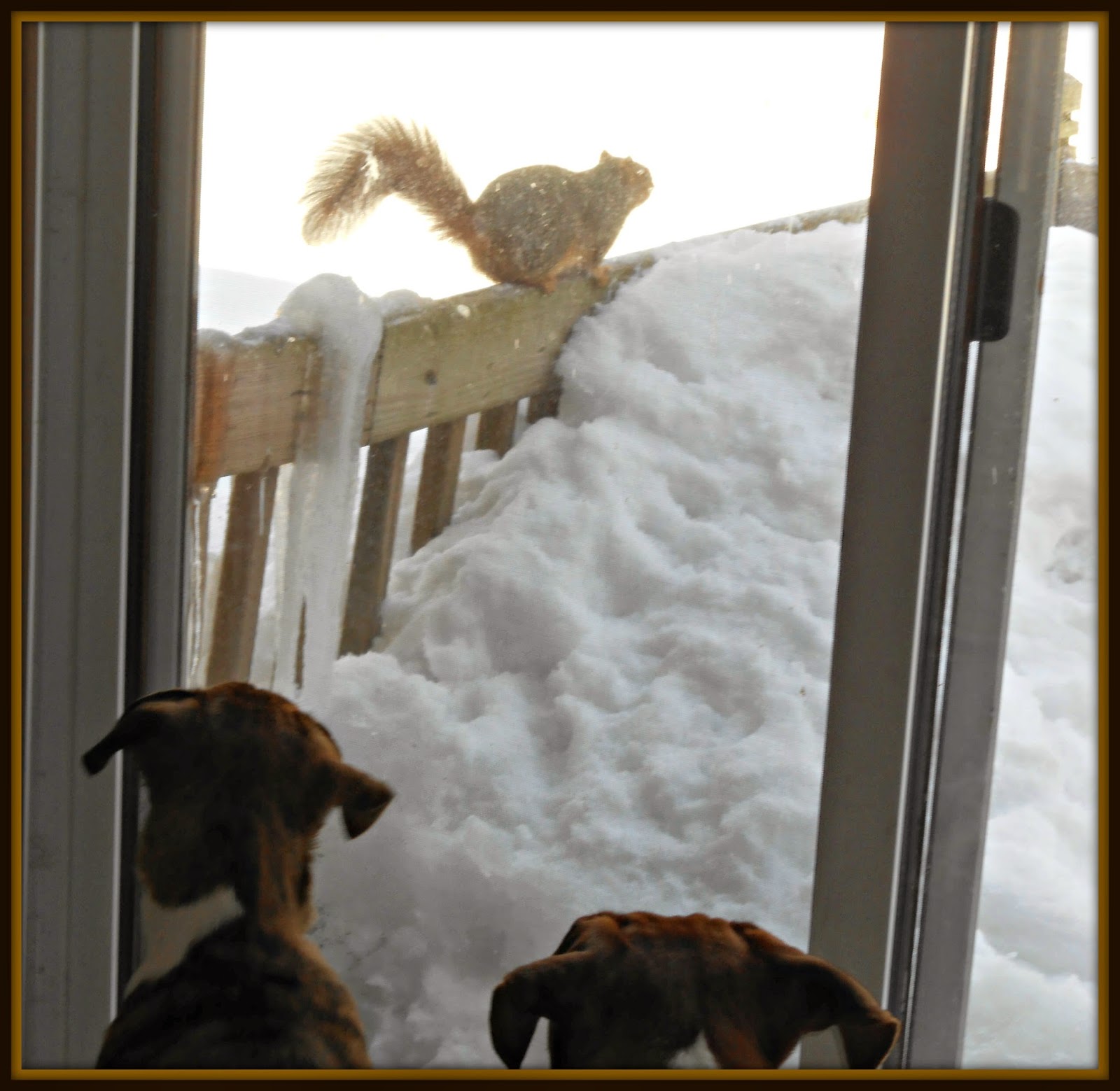 This is how the dogs spent their winter snow days.  We had to teach them not to jump at the window and go crazy because I was scared they would hit the window so hard they would go through it.  Also, I was worried what they would do when the door was open and the screen was closed.  They have been pretty good.  But some of those squirrels live in the trees in the back yard and let me tell you, when those dogs are in the back yard it's open season on squirrels!!

But Bosco's favorite pass time in the back yard is to pull the pond heater out of the pond. Too bad for Terry, we are putting the fence back around that area. I usually don't gloat..but Terry...I told you so!!


All this and I'm trying to reorganize my "Room".  Terry is going to revamp some shelves and I'm happy about that.

Tomorrow my daughter and I and my SIL (whose husband died a month ago while shoveling snow) and her daughter (who recently had a mastectomy) are going to the Olive Garden for lunch.

I've been pretty darned busy!  I LOVE being retired!!
Posted by Carol- Beads and Birds at 8:40 AM

I have lately discovered I am not a dog person. don't get me wrong I like them as long as they are someone else's.
my DD#1 has pups and is a happy camper so I get my dog fix when I am with her.
I am a cat person.I have 1 torti and we agree to disdain each other from a distance unless food is involved or a head scratch. though my poor kitty was a prisoner of the "kitty Goolag" AKA the no-kill shelter for 16 months so she had issues to begin with she is settling in enough to "get skitty" and tear off down the hall for no reason I can tell ;).

What a great post Carol! Thanks for sharing about the pups...you can tell they are happy!

Enjoy your 'girly' lunch with your family.

AAAaawwww i have to agree look at that FACE! :) What a sweety....but no more puppies for me if i can help it.... if and thats a big IF we ever do get another dog it will be fully grown and housebroken.. :)

You are definitely waaay more busy than this retired person. :) Hugs! deb

Your dogs are great. That's a lot lf snow out there. Sorry about mistakes buy iPad won't let me correct. You mean you got through on healthcare.gov.? A lot of people have told me they can't get through. That's great. Have a wonderful evening.

Thanks for the update on the puppies - I always enjoy seeing them because I miss mine so much.

So enjoy seeing puppy updates!!! SO, so cute!!!! Hope you had a good day out!!! Retirement is wonderful!!! But we put in our time didn't we!

Me Of Course: Yes! I got right on and entered all info and it was really easy. The hardest part was looking at all the plans, but since I knew what I wanted it wasn't that hard.

I'm not sure dogs think those crates are so wonderful. My big girl has to go in one when we visit my daughter and want to go somewhere. She manages to escape every time although my daughter's husband is unaware of that as we hurry into the house to see what's up.

The dogs have certainly settled in haven't they? It's great when they feel so at home!

My next computer will be a Mac. I am tired of changing operating systems. I have Win8 but use the desktop side almost exclusively. It works but I keep waiting for them to come up with a new one yet again.

Glad retirement is keeping you busy and happy!

That face in the first picture is beautiful :)

You have been busy. I also had to buy a new PC. I could not find a W7 so had to buy a W8. I dislike it sooo much that I want to throw it out the window. In the last year it has crashed twice and I have had it for other things to the PC guy three times. I could have bought a MAC for what I have paid in PC fixes. Boo hoo hoo. Glad you found a W7.
Thanks for the comment and well wishes for my mom.
Glad you are able to spend time with your daughter and SIL. I know it helps.
Your pup is adorable.
Have a nice weekend
Nicole/Beadwright

I love the pupdates! So glad everyone is enjoying them. I look at pictures of my past dogs and miss them so much. I'm looking forward to what ever dogs come next for me and am of course still loving the two I have.
From what I have heard of Win8 I'm very glad I was able to get Win7 while I still could.
Glad you are enjoying your retirement.

Carol, wonderful update.. I wish I could retire soon. I am glad you are happy... Your dogs are all so cute..They are sounds like my Goldie Girl.. Great photos, thank you for linking up with Saturday's Critters.. Have a happy weekend!

Carol, wonderful update.. I wish I could retire soon. I am glad you are happy... Your dogs are all so cute..They are sounds like my Goldie Girl.. Great photos, thank you for linking up with Saturday's Critters.. Have a happy weekend!