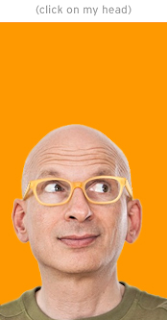 Do you know who Seth Godin is?  I followed a link to his blog about a week ago.  Sorry, I can't remember who posted about him.  If you are reading this and it was you, thank you.  Click this name for a  link to his post today and check him out.  He was the vice president of marketing for Yahoo.  He launched Squidoo, too.  His blog is mostly geared toward marketing so I suspect if you own a business you would find it interesting.  However, even if you don't, his thoughts on how people think, react and what motivates them is definitely worth reading. It's FFFT (Fine Food For Thought).


As a follow up to my Black Friday post all I can say is that times are a changin!  Stores opened on Thanksgiving.  Shoppers waited in line on Thursday, just like they used to do on Friday.  On Friday morning, all those stores were empty.  We went to Walmart with very few shoppers in the store and bought everything we wanted that was advertised in the Thursday ad.  We went to Menards and bought doggy beds and toys for Tyson.  Then out for breakfast and home to relax.  It's All Good!  How about you.  Did you shop? 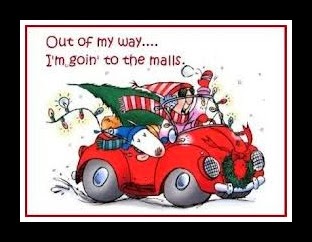 It has always been my tradition to start Christmas shopping on the day after Thanksgiving.  Wherever I worked, they KNEW I would not be there on the day after Turkey Day.  My daughter and I would trek over to Michigan City, Merrillville or Fort Wayne.  If the weather was bad, we went to the local malls.  It was always a busy day to shop, but we enjoyed being in the crowd and stopping somewhere for a nice lunch. That was before the Black Friday Frenzy hit. On Saturday, we always put up the tree and decorated the house. It was always an enjoyable weekend.

Then, some marketing engineer invented Black Friday. (After doing a little research, I found that Black Friday dates back to 1924 but it was never marketed to today's standards).  Out came the sale ads luring us with hugely discounted prices on just about anything you can imagine. Some hold off major purchases to see what the Thanksgiving newspaper will bring. Then they pour over the ads, making lists and creating their shopping strategies. Some (and I can never understand this one, especially since I live in the snowy Midwest) actually camp out in line at stores so they have a better chance to acquire the booty.  Retailers used to keep their ads a huge secret. Then the internet hackers came along a sneaked a peek on line of what deals were in store for the public.  Now retailers "leak" their ads themselves hoping to lure you there with earlier hours and deeper price cuts. Now, Walmart even offers to price match other retailer's ads BEFORE Black Friday.

About 20 years ago, K-Mart came up with the idea of opening with special deals on Thanksgiving. We had severe lack of funds back then.  The  sound on our TV broke in about September.  We brought another TV into the room so we could watch TV on the bigger screen while we listened to the smaller one.  We were hoping to hold off buying a new TV until Black Friday.  BUT, K-mart advertised opening on Thanksgiving at 8:00 in the AM and offered a 23" TV for $184. Back then that was a BIG TV at a super price.  So off we went to buy a TV.  No lines.  FEW people were even there to shop.  The clerk didn't even know where to find that TV. Finally Terry helped her get it and several others down from a high wall shelf.  A few other shoppers were there to get one too. We went back home to fix our meal and watch Macy's Parade and football on our new TV.  Opening on T-Day must have been a bust because it was years later before the stores started opening on Thanksgiving again.

So here we are with the Christmas shopping season upon us.  Our new tradition is to go to Menards.  They always have great stocking stuffers and its now a one stop event since our boys are older and we give them money to spend on after Christmas deals. Then we stop for breakfast and on to home to decorate the house.
No, I'm not shopping on Thanksgiving this year...but I thought about it for a minute when I saw that Walmart would have some unknown brand 32" TV for $98.  Nope...not going.  I'm promoting boycotting Thanksgiving Day shopping and hope EVERYONE else does too so workers are able to enjoy the day with their families or at the very least rest up for a very busy few weeks.

How about you?  Do you venture out on Black Friday?  How do you feel about shopping on Thanksgiving? O, I forgot.  Will you be shopping at small locally owned stores on Saturday?  I will.
Posted by Carol- Beads and Birds at 12:55 PM 9 comments:

Do I Want A Kindle Fire HDX? 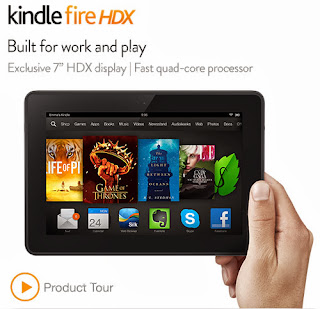 I think I do.
I don't want an Smart Phone.
I only want to use my phone to make and take calls.
I DON'T want the added monthly expense of Terry and I having phones that have features that we will never use.

Recently, I went with my grandson when he bought a new I-Phone.  While at the store, I looked at I-pads.  I admit, I had never even looked at them before and it piqued my interest.

So, I asked my most tech savy OTHER grandson, Ky, what he would suggest if I were going to by a tablet. He suggested the Kindle Fire.

I'm thinking I would like to be able to read digital magazines and books.  It would make blogging much easier to be able to take and edit pictures and upload them directly to the blog or a printer.  There are so many features that I think I would use.

I would sincerely like to hear any one's experience and advice about tablets.  I am seriously thinking that I "need" one ~lol~.
Posted by Carol- Beads and Birds at 7:31 AM 12 comments: 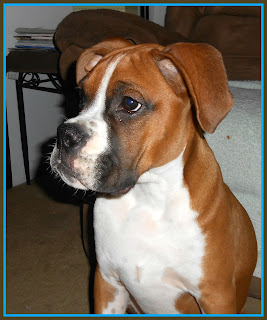 Here are the latest pics of the pup.  He is a typical Boxer.
He loves everyone.  Listens pretty well and is housebroken.
He gets a lot of play time and Corey takes him on a long walk everyday over to the county park.  I love to see how much they love each other.

Tyson loves everyone. BTW, he has a girlfriend on the other side of the back fence.  She is a much older German Shepherd.  I call her the Cougar!! They kiss through the fence. 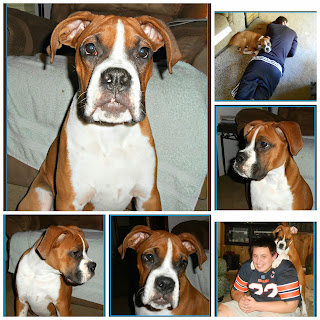 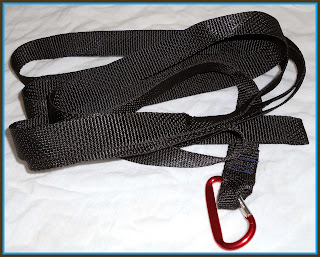 When I decided to retire, I guess I felt the need to justify being home and not contributing to our income.  So I keep thinking of all the things I do that actually save us money...like being able to cook meals now instead of carry out and frozen quick fixes.  We are loving that!

As long as I have collected crafty/ needlework components, I have called them my retirement fund.  My thinking was that when I retired, I wouldn't want to spend money on hobbies, so whatever I collected up to now, I would find a use for when I retire.

Yahoo!! I found my first stash buster slash retirement savings!!  Corey wanted a longer leash for Tyson and thought he would buy one this weekend.  Looking through my "stash" I found this web band that I knew I had.  It is 12 ft long.  The end is one of those key clips.  See...new leash and no money spent.  The clip could actually attach to another leash in case Corey wants it even longer.   We'll see if he likes it when he comes home.

Every year at just about this time in the fall I come down with a respiratory bug.  It hit just a little late this year and I am still recouping so making a leash today and posting is a BIG deal ~lol~.

Happy Weekend.  Don't let the coming holidays stress you out!
Posted by Carol- Beads and Birds at 10:59 AM 10 comments: