I've Got The Blues

Well, you know me so you probably thought the blues I have is the lack of sun kind that I suffer with every winter...Nope....They're gone.

And if you know me even better, you might think I'm taking about the B.B. King kind.  Well, I DO have those blues and listen to The Blues a lot.  My kind of music when I want to be mellow.

But, you only have to know me a little to know that I must be talking about the BLUES...The Birdy Blues..my beloved blue birds.  Yes, of course they are back!! Actually, I was pretty surprised to find that they were here most of the winter. 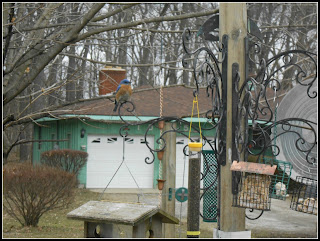 This is actually a picture taken in  the late winter.
I noticed a male at my feeder stand.  I didn't have any worms out, but put some out that day.  I think we had a couple of different pairs visiting.

At least two pairs visited the nesting boxes and there was a little territorial drama for a few days. 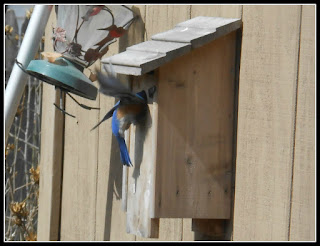 Here is one of the males scoping out a nest box. The new owners of our local  Birds Unlimited suggested putting the boxes on the side of our house to protect the Blues from predators. I wasn't too sure I wanted to do that, but the safety of it did make sense so we tried it.  Of all our boxes, the one on the house was the box they fought over. I did watch in horror one day when a female English Sparrow actually flew up to the house and tried to drag the female Blue out.  I can't tell you how MAD we were.  I don't know how the birds resolved the issue..but our sparrow traps are up and ready when we are home. 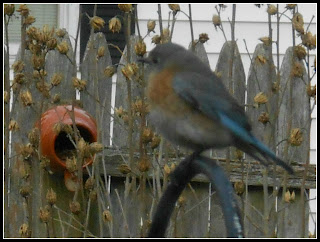 This is the female.  You can see that she is mostly grey.  Her color gets even more dull as the spring progresses. 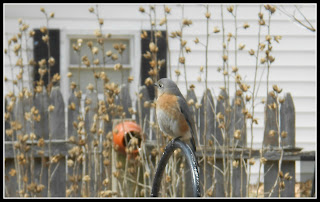 Here she is again before she laid eggs.  This year that darn rodent Phil could not have been more wrong about an early spring.  We had really cold weather up to just a few weeks ago.  Once the female laid eggs we NEVER saw her again until they hatched.  That is kind of unusual as we usually see her once in a while.  We guessed that she was staying on the eggs due to the weather.

These are a few pics that I took  as we patiently waited for the eggs to hatch.  When that day finally arrived..I think it was a week ago Thursday..I was lucky to be home and watch the baby blues come out. 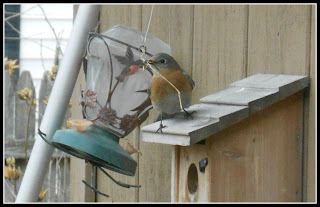 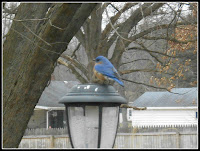 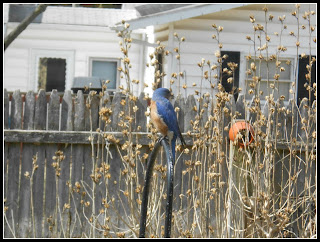 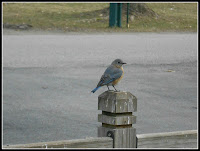 I was looking out the kitchen window and some small movement along the fence caught my eye.  Then I noticed a baby blue sitting on the Trumpet Vine....he did not move an inch!!  The mother would fly to him and still he clung to that vine.  I just couldn't leave to get my camera.  I was sure there were more babies and I didn't want to miss a thing.  Pretty soon I watched a little head pop out of the house, pop back in, then a baby got up as if to fly and popped back down.  This went on for quite a little while.  Then...I swear this is true...the mother flew over to the house and put her head in the door and I got the distinct impression that she was giving those babies what for because pretty soon they both came out and flew up to the tree.  The bird baby was still clinging to that vine.  I watched him attempt to fly and went over the fence to the ground.  OMGosh, the neighbor's dog was out and here she came.  I hurried outside thinking I could check on the baby but the mother and father went into defense mode.  I looked up to see a Parent Blue diving for my head.  I said OK, OK I'm going in...I'd NEVER hurt your babies.

So we waited because we knew pretty soon those babies would be at the feeder with there parents.  At least I could count them and know if the first baby made it.  From past experience I knew that would probably be in about a week.  We waited and watched.  Kept a supply of worms in the new feeder I bought that deters Starlings from reaching the worms. 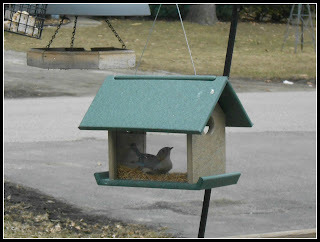 Then, about a week went by.  I watched as a parent got a worm and flew into the tree. 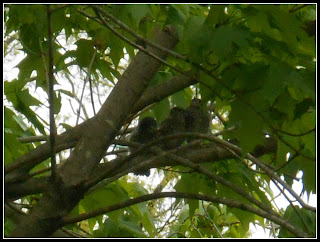 Here they are!! All three safe and sound and visiting the feeder every day.
Blue Birds really are the Birds of Happiness.

Here is a closer look at the new feed we got.  It is perfect at keeping Starlings out because the holes on the sides are too high for their heads to reach in and get worms.  The is also room for the Blues to go in over the plexi sides.  Its also made from recycled material and will not rot and washes nicely.  We worth the money if you want to attract Blues. 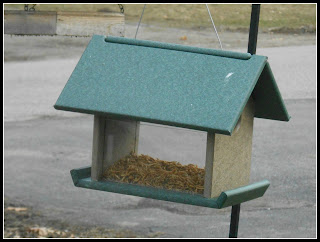 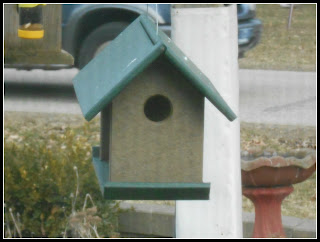 Fun to read the whole tale of the bluebirds season. Glad the dog didn't get the bird. I had a dog that caught a bird once. I just couldn't believe it but did make him let go. He was used to catching Frisbees and I wonder if he just thought he was doing that. The bird flew away and I always hoped he hadn't really hurt it.

Awwwww... they are just beautiful. They definitely brighten a day, don't they? We have the boxes all around the area here, you mostly see them attached to fence posts, but we rarely see them in the middle of town. I definitely remember seeing them all over the farm growing up though... always made me smile!

Thanks for sharing the Blue Bird Saga Carol! :) Lovely photos and story telling! Miss having my feeder up and being entertained by the birds... Hubby is still working on my bookshelves but hopefully he'll finish the roof on my feeder soon! Hugs! deb

this is wonderful! thank you so very much for sharing their journey... the pictures are great and your telling their story was so interesting.

I love the coming of the birds!
but what do they sound like?
I have robins chickadees,red wing blackbirds,crows,woodpeckers and junkos, with the occasional eagle and hawk flyovers.
but the backyard sounds heavenly around 4:30 when the sun first comes up!

Oh Carol - how exciting!
They are just beautiful. We see single Eastern Bluebirds and we are in the east! Lucky you - to have a whole family, there.

WONDERFUL baby bird hatchling story, they are so sweet. You worked hard on these photos and words. THANK YOU!

How wonderful your birds. It is something to look forward to. You've got a great place for them and am sure they are very thankful. :)) Have a great week Carol.

We have bluebirds nesting in our yard every year and I just love watching them, too! Thanks for sharing your photos and story.
I shared these photos on my blog several years ago: http://feltsewgood.blogspot.com/2009/06/bluebirds-of-happiness.html
Have a wonderful day!