W hat Do YOU Do With These? 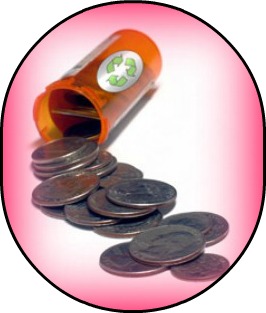 Eight of these come to my house every month.
Nope, they don't fall out of the sky.
I have to actually go to Walmart and pick them up.
And they are NOT free.
I actually pay a lot of money for them.
I wondered what to do with the empties.

They are good for beads and buttons.

You can keep $10 in quarters in them . That makes a great Christmas  fund.

You can keep them in your purse to store change.  No more digging...and they are most helpful at the cash register.

If you have any ideas.  Any at all.  Please let me know.  I refuse to send them to the landfill.
Posted by Carol- Beads and Birds at 6:56 AM 22 comments 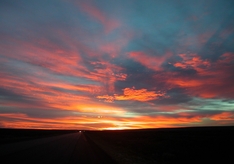 I can't look at a sunrise without feeling a tremendous sense of serenity, peace and calm. It's almost, if not, a spiritual experience.
Not matter what Higher Power you believe in, seeing the sunrise at just that moment of beauty before the sun rises just a little higher, is a moment to remember throughout the day.

I believe that if you ask for what you want, it will come to you.
A daily affirmation is just a thought to keep your mind on the right path.  What I am talking about is something more than an affirmation.  It is a desire deep inside that takes hold of your sub-conscience and begs to be heard.

A rather trivial example is what happened to me recently.  You know I have been unsettled at work this year. I wasn't sure if I wanted to quit now, work part time, or retire.  Terry and I discussed it and retiring was decided, but I still couldn't reach that elusive harmony. My deepest desire was to begin working part time as I did when I was hired 12 years ago.  I was burned out when I left another job and came to this one.  At the time,  part time job was the answer.  In my heart, I knew I was in that same situation yet again.  Also, my position would not be that easy to fill.  How much notice should I give before I leave.  I wanted to be fair, but I also wanted to look out for myself in certain matters.  I dwelled on it for almost a month.  Then one morning at work, our owner called us together for a staff meeting.  He gave us the news that we had lost one of our customers to a  business merger.  The news came at the worst time of the year, as we usually have  a slow end of the year and cash flow would be tight.  There were not going to be any layoffs, but we needed to replace that customer and increase sales to maintain the same staff level. If we had any questions or concerns he welcomed us to come to him with further questions.

Here's where the answer from the Universe comes in. When I spoke with him, I told him that I would like to again work part time.  I compromised set part time hours with an offer to do what I needed to do for the day then go home.  I also mentioned to him that if things didn't pick up and he felt the need to limit office staff, I wanted him to take into consideration that I am going to retire at the end of the year.

Relief....calm...serenity. I am a path to Harmony at work.

I would be interested to know what you think about asking for what you want, whether it's prayer to your God or whatever Higher Power you recognize.
Posted by Carol- Beads and Birds at 11:42 AM 11 comments

My Mind Is Calm 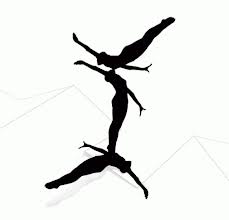 I had to think about that for a while. As I see it, harmony IS balance. For me, the most difficult thing in my life is harmonizing my work away from home life, my home life, my family life and my personal achievement life.  That's where the part of Maire's quote comes in...what requires change and what requires appreciation.

Then I realized that my thinking about how to achieve  harmony is all wrong. Every element can't be harmonious unless they are each in harmony.

I'm off to a great start. My first step was to realize that I need to renew my commitment to positive thinking and attracting positive energy.

Step One:  My Mind Is Calm 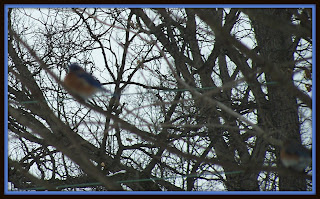 We've done a lot to attract blue birds to our yard, and to protect them from their enemies when they nest.

Usually, after their nesting is done in the spring, we don't see them again.  I always thought they fly further south for the winter.

Since I work all day, I don't know what goes on at the feeders during the day. Over the holidays, I had a lot of days off and boy was I ever surprised to see bluebirds in the front yard maple tree.  After a few days, I realized that they come every day at about 1:00 and then  again around 4.  I make sure they have a good supply of meal worms. 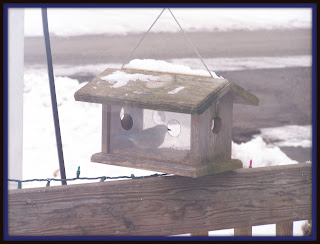 I put the worms in this feeder.  The holes on the sides are blue bird size, though I have seen the Carolina Wrens eating there too. 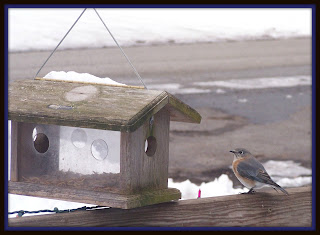 There are usually about 10 bluebirds at one time.  Since both broods were 4 each this year, I wonder if the 10 that come now are the parents and the babies.

I tried to get a pic of more of them at one time, but any movement at the window (or when a car goes by) sends them up into the tree. 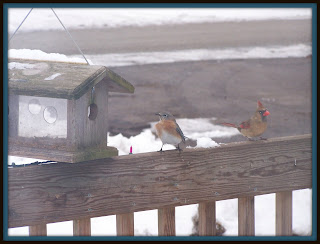 I love it that all the birds seem to get along at this time of the year.  Mostly we have cardinals, nuthatch, titmouse, chickadees, bluebirds and of course the stinking english sparrows. Lots more varieties come and go.

The hawk still comes...but that's nature.  And I love it when the crows come too. They are amazing birds.


And since this is a critter update, I'll have to mention Rockie and Rickie.  We haven't seen them for a few months.  We figured out that they were hanging out together since they were taking turns at the sandwich bowl.  We surmise that Rockie was a girl and Rickie looked a little more masculine so maybe he was a  boy.  Even though they haven't come to eat, Corey saw them cross the road a few nights ago when he came to visit. We'll probably see little Rockies in the spring.

Opie still comes around too if I put food out.  I try not to now.  We have feral cats living around here.  I suspect that the hawk steals a kitty or to.  I won't tell you how I know...its all nature.

The squirrels still come, but they don't seem to be the same as we had a few years ago.  They are smaller and thinner and their tails are thin.  Not sure what's up with that, but I miss the ones that were around before.   We think the guy across the street was shooting them.  If I had proof, I'd have had the DNR out here faster than he could reload. 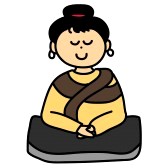 Here it is, the very beginning of a new year. They fly by.  They truly do.  It seems like yesterday when I was posting about the Blue Moon that occurred in January 2010.

Robin recently asked me how my 'focus' word, FREEDOM,  for 2012 influenced my year.  I had to go back and read what I wanted it to help me do. I have to tell you that I think a did a pretty good job of allowing myself to be and SHOW more of myself. For me, a focus word is kind of like what I think about giving something up for LENT. I view it as a reminder to improve myself. To choose  an aspect of my personality that I would like to change.  Believe me, I have come a LONG way in that regard.

Free from guilt, but not why you would think. I get caught up in my desire to create and join a challenge thinking it will help me to focus on the project I want to make. That doesn't work for me. The only challenge I actually accomplished was the 360 Challenge to de-clutter at least 360 items from our home.  I did great and am proud and happy that I was able to do it.

I have been smiling and laughing so much this year.  I think its because I have freedom of responsibility for the kids who have moved into their own home this year.

So. What is my FOCUS word for this year?

It's not just getting along with people. Its also about living in and working in orderly surroundings. Its about keeping your friends close and surrounding yourself with like minded people. Its about being sympathetic and cooperative.  It's about sharing yourself with others.  It's a state of mind that you bring to your art too. It's about finding the time to pursuit your personal satisfaction.   It's about quiet time to find your center and recharge your energy.

Take a moment to think about what would make your life more harmonious.  Even if its not YOUR focus word, maybe you could pick just one thing that would bring more harmony to your life and try to focus on it.

I'd love to hear if you have selected a WORD, and why...especially WHY.
Posted by Carol- Beads and Birds at 10:33 PM 8 comments