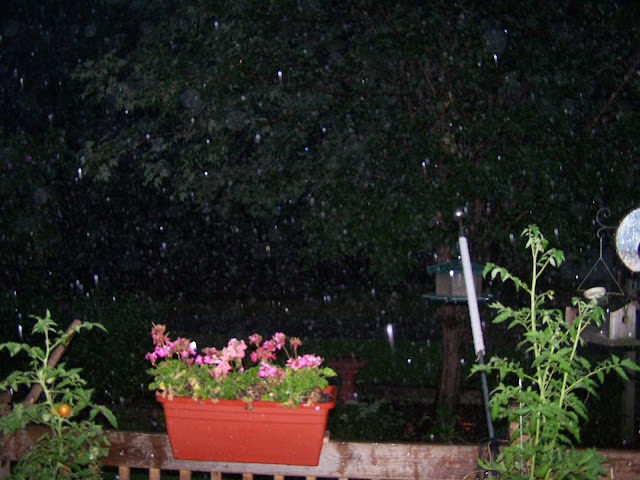 Like 56%  of the country, we are in draught conditions.  This is a pic taken this morning at  8AM.  Yep, that's rain.  Pouring rain.  A thunderstorm. 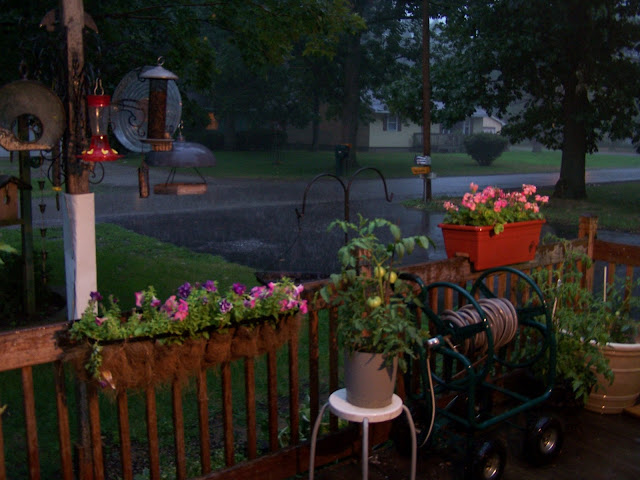 Here's a better picture. Its 8:32 and still pouring. I hope it makes a dent in our needed water.


Life is all about finding balance in every aspect of your life.
I strive to achieve it, but outside influences put up road blocks.
I have forgotten to utilize the power of positive attraction.
Recent events have been out of my control, and I need to find my stride and balance again.

Laurie and the kids had moved to a rental home in a pretty good neighborhood. Promises were made to her about certain things that would make her home more safe and other repairs that needed to be made.  Like plumbing that would accommodate the water discharge from the washer. There was a murder a few blocks away which scared the hell out of her. Without going into further details, she moved out in a rush a few weeks ago.  We made a place for most of their stuff.  Gave them a place to sleep temporarily and pretty much forced her to find a better place to be.  That worked out well. They are now in the apartment complex where Terry is the Maintenance Manager living in a second story apartment.  Moving yet again was a lot of turmoil for the kids but I think they like it.

I have had a lot of time off work.  Terry had a terrible RA flare up last week.  I can't remember one this bad since he was first diagnosed. I stayed home with him one day and got him into his RA doc. After some lab testing of fluid removed from his elbow, RA doc referred us to an Orthopedic Surgeon. I'm not sure what I think about the result of that consultation. We are waiting that one out.


So, that brings me to this week. I have taken 3 days off to bring balance back to my being.
Bringing my home back to order.

Tomorrow we are back to the RA doc. Terry is in an experimental drug program and tomorrow is a couple of hours of testing. It would appear after last week that the drug is not working. Terry and RA doc will evaluate whether Terry will continue in the program, which he has been of for a year now.

Think about a washing machine that is in the spin cycle and the load has shifted to one side.  That has been July.  And I haven't even mentioned the changes at work.  We are in a new building that is beautiful. But to save money, we have one big beautiful open office that has those movable partitions  to separate 3 offices for Sue, Charlene and me.  Not cubicles, just dividers.  Our areas look into a common area, so at times it can be very distracting.  It is not working for me.  I need a door to close to be quiet at times...I'm on the phone a lot....so, I have moved in my countdown to retirement...that is kind of sad for me.

There you go.  I'm slowing down the Crazy Train.  I'm going to check the weather, get another cup of coffee and move to my sewing machine.  I can always find balance there!!
Posted by Carol- Beads and Birds at 9:23 AM 17 comments: 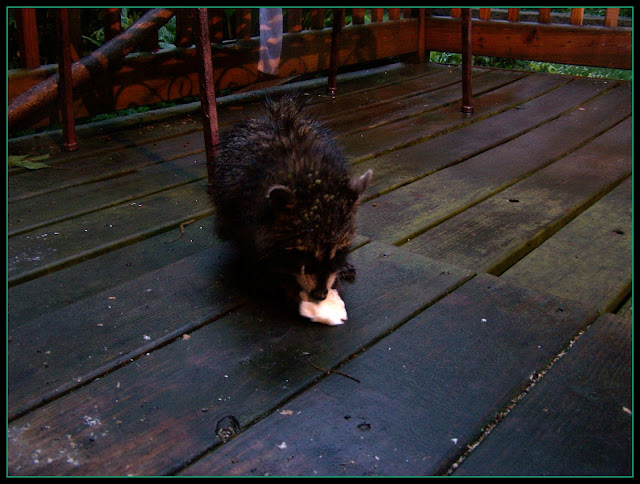 I live three houses off a connecting highway.  Its not uncommon to see road kill almost everyday. I live very near the river, so I see a family of raccoons on the road pretty often. On the evening of one such morning, a little, no very tiny, raccoon appeared on the front deck.  He could barely climb the footer post to crawl up.  He came to eat the left over peanut butter bread that I leave for the squirrels.  At first, he would come about 7 at night (still very light outside).  He would eat a bit then curl up in a corner for a nap.  A few hours later he would wake up and eat a little more.  He got used to hearing my Critter Voice and is not scared of me, though Terry startles him.  Junior watches him...even waits for him to come every night.  We were feeling so sorry for him because he was so tiny.  This picture was taken about 2 weeks after he started coming.  ( see the stickers all over his head? After a few days they were gone).  We named him Rocky.  He must sleep under our deck because about 9 PM or so I call his name and he'll come up to eat.

A couple of days ago,  he started to bring a friend that is just a little older and bigger than him.  We call him Ricky.  Now, later in the night (after the bread is gone) Randy appears.  Sometimes Roger comes too.

I  know, I know, they are a nuisance.   I'll be sorry.  But honestly I am only putting enough out for the orphan who shares it with his friend.  The others may get the crumbs.  Living near the river, we have always had wildlife coming to the yard.  This is nothing new.  It keeps life interesting. 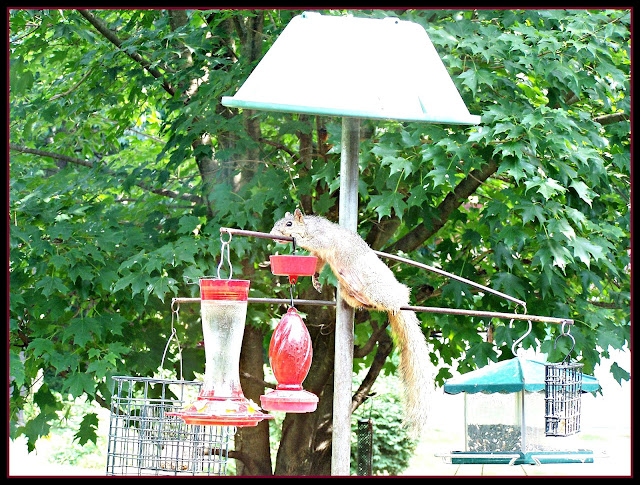 Most of the country has been unbelievably hot, as we are too.  And we are in drought conditions. My Chippys are too hot to pop. They spend a lot of time laying around on the feeder....on a tree branch...on the cement blocks that trim off my front garden.  We make sure there is plenty of water in the front bird baths for them.  Yes, they steal the birdseed, but that is life at the feeders.  Its all good! 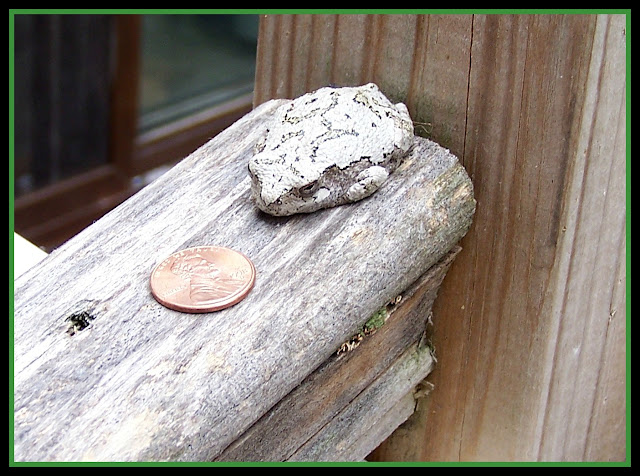 Have you ever seen a Tree Frog?  Well we have lots of them in the back yard.  This little guy was sleeping on the front deck banister.  I put the penny next to him so you can see how small he is.  Tree Frogs change color to camouflage themselves.  The banister wood is weathered grey.  Little Frog is grey too, but you can see his green in the folds of his skin.  He slept there all day.

There has been lots going on around here...normal life stuff...lots of drama...I took a few days off to just be alone and quiet.  I'll let you know how that works out ~lol~.
Posted by Carol- Beads and Birds at 8:48 AM 14 comments: 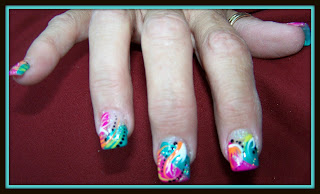 Years ago I saw the movie  "Every Which Way But Loose".  If you ever saw it, you may remember to grandma that sat on the porch with a shotgun. Even way back then I wondered how I would act when I got to be that age and what "style" I would have.  I always saw myself in older age as someone who still wore makeup, dressed up to go to the grocery store, hair well dressed,  always wore jewelry, heels and was well manicured.

Well,  I most always wear jeans, but pretty much dress  nicely even to go to Walmart. No heels!! Sciatic issues and now a bad hip on the other side keeps me in flat shoes, most always cute flip flops and sandals. Of COURSE I always wear jewelry.  My hair is well coiffed, even if it means pulling it up in this heat.

Oh yes, the nails.  Well, my nails have never been good.  They are weak and lately have been splitting. So off I went to the place I always thought I would someday go...Cali Nails.  The only decision was gel or acrylic tips and length.  Since I type, sew an stitch, I chose a shorter length.   I took a poll of the ladies there and they all swear by acrylic. The owner is known to be an nail artist so I told her to paint them how ever she wanted. I chose Hot Pink and Aqua and she took it from there. They look fab and feel OK. I hope I have good luck with them because I love the look!!!

Do you have your nails done ?  It's very popular in this area.
Posted by Carol- Beads and Birds at 9:53 PM 13 comments: