Where Did You Find A Hero 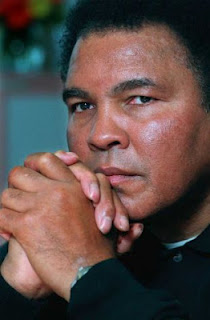 This weekend my daughter took the boys to the Mohamed Ali Museum.

Mohamed Ali has been Corey's Hero for a long time. Kids all have a hero.  Sometimes their heroes aren't who we would choose for them.  Some we consider to be unworthy of hero status.  Whether its a rock star, movie star, athlete or someone they personally know, kids will take direction, whether good or bad, from someone they admire.

My grandson, Corey has studied Ali's life.  If you have ever read any of Ali's quotes (“Champions aren´t made in the gyms. Champions are made from something they have deep inside them - a desire, a dream, a vision.” Just one of many) you realize there is a lot more to him than many know.

If you live near south-west Michigan, particularly Berrien County, you know or have heard of the MANY generous acts Ali has done. He is a very beloved person and celebrity.

Though my thoughts posted here are praise of this man, they are to speak about the effect he has had on my grandson.  Kids today need to be focused on something positive.  Corey has been focused since he was 6 on athletics.  The focus made him aware of how important his grades were, even if it was to maintain the ability to play on school teams. It became an important help in building his self-esteem and confidence. It became a TREMENDOUS purpose to avoid drugs and maintain a healthy body. He has played baseball, football and wrestled.  Outside school, he has attended a gym for 3 years studying Muay Thai and now focuses on boxing.
Yes, that's a worry.  But its HIS focus and choice to make and I honor it.

I don't think I have a hero, but there are MANY that I admire.  How about you?
Posted by Carol- Beads and Birds at 12:03 PM

too many to name! I've said before I have a hard time picking just one. playing favourites was never something I was especially good at because (i feel) there are so many things out there to see learn and admire that I get lost in the "many-ness" of it all.
my girls, when they were small, always wanted to know what my favourite this-or-that was and were quite upset with me when I could not answer this seemingly simple question.
the boy could care less but the girls had to KNOW! I still wonder why that was such an important question.
even when it came to them, I had no favourites, they would accuse me of loving so-and-so more and I would tell them I can't love you more or less or even the same, because you are all my children and I love you all different.
I love the many-ness of things and I admire many people from Einstein to Jung, Joplin(Janice and Scott) to Austin, my grandfather, both Hepburn's, Earhart and even secretariat make the list. all have something to admire about them something great they have done. despite the environments they grew up and lived in, they overcame and achieved.
and that is admirable in anyone.

That's the same way I feel. There are those that inspire me and I admire and that is part of what makes me who I am. I can't pick one that has had the MOST influence on me, but I have developed into a collage of all.

Your grandson sounds like a wonderful young man and you sound so proud of and you should be. It all stands to reason that whatever choices he makes; will be the right ones for him. Great post.

Wonderful post, Carol :-)
I'm sure that if asked to choose more than one hero, Corey would add you and Terry to his list!

Personally, I, too, would not be able to choose one hero - there have been lots, but very few of them are/were ever well known. They've been teachers, family members, neighbors, co-workers, and even a spouse! ;-)

I do think it's very sad that more and more of today's stars of sports, politics, and entertainment have proven themselves unworthy to be any child's hero.

What a great post. Boxing can be scary when the boxer doesn't know when to hang up the gloves. Corey sounds like he knows what he wants. Good luck to him.

It's good to have heroes. My dad was a lightweight boxer when he was in the army. I don't understand the appeal of it but it is a sport and it helps kids to learn the discipline of effort and sportsmanship. Drugs would sure be a poor alternative. It's good Corey is enjoying a variety of sports. It's a good way to learn what you really like to do.

Plenty of famous people I admire for their unique blend of strengths and personality such as Katherine Hepburn, Joan Baez, Jesse Owens, Pete Seeger. and lesser known people I admire would be my grandfather, grandmother and my mother. Good post Carol, I must say I admire you and your grandson for following the paths that are right for you.