Off The Roller Coaster, Still On The Crazy Train.

You know, sometimes when you haven't blogged for a while, its hard to post. Many times I think about something I have to say, but by the time I get the time, I decide against it. So, here's the update on what has been going on in the last month.

I'm off the roller coaster, as I call it.  The kids are moved and settled in.  I have been spending every spare minute cleaning closets and getting "my" room back to what it was before they moved back here a couple of years ago.  Its no wonder I haven't done anything creative.  There just was no room.  If I had the time, I couldn't find what I wanted. Here's a good example. 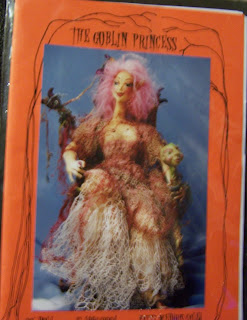 I bought this pattern in March 2007.  I know that because I found it just the other day, still in the UPS envelope it came in.  I had taken it to work to make copies of the pattern so I could cut it out, and put them back in the envelope.  I like to make copies and enclose them in clear contact paper making it easy to trace around them onto the fabric I would use.  I misplaced it when I shoved everything into any nook and cranny  when the boys moved in.

I even searched for the pattern to buy another, but I was searching for a gypsy pattern because that's what I think of her being.  She's out of print so I'm glad I found her.  She's not on my current project list, but I am sure I will NOT to misplace her again!

I took a huge box of art and scrap-booking supplies, paper, pencils, folders and any other items over to the school that I am sure the elementary school teachers would be able to use.

I am still committed to the 360 challenge.  I took a  lot of pictures of the things that have been taken to Good Will, given to Laurie, and taken other places where they will be useful.  I am happy to say that I have NOT replaced them with more stuff.  Well, except a little, well, more than a little, fabric. 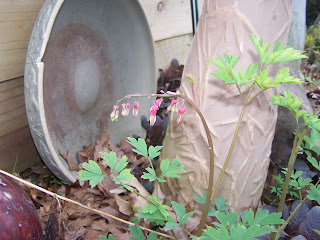 Like almost everyone across the country, we enjoyed a mild winter and an unseasonably warm late winter.  The evidence is shown in this bleeding heart that was blooming at the beginning of March.

I don't know much about Bleeding Heart, but Laurie brought this one from her yard when she moved in. I'm pretty sure that early March is way early for it to be blooming.  Even though we have had some frosts, it is still flourishing. 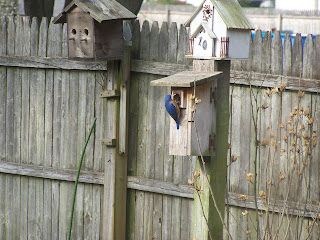 We have the pleasure of seeing our bluebirds return.  It appears that we have more than one pair in the area. We see them in the back yard and at the front yard feeders.  I am always amazed when I watch one swoop to the ground from a tree branch and return with a bug in its beak.  How do they know the bugs are there? We have several bluebird houses in the back yard, though this is only one of them and not the one that this male coaxed his mate to. She is sitting there, next to the one SHE has chosen, waiting... 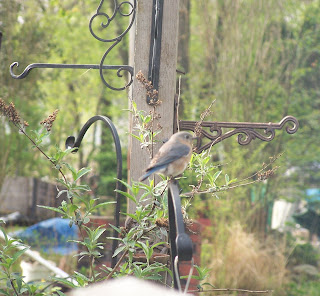 So, you're wondering what the heck the Crazy Train is?!?
Well, that's where I work!  A little over a year ago, they hired Maria to take some of my work load.  Our owner also bought a new HUGE building to renovate...totally... and said we would move operations in 2012.
Well, Maria decided she wanted to pursue other opportunities.  Now we have Charlene who has just a fantastic personality and is very smart and learns quickly. Training has been relatively easy, though interruptions can cause some minor bumps.  AND, the new location is just about ready.  The first 2 machines should be moved in about 3 weeks.  I'm trying to figure out how to twitch my nose and make it all happen over night.  Its a Crazy Train, but at least I'm not the Engineer.
Though I may be a bad blogger, I have been a good blog friend and have enjoyed seeing what all my friends have been doing. Please leave a comment.  I LOVE to talk to everyone.
Posted by Carol- Beads and Birds at 3:02 PM

it is very nice to see you here... i was hoping so much that the hiatus was time spent redefining your spaces - setting up places where you can feel relaxed and inspired... yes, everything seemed to bloom so very early, didn't it?
and i will have to remember that line 'it's a crazy train, but at least i'm not the engineer.'
:0) hoping the transition happens as smoothly as possible...

Its a doll pattern by Patty Culea. A lot of her dress is made from a doily. I used to make dolls years ago and thought when I bought this pattern, I would use it for inspiration to do a much smaller version for a design idea I have. It's pushed much farther down my To Do list now.

So glad you have 'your space' back. Looking very hard for my 'new space'. House hunting again Tuesday evening....cross your fingers.

Leave a comment? Sure thing for one of the best blog friends indeed. Life getting in the way of creating is happening to me right now, but I also try to keep up with others wonderful.work. Cute doll pattern, think you can do something with it. Lovey bird photos! Bluebirds
Visit occasionally here, so special.

Leave a comment? Sure thing for one of the best blog friends indeed. Life getting in the way of creating is happening to me right now, but I also try to keep up with others wonderful.work. Cute doll pattern, think you can do something with it. Lovey bird photos! Bluebirds
Visit occasionally here, so special.

One day at a time....how many times have we said that to others but fail to repeat it to ourselves. Love the doll pattern, I have many dolls waiting in the wings myself. Love to make them. Patty's patterns and books are such fun to browse and use. And they lend themselves so easily to being beaded. Good luck Carol, and enjoy your new found space. Happy Beading.

I check about every other day to see what's new here. Glad to hear progress is being made at home and on the J O B. And yes, you have been a good blog friend. A great blog friend!! I look forward to your comments on my blog. :D

Congratulations on getting your creative space back and thank you for showing pictures of the bluebirds. I have never seen one in real life.

Glad things are beginning to settle down for you at home and soon, at work. Then you can get some art done- - no, it'll be flower planting time! You'll enjoy that though.

I know what you mean about blogging. I have something I can post and it just might get there tomorrow too!

Hi Carol. Looks like you've been a busy little bee. Well now that you have some space you can start up your creations. I love that pattern. Good to read you and glad that you are doing fine. Have a great rest of the week.

Beautiful blooms and birds. I hope the crazy train slows down for you!

It was nice hearing from you again! I was just beginning to wonder what were you doing :)

I should have joined the 360 challenge because my house is going to burst one day with all the things I collect to recycle. Mostly paper. Because I like to make paper of my own. In the end it's all for the better.

The Goblin princess looks fantastic and I do hope you make it one day and show it to us here.

Have a lovely weekend and blog more. I always enjoy reading your posts.

But you're a great blogger!
And I love those bluebirds...we don't see them up here.