Spring Is Here, But Has Anyone Told The Weatherman!! 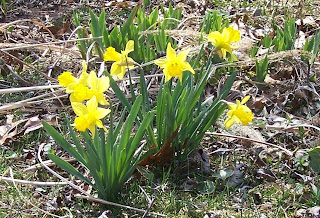 We have daffodils blooming by the pond. The lilac bushes are budding right along with some of the other bushes.  The birds are building nests and you can hear see male sparrows sitting on the top of the birdhouses they have selected, calling for a mate to join them.
O, but what happened yesterday (Saturday)!  Snow mixed with rain fell in broad daylight, dashing hopes of shorts and flip flops coming out anytime soon. Forget about working in the yard to clear debris and leaves left from late fall. 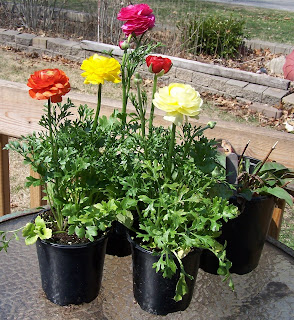 But what do I care!!  I know the weather will get warmer and when it does, I'M READY! I found these Ranunculus.  I liked them so much after I got them home that I went back and bought 7 more pots. I usually select shades of purple or orange, but Terry wanted me to buy all colors so that's what we did. When it gets just a little warmer, we'll go out to the pond and move he ornamental grasses farther from the pond.  Terry planted them too close and they have spread to unmanagable sizes. Yay for me, because I have flower plans for where they were.   The wind we had brought to light some issues with our privacy fence.  Our lot is 285' long and the perimeter is privacy fenced.  The wind blew down a couple of sections which made us realize that we need to start replacing it all.  Its been up for more than 25 years so we expected that we would have to.  Its not such an issue as far as the work goes because the boys are always willing to work and learn something new, but financially at $25 a section plus new posts, well darn it!!
Terry just called me to the window.  Bluebirds are scoping out one of our bird houses.  They are so beautiful, but we have so many English Sparrows around which love to kill them, that I almost would rather the BB move on.  We'll see how it goes.
I have been making fabric (shabby chic) flowers.  I'll be showing them later in the week.
Junior is doing very well and looks great. Some days he's tired, but mostly still loves to chase the laser light.
For those that have been asking, on April 7 I went to the dentist to have a mold made for my falsies.  Usually two weeks later you go back for the first fitting.  But my dentist took my deposit and went on vacation ~lol~ so I don't go back now until April 26. I have been really pleased with this entire situation. I am patiently waiting to have them and feel comfortable with them.  On August 7, Terry and I will be married 40 years and I have already paid to have our pictures taken by a photographer for the newspaper. Gosh I love my guy.
So, please remember all the things that you are grateful for today.
I'm thinking of my family and friends, pets and critters, jobs and the ability to help those in need.
Posted by Carol- Beads and Birds at 12:29 PM

OH Carol! Congratulations!! 40 years, WOW! you are blessed ;)
those ranunculous are lovely but they don't last too long and won't over winter unless you dig 'em up and I buy them every year because they are so pretty! along with tones of glads they are the one thing I spend gobs on every year because I haven't figured out how to over winter them successfully yet! cnce I do watch out!)

I knew when I bought the flowers that they were annuals. I don't buy many annuals, but they were so pretty I just couldn't pass them up. I'll just try to get seeds from them and try to start them inside next year. I have snapdragons that keep coming back every year from their sees on their own, as well as Moon Flowers.

i leave my ranunculus in the ground and they spring up again next Spring, such surprises.
Hey i hope that dentist comes back bright and fresh from his hols.
Nice to see you out and about and happy...k.

I love reading the stories you tell about you and your hubby. And your life.

Oh Carol! Your ranunculus plants are beautiful! :-)
I know you are anxious to get out in your yard and garden. It was cold here too this weekend. We had part of that storm that hit the southeast coast so hard.

At this point we only have daffodils and forsythia in bloom but it won't be long now before the violets (YOUR fave!) come out, too!

Bad you!! You reminded me that I USED to have a large Forsythia. Terry got brave with the Corey's support and cut down my bush last summer. It was blocking the view to the back garage. THAT'S WHY I LIKED IT!!. ~LOL~

Hi Carol. Isn't it so much fun being in one's garden? Yes, we aren't going anywhere, we are staying put. Congrats on 40 years, WOW...that is so great. We've been married 30 years and we are just as happy. Glad you are getting your "falsies" as you say (tee hee) finished. I'm sure you will be very happy once it's all complete. Thx for stopping by my blog and I just love your flowers. I actually don't have Ranunculus and now you got me wanting to run out and get some. Tee Hee. take care amiga.

It sounds like you are ready for spring! That is a lot of fence to replace. We don't have privacy fencing; we put up some wire cattle fencing and I thought that cost enough.

So glad you will be getting your teeth soon. Definitely better for your photo, lol. Forthy years. I use to think it was only old people who were celebrating that anniversary. My parents didn't make it to 30 (my mom died) but now that we are heading for our 39th this year I know it's actually young folk like you and us! Gosh, where do the years go?

Hi Carol,
We had snow, too! I sat at my window and watched it fall on the daffodils and tulips across the way - it was a beautiful snow here - big, fluffy flakes! It didn't stay long.

Be sure to share your flower photos when you get everything planted!

Congrats on the milestone :)

I love daffodils--in a way they brought my husband and me together (one of these days I'll tell you the story of those...) but the ranunculus are gorgeous too!
I wish I had a back yard... a front yard... a green vegetable yard... any kind of yard! But the window sills and the balcony have to do for now :)
40 years is a lifetime! That is wonderfull, Carol :)
Lots of love,
Teresa