I guess I have always known New Zealand was near Australia.  At least I knew it since 9th grade Geography Class.  I always loved Geography. But I never heard of Christchurch.  Then one of my blog friends moved there from England, if I remember correctly.

In the last few years she has shared on her blog things that interest her, just like we all do. But she has also opened a window to parts of her life in a new country. I have enjoyed her thoughts, pictures and a vid or two and gone a step farther to investigate through the Internet some of the places she has visited.

I sent an e-mail and waited for the reply that she is safe.
My reply was there when I woke up today. She and her husband are OK.  There was some damage to their home, but not as much as properties near the epicenter.

Our beloved former Indiana governor and Senator and his wife were in Christchurch for a conference.  They are also safe.

I am grateful for so many things this morning, but my focus today is Christchurch.
I am grateful for my friends safety and pray for those lost and missing.
Please bring peace to this Earth.
Posted by Carol- Beads and Birds at 6:32 AM 12 comments:

I Found The Answer 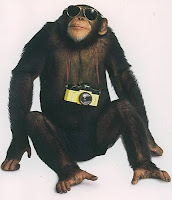 Don't you love this guy!  I just can't post without a pic!

So, Indiana must have some law now that says when the temps dip to a certain degree schools will be on a two hour delay.  Since it was below zero this morning and will be for the next two mornings, I guess I will gain two extra hours at home so that I can taxi the kids to school.  Nice.  Yes, I enjoy the extra time.  BUT, and there ususally IS a but...it throws us off schedule in the AM.

So this morning Corey was taking just a little too long to get his Prima Donna butt in gear.  I said " Hey Corey.  Its getting a little late."  His typical reply was "O God".  Before I thought about it, I replied "Don't call me God, because if I was God I'd make it 90 degrees outside".  I waited, listening for a wise crack reply.  Silence.  Do you think I found the perfect response?  Well, I think I did.  I'm gonna try it again the next time I get the OG whine.  I'll let you know if I'm good until they think of the next come-back ~lol~.

Have a great day...Spring is just around the corner...now tell me someone...which corner!
Posted by Carol- Beads and Birds at 12:18 PM 15 comments: 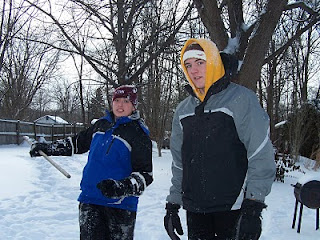 Doesn't look like a lot of snow, does it?  Well, it's been snowing every day and this just happens to be an area that the snow drifted OUT of.
For some reason the boys wanted to go out and play in the snow.  They got the idea that they were going to take the tractor and push snow into a larger pile and build an igloo.
I was in the kitchen when I heard
"kill the Caribou".
What the heck did THAT mean. 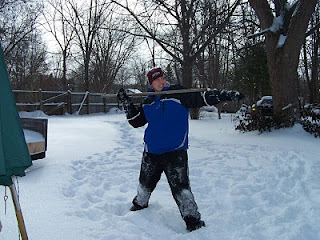 It meant that Ky was going to slay something. 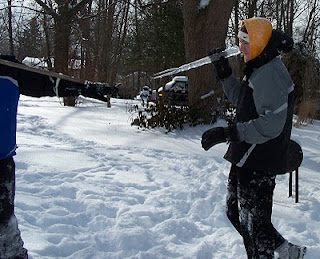 But the "Caribou" proclaimed that he could not be taken and found his weapon.
So much for the igloo.
They want to be young men one moment and play like boys the next. 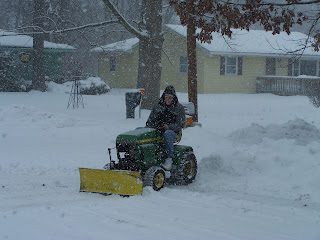 But they always accept the responsibilities of helping with work that needs to be done. 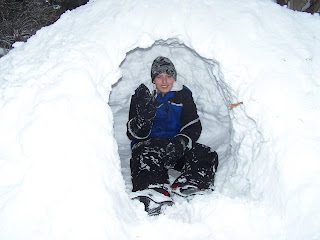 But they are still boys at heart! 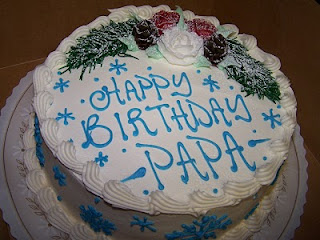 Incidentally, Terry had a birthday recently. I went to the only best place in Elkhart Indiana to buy him the best cake in town.  They are not cheap, but worth EVERY cent and decorated beautifully.  I have never before seen a cake decorated with chocolate pine cones and pine needles.  White cake with custard filling.  The icing tasted like the whipped milnut frosting I used to make 30+ years ago. It was a nice day spent with good friends and family.
Posted by Carol- Beads and Birds at 8:52 PM 13 comments: