Lots of people are choosing their "WORD" to focus on this year.  I haven't given that much thought until today.  I have been sorting out why I had withdrawn last year from blogging.  From showing projects I was working on.  From sharing that I was even BEING creative.  Then, I kind of went through a period of the dumps at Christmas.  Not like me at all.  All really started on the same day.

I got to thinking back to when it did start. A comment made about a profile picture and comment in my status line on FB was the culprit.  My "friend" does not have a clue and I would never let on.  I no longer post on FB. That's OK, not crazy about the place anyway, though I do like some games.

So why the pic of Snoopy doin the Happy Dance on New Year?  Because this is STILL a new year.  Because I LOVE Snoopy.  Not so much the comic characters that accompany him...I LOVE Snoopy and all his alter egos. So I am joining Snoopy in the Happy Dance and my word for 2011 is INHIBITION.  I will post my work to share with anyone that visits and its gonna be Happy Work cause I'm over the insecurity that I let one person wash over me.
Posted by Carol- Beads and Birds at 8:13 PM 16 comments

﻿
If you don't live on the east to south east side of a Great Lake, then you probably don't know about Lake Effect Snow. It happens when the arctic air blows across the warm lake water, picks up moisture, turns it to snow and dumps it wherever it happens to dump it.  Its not selective and there is no way to know from one MOMENT to the next which way its headed. It happened in Laporte County Indiana a couple of weeks ago when they received 3 feet of snow in the southern most  section of the county.
Saturday morning, Corey had to be at the high school at 6:15 to board the bus to head to South Bend for a  wrestling meet.  The news hadn't come on yet when we left.  We had snow, but since my Element is an all wheel drive, I don't notice how bad the roads are sometimes.  The plan was to get Cor to school, breakfast at our favorite diner, then on to the grocery store.  By the time we got to the store, we received a call to pick Corey up at school in 1/2 hour.  The meet was cancelled due to snow.  We didn't question it then because phone reception was bad in the store. 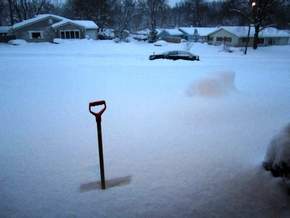 Early Saturday morning as it started to get light out.  Look how serene it is.  You can see how much snow fell since about midnight to about 8:00 in the morning.  Doesn't look to serious, huh.  When we picked Corey up, he told us that the snow in South Bend was about up to his waist, (he is 6'3").  He has a friend from Indonesia that wasn't too happy to be thrown in the snow.  Corey couldn't even see him when he heard Joe yell that he was going to kill him for that! Then all the boys started pushing stuck cars out of snow drifts.  They even pushed the school bus from Plymouth High School out!  And the snow was still coming down.

How's THIS for moving snow?? That's a CAR they are digging out!!

No, I wasn't lucky enough to stay in and work on my January  BJP.  We have responsibilities in this weather to those we care for.  And Terry has to be at work to clear walks.  Since they have not yet found his replacement, I went to work with him.  I didn't want him to be at work alone.  Course, one of our side kicks was with us too!

And Maire, when you read this....most businesses were closed due to the mayor calling a State of Emergency, which means unless you are on the road for an emergency, you will be ticketed.

This all set a new record.  The snowfall beats our comparison...the Blizzard of '78!, which was worse, but only because in '78 the winds blew drifts 15' high.

Is It A Promotion or Lateral Move??

That was the question.

On Monday when I return to work, I will be the manager of the shipping department. Its a newly created position. It means more responsibility in one regard.  But it also takes away other responsibilities.  That's the lateral part.  Managing the department.  That's the promotion part.  I could have said no.  Since this is part of a restructuring of responsibilities of a couple people, it would not have been offered to someone else.  The changes would have just been structured differently.  But, if there is a sign that the economy is improving, evidence of it may very well be seen in the company where I work.  We have grown and my job has become more than one person has time to do.  Its going to be different.  Less stress. But managing someone else's time will be a challenge that I haven't had to deal with for at least 10 years.  Did I tell you that a new shipping person starts Monday too?  Training a new person will be a challenge too.

My friend Maire Dodd posted about keeping an open heart.  She always seems to give me a reminder just when I need it.

So lateral move or promotion.  No matter.  Its another area of my life where I am going to have to learn to ...delegate.
Posted by Carol- Beads and Birds at 3:00 AM 15 comments 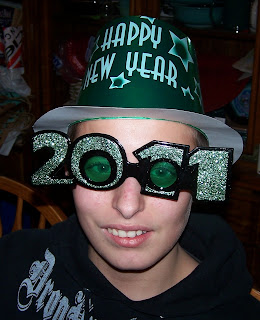 How did  YOU spend New Years Eve?

This is my youngest grandson. We decided to stay in New Years Eve with the kids and their friends and play cards. Ky is our resident comedian.  He also LOVES hats and has one for every occasion ~ and the collection continues to grow.

We were playing Tripoly.  If you don't know the game, our version starts off with a round of poker.  When Ky sat down to his place at the table we all roared when he told us this was his Poker Face.

We all had a great time and laughed more than we have in a long time.  We had plenty to eat  and  great music.  Our neighbors provided plenty of fireworks and big boomers at the stroke of midnight.


The kids are still talking about what a great time everyone had.  I think we can expect plenty more card nights in our future.

Posted by Carol- Beads and Birds at 3:01 PM 5 comments