Are You A Magnet? 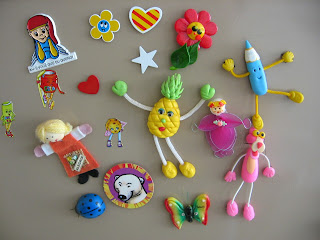 When the movie "Pretty Woman" came out, there was a line about how she called herself a "Bum Magnet".  That became our name for someone who shall remain nameless.

Terry tells me I'm a Weird magnet.  This is the kind of stuff that happens to me.

Terry and I were in line at Walmart.  I'm sure it was apparent that we were together.  The older gentleman in front of me in line turns to look at me and says "O my gosh, your Aura is the brightest most beautiful blue I have ever seen".  I'm a pretty friendly person so I smiled and asked if that was good.  He touched my arm, which I quickly pulled back, looked him straight in the eye and told him I didn't like to be touched by strangers. (I didn't look at Terry but I am sure he was at attention).  Anyway, he apoligized if he offended me.  He then proceeded to explain that he could read people and because of my Aura he wanted to feel my energy.  (Well yeah, I'm sure!)  Then he tells me that my Aura tells him that I am at peace with myself.  I have an inner serenity. (Hmmm, I'm thinkin he never saw my temper...yet).  Then he tells me that when he touched my arm he got a sense that I was a very giving person.  That I will work with anyone that goes at least part of the way, and that I am the kind of person that will take only so much before I would cut you down with only a look. (Do you think I gave him the "Look" and didn't know it?)  He then told me that he didn't know what my job is, but it is a position of  a lot of responsiblilty.  I told him I buy steel. He said that made sense (?) and that I have what it takes to barter a good deal.  I asked what he did...he sells houses.  He says he just has this knack of knowing about people.  I told him that actually, he did pretty well.  Then I asked what he knew about Terry.  He told me he couldn't read him very well, but he did know that when he gets made, his eyes turn black.  Even though science says that doesn't happen, Terry is one of the few people that it did.  Well, THAT was true.  Its something that our whole family talks about.

Sometime I'll tell you about some of he other "weirds" I have encountered.
Are you a magnet?
What do you attract?
Posted by Carol- Beads and Birds at 6:55 AM

Ok yes that was a weird encounter! Although what I think is weirder is that he was pretty good with his read. You must be like me and smile at everyone you see. That tends to attract weird. The thing with Terry is kinda spooky.

i don't think i'm a magnet except for dust bunnies maybe. i'm pretty antisocial and i think my energy says "stay away!" lol to be honest, i can't think of one single encounter of note i've had with anybody in a very long time. i think this is a good thing...especially after hearing about your weird guy! lol thank goodness for the internet where i can have a few friends!

It's interesting that he did pretty well with his take on you. He must find that his ability serves him well in the real estate biz.

Since I didn't see him, it's hard for me to decide if he was weird or just different, but I don't rule anything out when it comes sensitive people. Who knows what abilities we all might have if we allowed ourselves to express them. That being said, we do need to watch out for the "nuts". Glad you had your knight in shining armor with ya.
:-) xo

I attract the talkers...probably because I like to hear peoples' stories, I hear a lot of them.

That is very strange indeed Carol! My family actually calls me a dog magnet! Wherever I am, if there is a loose dog and no one can catch it, I can! They seem to be drawn to me for some reason. When I went to look at maddux the first time (at 4 weeks of age) even though my husband and kids were there too, it ended up with me on the floor and all 6 puppies laying on me or next to me all sleeping. Everyone else was on the floor as well, but they were all plastered next to me. I would rather be a dog magnet than a weird magney any day! Ive missed you! Hope all is well.

I used to have to go to the laundromat to do laundry (naturally *smile*) and oh boy!! There you are, a captive prisoner of Tide and quarters - trapped by whoever happens to walk in the door. I found myself curling inward pretending like the book I was reading was the most important thing in the world! I really learned to cocoon to the sound of the laundromat door opening!

What if he was sent to you with a message? What if he did have some uncanny ability and needed to touch you to get a clearer picture? I love that he thought you were in a position of a lot of responsibility and I thought of you raising your grandsons...I don't know...a true weirdo meaning to do you harm isn't likely to do it in line at the grocery store.

Hmm....I'm a magnet for people who have depression, including my husband. I think it's that way on purpose. I have enough endorphins to anti-depress a whole neighborhood, which I believe, is a gift. And It's my job to share it.

I happen to agree with the weirdo...you have an amazing aura...shine on!

My sister insists she sees those auras. I can't and don't know if people really can but so many things are possible. But we each have personal space and he crossed it without permission. That's a no-no and if anything, that is what made him "weird".

I don't know that I am a magnet for anything. I have an "aura" of a type that tells most people to give me my space. I can also be very friendly though as long as people don't cross that personal space line! I'd have given that man the "look" also for touching my arm!

The word verification for me is: medlings! People shouldn't meddle when not asked, eh?

I do have to agree, you have responsibility with your grandkids who are living with you and that is bigger than any you could have at work.

I seem to be a magnet for the attention starved or maybe I am just too polite.
I end up in half hour conversations with perfect strangers where ever I go.
it doesn't happen all the time but it happens with enough regularity that friends notice and will come to the "rescue" if It goes on to long!
I have had some very interesting conversations in the checkout though.

It means you are an open, friendly, approachable person, it is a gift,even though it attracts the oddballs and weirding ones of society it makes life an interesting place.

That's a great story! I like that you were so clear about telling him no touching. It would have made me uncomfortable but I probably wouldn't have said anything.

I seem to be a magnet for jerky men. I think I'd prefer to be attracting money!

I'm a weird magnet too! Have many stories... I had a woman tell me I had a strong rainbow aura. I said...'er thanks' – well what DO you say? I have to admit that the cynic in me expected her to try to sell me something :o/

On another occasion I had someone who wanted to feel my aura (and I admit I was at a psychic fare - so what did I expect?) and, like you, I told her no touching. But more than that I wouldn't let her near my crown chakra. I'm funny that way - I didn't know her from Adam, after all!

All these weird encounters - it sure makes life interesting ;o)

P.S> I wonder if the guy's gift helps him sell houses? He knows what people will like?

Interesting story, I attract "talkers", am a good listener, but I have learned that lately I need to shut it down, I need most of my energy for myself anymore.

I have given a lot of my energy away in the past, anymore I now I have save "more for me".

Hoping that all is going well for you in the healing area, your new smile I am sure is a "knockout" good one :-).

I don't think I'm a magnet. But wow, what a very weird encounter you had. I would like to know if he does that all the time, or if you just compelled him to be so forward.