I Got A Rep To Protect!!

Just to give you a little background here, let me tell you something I LOVE to do.
Years ago, when I did a lot of cake decorating, when someone at work had a birthday or other special occasion, I used to make them a cake that was symbolic of what they liked.  A pool for the swimmer, a sunny beach for the sun worshiper...you get the idea.  That all got to be too time consuming.

But it did evolve into something else that is tons of fun.  The ower and President, John, looks forward to it.  Is even disappointed if I don't come through.  Once when he went on vacation, our plant supervisor brought his 2 year old son into the office.  We took all kinds of pictures of him then posted them on a board with cute captions...you know like because the boss likes to leave early,  one caption said something about gotta run to beat the 2:30  traffic.  Another time I got that fake cobweb stuff and covered his door.  You get the idea.  We have a relatively new plant manager, CJ, who just happens to be John's son-in-law. Last week he went on vacation with his father to Canada.  CJ's father was going bear hunting, but CJ swore to me HE was only going to fish.

Everyone knows I love animals. Since deer around here are totally over-populated I can ALMOST understand deer hunting season.  But Bear!  No Way!!  Well I just couldn't let this one go by.

CJ had to be initiated into my Hall Of Fame.


I gathered my favorite bear. 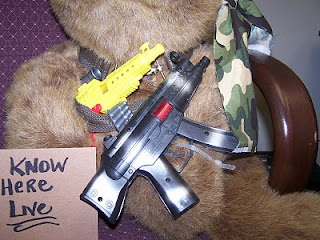 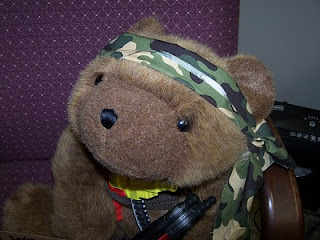 Dressed him to the nines! 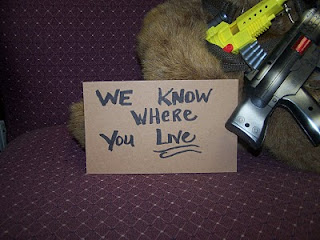 Gave him the warning!! 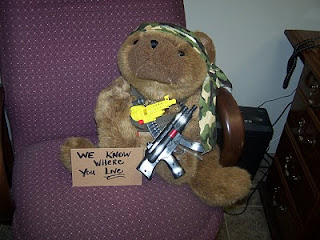 I think he'll get the message!!
Posted by Carol- Beads and Birds at 8:38 PM

LOL...you know, I once "kidnapped" all of the beanie bears that one of our school counselors had... "tied" them all to his chair, with a note "HELP" and took a picture of it. I hid the beanie bears, and left the photo with a ransom note hanging from his ceiling.

I'm pretty sure doing things like this is what caused such a marvelous birthday party for me this year... Payback really is a bear!!!

That's great! I used to decorate cakes also. All that work and people just ate them.. . I liked your old picture but this new one is nice too. Where's it from?

I got the word. My prayer to the Universe was answered.

The bears in Canada were safe last week.

My father used to tell the kids next door who went hunting with their dad to hunt the animals with a camera instead of a gun. They finally took him up on his advice. If the thrill of the hunt is in the stalking and "getting" then a camera should be just as good as the gun and those of us who don't like hunting will enjoy it for a change. Glad he didn't get a bear. Yours is cute.

I'm surprised you didn't get in trouble for bringing guns to work. I read of one kid who got expelled for having a tiny plastic toy soldier (holding a gun of course) on a hat he made to honor the soldiers when the school had a hat decorating contest!

I agree that your new "about me" picture is gorgeous - very vintage Hollywood!

Leave it to you to be the company's creative touch of humor! :-)

And you made cakes? I'll bet they miss that at work.

I think you're in a very creative and fun mode right now!!!

How fun! LOL! Glad the bears were safe. Fun "pranks" like that are what make the work environment better... well as long as no one is being a stick-in-the-mud anyway! Love the new pic too, although I liked being able to see you :)

Carol that's wonderful!!
I have a confession to make I once "stole my neighbors lighted reindeer and took it on an adventure through the neighborhood.
that reindeer did some naughty things that christmas!)

That's a riot! And why am I not surprised that you did this?

Reminds me when I was younger and would relish April Fool's day....I have a few stories where I got my hubby good n proper (and a few where I was the fool - so gullible!)

LOL!! this is hysterical.

Off to watch Bond movies over again.

It seems like you give yourself to every community you're a part of...you are a gift. I know it's a mushy thing to say on an otherwise funny post. Way to light up your work life! And I love Terry's new toy too...

Oh Carol, you are just too funny! I would have been right there with you on this one. I love all the critters too, and can't stomach hunting of any kind. xo Paulette