What was I blogging about a year ago?  Well, since I live for summer and working in the yard...you guessed it....our yard.  More specifically, our pond. 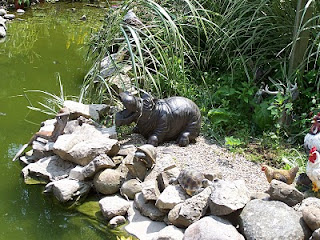 Terry and I have different ideas on how the landscape should look in the pond area. But, as in most cases, we put our heads together and just make it happen. Terry likes little "things" that decorate the area. Me, not so much.

Let me show you his pond chotch-chees. He has had his eye on this hippo for a LONG time. Yesterday the hippo found his new home. Doesn't he look happy!! 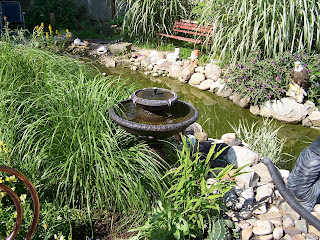 This is a solar powered bird bath that my sister gave us.  I know it seems silly to put it next to the pond, but we thought it would be safer in the back yard.  Just a couple of weeks ago, we were sitting by the pond watching baby house wrens leave their nest for the first time.  They would fly out and over to the bird bath.  We were scared they would fall in the water and not know how to get out.  It was the sweetest moment.  While we waited patiently to see how many chicks there were, one by one they flew out.  One of the birds on the bottom wanted out really badly and actually shoved the hestitater right out the door. We watched 5 babies try their wings that day. 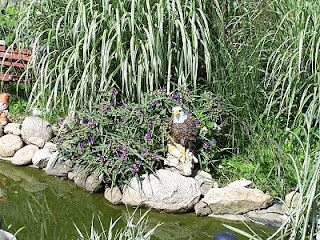 You know I love hawks.  Well, Terry does too, but he loves bald eagles more.  No, this isn't a real bird.  But let me tell you that Terry called me a week ago on his way to work.  He had actually seen a bald eagle fly in front of his truck headed in the direction of the river.  We have had some articles in the newspaper that there have been sightings of a bald eagle near the St. Joseph River.  Since we live two blocks from the river and near a bay, its believable that he did actually see one.  How cool is that!!
Let me also mention that THIS bird is sitting in the middle of one of my favorite flowers by the pond...Spider Wort.  I love it.  The flowers open in the sun and close in the evening.  It is a beautiful shade of purple and blooms all summer long.  And it SPREADS!!!

Here is another new addition to the pond decor.  Terry found this clock at Hobby Lobby.  He had a good idea.  Usually when I am working near the pond, I have no clue what time it is except a wild guess based on the position of the sun. 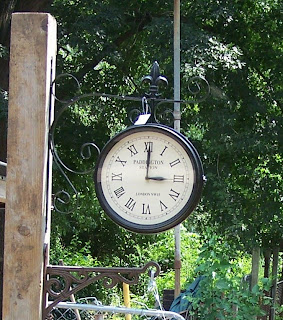 Terry's Goldfish, Koi and Shibunkin.  You can't see any in this picture, but there are about a trazillion baby fish in the pond. They are all sizes and ages.  Terry spends a lot of time gazing at them and trying to figure out what bread they are. 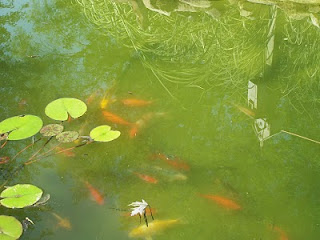 This is a little spot by the fence where I removed the grass and planted a few new perennials. I was putting the grass in a bucket then taking it to the compost pile.  When I went to move to another area, I misplaced my claw hand rake.  I swore I didn't throw it out with the grass. 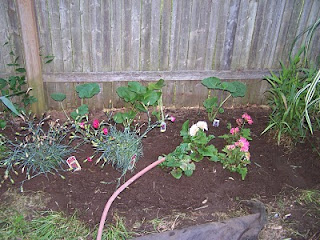 When Terry disappeared in the house, I had no idea why.  Here he came with metal detector and scrounged around until he found them. 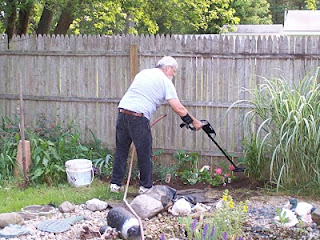 IN THE COMPOST PILE!!
Terry is my hero,  ALWAYS. 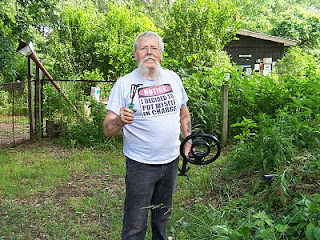 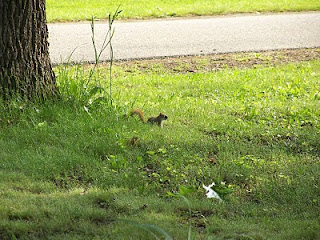 The tree in the front yard next door has always and every year been home to litters of baby squirrels.  This is one of a four 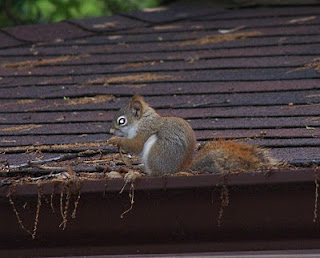 of the latest litter.  Its been great fun watching them run around and play.  This picture  is one of the babies helping to clean the maple tree whirlygigs out of the eaves of the garage.   Good Boy!!  And the last picture is of  some of my Black Eyed Susans.  They usually grow about 3 feet tall.  We have had so much rain, they are over my head.  Most of the other bushes have grown just as well and are higher than usual. 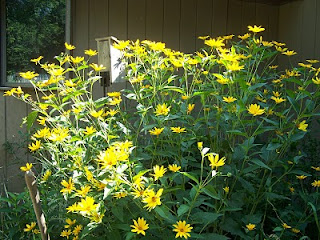 So, now you see why I am not posting beading, or sewing or any other project.   They are in the works, but not complete.  But they will be!
Posted by Carol- Beads and Birds at 11:52 PM

The pond is gorgeous. It makes me want to run out and buy some ceramic frogs to paint and send to you. I painted Dave some and they aren't painted like real frogs, but like TOXIC frogs. Dave loves them. Dave isn't the gardener in the family, I am so our flowers have dwindled with me being ill. If I had my way, we would have gardens everywhere instead of grass. I have a cardinal nest outside the living room window. I can't wait to see the babies. The momma bird is skittish and flies away every time I walk up to the window and move the curtain. Poor thing. I wish she would get used to me. I have had to have the girls chase the neighbors cats away to keep her safe.

Again, love the pond and the decorations.

what a wonderful garden! the little chotchkies add a little character to the yard! I'm going to have to try that purple plant you mentioned..I need a ground cover in my back area. I had to chuckle when Terry got out his metal detector...boy was that ever handy...I might have to get one of those too! lol...take care and thanks for sharing..

what a terrific visit to your garden, i really enjoyed dropping in to vist. Next time you might like to offer a cuppa tho, i needed it i was here for so long.
The very best thing - Terry's t-shirt! i enlarged it so i made sure that it read what i thought it did. tatah, kaite

carol, it was so nice and relaxing to look at and read about your pond and garden. i can only dream of having such a tranquil space in my yard. i think you are a very lucky girl. our yard is nothing but a big space of dead, dried scrub, baked by the arizona sun. i envy you with such a beautiful area! i know you do, but keep enjoying it, my friend.

Marriage is so full of compromises! My husband and I always have opposite viewpoints. Sometimes we can compromise but usually one or the other just does a project their way. Great pics of the yard and how sweet of him to take care of you with the clock and finding your claw for you. The clock may not give the look you want but it is still a sweet thing for him to do.

Thank you for the wonderful garden tour! We are still jealous of your pond and koi!
Yes...beading, etc. will keep, but around here we go out when the sun shines!

Your pond is beautiful - a great place to meditate! I love all the treasures that you've surrounded it with. A perfect place to enjoy summer!

Oh Carol!
Talk about a little bit of heaven right here on earth! It's all gorgeous!

Everything looks so tranquil and inviting. And, I must agree that Terry's t-shirt is too cool!

Now, why am I *not* surprised that he set up the clock for you, and found your little rake? ;-)


So glad you are having such a sweet summer,

Hi Carol! I remember when you posted about your guys digging the pond! It's just beautiful!! Oh, how I'd love a pond like yours! All of those little decorations are charming, and your flowers are so lovely. I can see why you want to play outside all day...it's like your own special paradise!
xo Paulette ;)

with a pond/yard like that - the beading can wait! enjoy the warm weather, and all of your feathered, furry and finned friends!

Makes me yearn for summer! And a pond. No chance at the moment - though I am compensated by the sea at the front. That clock is great - and a really good idea. I always lose track of time when I'm gardening. It is so blissful to be among the plants and pottering about in the garden isn't it? Feeds the soul.

Beautiful pond. You must have many happy hours there. I love to watch all animals too. We have lots of hawks. Thanks for commenting on my blog.

Lovely garden and pond! I really enjoyed seeing it.

Way to go Terry! What a great idea to use the metal detector.

Carol, I love your yard. Thanks so much for giving us a peek into your world.

What a beautiful yard Carol. It must be so wonderful to sit out there and relax too!!
Peaceful!
I love Terry's shirt, too funny!!
I hope you both had a wonderful weekend and have a great week!!

Thanks for visiting my blog!
I love your pond and am green with too much grass;)

Just smiling...I *LOVE* this post! Your pond, a year later, is amazing. You guys have done a beautiful job! I sure hear you on living for summer and working in the yard...when the sunshine is out, we are there. Our yard and garden are peace and art in itself...aren't they?! ;-)

Oh, the babies leaving the nest for the first time...we have not been fortunate enough to see babies try their wings! We would *love* to see that...the *sweetest moment* is right!! Have seen babies, but never their first flight!

OMG, bald eagles...incredible they are!! How cool that an eagle crossed paths with Terry on his way to work and that they are near. You won't believe my email!

Your spiderwort is beautiful...I have them in my yard too! Purple, fuschia, lavender and white. Mine are about 15-18 yrs old. Mine get top heavy and I have to wack them back in mid-summer, but they come around and put on one more show. Mine are growing with white japanese anemones and ferns, but they look great with white or purple irises and hostas too. Black eyed susans...one of my most favorites! I have mine planted with purple coneflowers and I bet you'd like the combo too!

Love the hippo, the fish, the solar birdbath, Terry's shirt, his smart mind to find the claw and the clock...sweet! Like you, I guess what time it is per the sun and I'm pretty close *most* of the time, but usually I'm behind what time it truly is! To have a clock near would be great, it's just so easy to lose track of time.

And the squirrels...oh, I just love them! They are so fun to watch! Cute snaps!!!

Thank you for sharing your favorite spaces at home...I loved visiting! XOXO ~Lisa