Winter at the Frog Pond 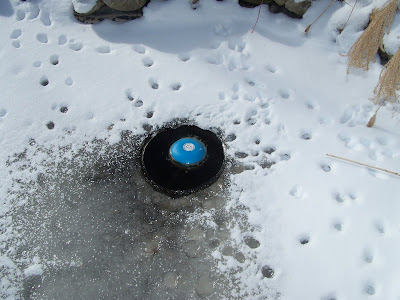 If you follow my blog, you may remember that we built a fish/frog pond in our bird haven.  We have tons of frogs and have added lots of fish.  We started with everyday minnows from the bait shop.  Then Terry added a few gold fish, then a few BIGGER gold fish.  Finally he bought several Japanese fish. They are not Koi and look more like a goldfish than a carp.

When Terry designed the pond, he wanted to have one end deeper than 3 feet.  He had read that if it was, his fish would live through the winter.  Just to be on the safe side, he bought a horse trough water heater to keep an air supply to the water.  I didn't know what to expect, but its only supposed to cost about $7 a month to run.  My motto is if its reasonable and Terry is happy, well, that's good enough for me.


So as you can see, it heats just a small area around it to keep the ice from forming.  You will also notice that there are little foot tracks up to the thaw so we know that the squirrels and cats have visited.  We also see birds venture down to the water for a drink. 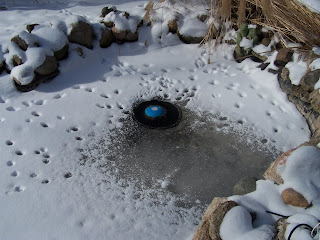 It is 14 degrees today.  Last week it reached 48.  I suggested to Terry to throw a little feed in the water, since the pond had thawed....Nothing.
Then later in the day, there they were.  The fish had come to the top for the food.
Its all good!

As I read this I became a little anxious for your fishies, but admire you for the care you have taken to assure your creatures are safe. A happy ending...so glad the fish surfaced. That is just cool!

How wonderful for Terry...and you. I am sure the wildlife are happy with Terry's heater...lol

Good for Terry... tell him I said so too... those little feet are so cute.

Wow! Isn't Mother Nature amazing? Of course I realize she had a helping hand from Terry in this case! :-)

But I've always been fascinated by the hibernation and then the reemergence of animals and insects.

I know you can't wait for Spring, Sis. It looks as if the fish can hardly wait to see you too! :-D

I can see why the animals love your yard. You do such a good job of remembering them in the harsh conditions. Those little feet marks are enough, aren't they? That's all you need...

Carol, I love animals and people who are good to them. I'm sure all the critters are thankful for everything you and your Terry do! xoxo

I enjoyed the story, thanks for sharing, kind of took me away from the winter blues.
Even though we do live in New Mexico during the winter months we do tend to spend more days inside....
"cabin fever"....ugh

So cool! I have always wanted to do this! Someday...
My sister had one going for awhile in NE. She originally started with goldfish in the horse tank to keep down the mosquitos. It was great fun to watch the colts play with the fish. Her pond with Koi turned out to be problematic, as they are yummy treats for racoons. We think anyways, it was so close to the house, herons seemed ruled out. Anyways expensive disappearing fish... I have a picture of a friends horse tank that looks like the eye of an elephant. I'll send it to you. This reminded me.