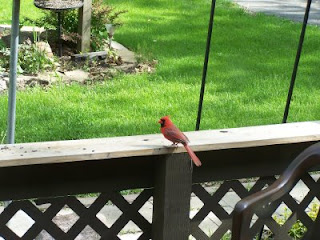 I used to have lots of different birds coming to my feeders. That was before the Bird Battles began. Remember I told you about the Grosbeaks coming and scaring off all the birds from the feeder. Well, that was nothing. I have two pair of Cardinals that make their home in or near my yard and come to the feeders everyday. One is Mr and Mrs Baldy. The other is a Cardinal that I call Guistopo.


The battle between the Cardinals started a month or so ago. First we noticed that a new Cardinal was coming to the feeders regularly and chasing all other birds away. Then he started coming to the picture window and pecking at it and flying up to it, fighting his reflection in the window. I didn't want him to hurt himself, so I put this guy in the window as a detourant. 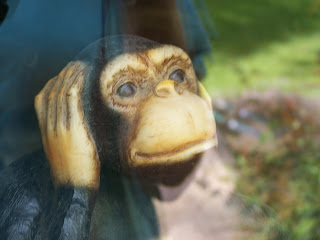 Nope, the monkey didn't scare him at all. Guistopo just kept flying up and pecking at his reflection. Then he would fly up in the tree and wait for another bird to come to the feeders so he could chase them off. Then he would fly to the back yard and peck at this yard Thing- a- Mabob. 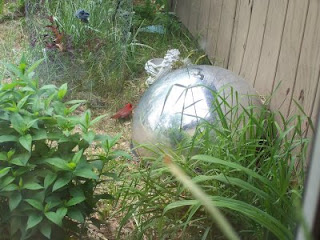 He would chase himself to the top, then slide off. I was worried that he would hurt himself on the house, so I moved the Thing-a-Mabob to the center of the yard. I heard a heck of a racket and there were two male Cardinals fighting themselves in their reflection and sliding back down. They must have come to an understanding, because now Mr Baldy is the only male Cardinal in my yard. 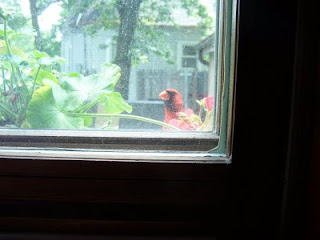 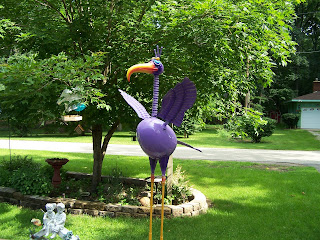 Sooooo, I put this guy on the table in front of the window looking out. He'd scare anyone away, don't you think? Not Mr. B.
He is still flying around, guarding his territory. I tried to get a picture of him fighting himself in the door mirror of my daughter's truck, but he would not stay.
So, needless to say, Mr. Baldy knows this is HIS yard and HIS feeders. The other birds have come back, no not the Cardinals....yet.
Posted by Carol- Beads and Birds at 7:34 PM

I couldn't help but laugh...LOVE the monkey and the *wonderful* and whimsical large bird! At least you tried multiple things.

Poor Mr. B and you too. It's so hard to watch them have a battle with themselves. Don't you wonder if they get headaches? ;-) We've had robins and juncos do it too, but not this year so far. But the woodpeckers are certainly drumming on the metal vents on the roof!

Your cardinals are so beautiful, wish we had them in Oregon! Thanks for sharing...~Lisa

We are having bird wars here too with the robins & FIONA! Fiona has caught 3 now & the birds are so mad at her. I know she's going to get pecked someday while she is out taking her consitutional. You'd never think a sluggish old Scottie could catch birds out of the air. Let's hope there is peace here soon before Fi gets hurt.

LOL! Get a dog. My little rat terriers scare EVERYTHING away but the hummingbirds and robins.

Oh Carol!
What a great post! So entertaining!!! :-D

And talk about creative - your ideas to try and stop the commotion were fabulous - even if they didn't give you the exact results you wanted.

I'll bet the boys get a kick out of all this! Who needs TV?

Love to read your blogs. Today I was laughing at your attempts to change the bird world. Hope they do not hurt each other just gain territory. Have not noticed that here...
Hugs
Deb in Fl

Well, they are called cardinals for a reason! I ALWAYS enjoy your bird battle posts!

Hey Carol! I love the fact that you take so much care in wildlife. I haven't met a lot of people who do care. I hope Mr. B dosen't scare ALL the birds away. But then again, if he didn't then it wouldn't be right. cardnals are known to get territorial.
By th way, I also wanted to thank u. Your comment on chapter 2 gave me a great idea for the next chapter in my book. THANKYOU!

I just LOVE reading about all the critters around your house, but this one takes the cake!

I had no idea cardinals were so territorial...the only bird wars we had were the hummers...boy, are they feisty!
I'd love to trade you some blue jays for your cardinals...we seem to have a dearth of red birds here in oregon...

Carol,
This is a riot! Maybe you could get a second job as a bird psychologist, figuring out what goes on in their little bird brains.
Marty S
Crackpot Beader

The cardinal is battling another cardinal in the reflection in the window and is quite common. It will continue until the decide to quit.

Usually a cardinal cannot dominate anything. I guess you must not have any blue jays or grackles. They almost always dominate the feeders.

How funny. Love the way you describe Mr. B. You should write some short stories of your bird escapades. It would make interesting reading.

I like the bird psychologist idea! Birds sure are territorial. My husband was convinced that the mama robin in the nest on our porch was staring at him to frighten him away, even though he was inside! And we couldn't use the porch until the 3 babies flew away, which they all did, in one day.

Have you thought of trying a replica owl instead of the flamingo? I have heard that it scares birds away. You can buy them in hardware stores I think. Silly Mr B!