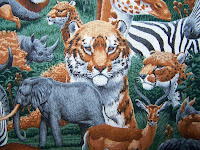 I am a slow starter when it comes to projects.
I have accepted the challenge to embellish a
pair of jeans with patches of fabric.
I have been going through my stash of fabric
looking for possibles. 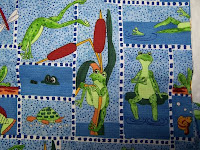 Maybe some frogs will appear.
I love frogs. 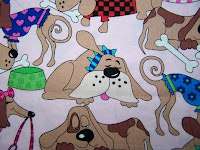 Dogs are a must.

This is my mantra
at work. 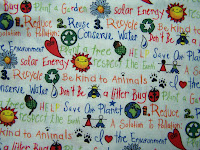 I'm checking to see what other
recycling fab I can find. Know I
have some. 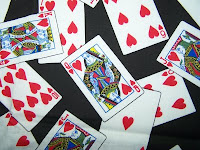 I like these pinks.
I have a Queen of Hearts tatoo
and I love Poker, so this is appropriate.

Young Men Will Be Boys 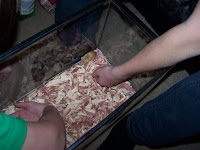 After much deliberation, my grandson finally decided that he would get a pet mouse. That kind of shocked me, because he wasn't too crazy about a field mouse that had found its way to his bedroom this fall.

Not only does a mouse need a house, he needs furniture too. This guy got a house that had a balcony for him to climb up on to keep watch. There was a Pringle can tunnel, and a tissue paper one too. Of course, there had to be a wheel. 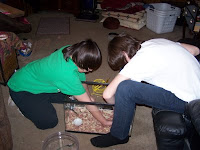 There was quite a bit of rearranging to be done.
It wasn't easy to catch him either. But they are determined that the mouse WILL be picked up. 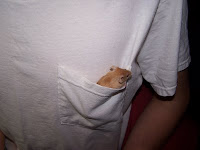 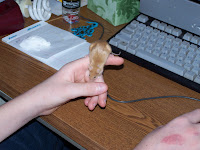 His name is Jerry.

Friends.
Posted by Carol- Beads and Birds at 12:00 PM 7 comments 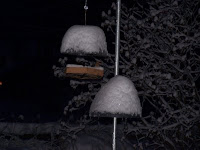 We have had just too much snow this year. Last week it snowed just about every day. On this particular morning, looking outside was just a beautiful sight. These pictures are dark, but this is what 7:00 AM looks like right now. (Though it is starting to get light earlier). If you click on the pictures they do get bigger so you get a better look.
Every morning when I leave for work, my cardinals are hanging out in the bushes, calling for me to replenish their seed. There is a female in this feeder. 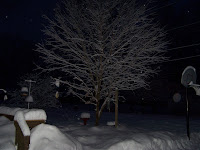 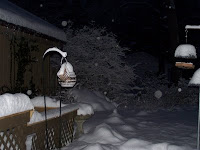 The tree on the left looked just like a Christmas card with new snow clinging to the branches.
And the weatherman is warning us... two snowstorms this week.
Posted by Carol- Beads and Birds at 12:00 PM 5 comments 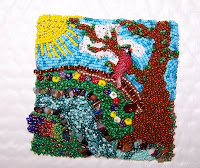 Well, I finally finished my December page.
I had bought Robin's book "Heart to Hands" and marveled over the techniques she describes. Take a look at it at her website. I decided to use my December page as a sampler, so to speak. I love the technique in the book for tree bark, so of course that was the first thing to bead. If you follow my blog, you know that I love to watch the birds come to the feeders in the tree in my front yard, so I think of this as a vision of "my" tree. Of course there is water, because we love our frog pond. And flowers because I plant them everywhere. The picture would not be complete without the sun and my beloved "Mr. Baldy" Hope you like this page, because I really do.
Posted by Carol- Beads and Birds at 8:38 PM 14 comments 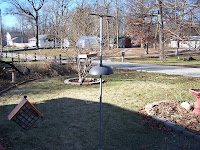 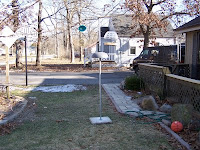 Well, here is the latest on that darn birdfeeder!
We decided that we would have to take the feeder out of the
tree. Terry put the feeder on a pole bolted to a 16 x 16
patio block and moved it to the grass between the tree and
the porch. He put a baffle on the pole. This pic was taken
during that nice little spurt of 60 degree weather we had
in December. He put the contraption in position and
came in the house to wait. He watched a squirrel scurry up
the tree, out on a branch and take a flying leap....missed!
Victory for our side!!! Wrong! That little rodent scurried back up the
tree for a second try....Victory again...but this time the
squirrel owns it. I think the score is now
Squirrels 2,000,000.....Terry zero, nil, nada, busted.
I laughed as I watched Terry go back out to the tree and
cut off the limb that the furry little guy had leaped from.
We watched and waited again. No squirrels in the feeder!
TAADAA....
Terry had beat the squirrel!
Wrong!
I was thinking about posting the victory on this
blog when I walked into the living room and
WHAT!!!!
a squirrel in the feeder.
Back to the drawing board.
We happened to be in Walmart yesterday when
Terry spotted live Christmas tree stands marked
down to $1.85. Two go in the cart, then 2 more
just in case. What in the world do we need these
for, I asked.
That birdfeeder pole of course.
Stay tuned for the next chapter.
Terry has an idea! 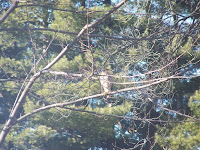 During that same bit of warm weather,
I caught this pic of the hawk that hangs
around our house.
Here he is in the tree outside my
kitchen window. He perched there,
watching me, watching him.
Posted by Carol- Beads and Birds at 12:00 PM 8 comments 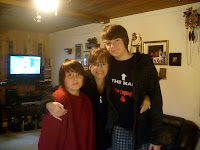 Well, this picture doesn't have ANY thing to do with the topic, but I can't post here without putting up a picture. So enjoy this one of me and my grandbrats. Yes, the one on the right is 13 and believe it or not, he's scootching down in this picture...and no, he doesn't play basketball. He plays defense football!
So anyway, I know you are asking what in the world is Do I Dress Like Joan Rivers/Joan Collins Phobia?!?!. Well, over the years as I have aged, I have read how women should dress at certain ages. One recent article was stressed that if you are over 50, you should not wear flared legged, close fitting jeans and definitely no embellishments!! Who, MOI? Well you betcha I am going to wear whatever I want, especially if its denim because I cannot live without denim!!
Now the part where Joan Rivers/Joan Collins come in is, IMHO, as they aged, they both dressed like they just walked out of the Jr. department. I never want to be thought of that way. BUT, the older I get, the less I worry about it.
So the real reason for this post is my blogging friend, Susan. Susan's blog is one of the best on the web and she is one very talented interesting person. I would like you to visit HER blog to see why I posted today....Ok, click here.....and treat yourself. Read older posts. Susan will hook you, then reel you in!!!
Posted by Carol- Beads and Birds at 12:49 PM 8 comments

And Yes I DO Believe in Global Warming!! 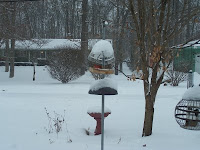 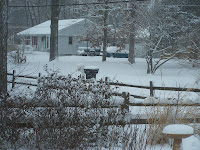 This is what we woke up to today.
It continued to snow all day. At times it came down at a rate of 1" per hour. By the time it stopped, we had a foot of snow. 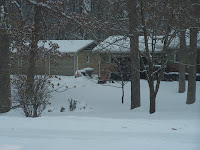 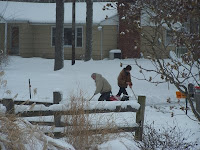 Terry and Corey worked off and on all day to clear the snow. Here they are working together to clear Katie and Harold's drive way. The snow blower quit working, so they shoveled together. 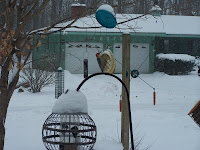 Terry made a path to the feeders to be sure they
were full all day. Click the pic for a closeup of my
Red-Headed Woodpecker eating suet. He lives in
a tree in the back yard. 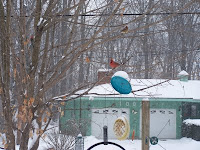 My cardinals can always be sure there will be
plenty of seed for them. We had 10 in the tree
one day this week. 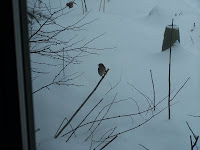 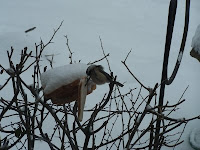 This little snow bird is waiting for bread. When it is snowing,
I like to toss whole slices of bread in the bush outside our
front window. The birds love to sit on a branch and dine. 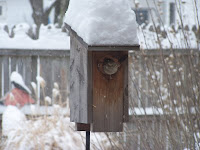 This little birdy has been seen here before!
She has claimed this birdhouse as her
place to roost this winter. Here she is
peeking out. I bet she is wondering if
its safe to come out. She is such a
pretty little bird. I love to watch her
from my kitchen window.
Posted by Carol- Beads and Birds at 11:51 PM 3 comments 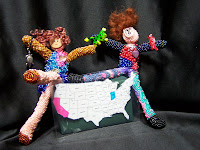 I have been introduced to the wonderful world of beaded art dolls and spirit dolls. I am hooked and am a proud member of the yahoo group BEADED ART DOLLS . These are the first dolls that I beaded. They are a tribute to my BFF Deb who lives in Southern California. I had a good time beading them, but I realized that if I am going to do more dolls, I am going to have to acquire some faces!

Years ago I dabbled in clay. At the time little creatures made of polymer clay were pretty popular. Classes in making clay figures seemed like a good way to spend quality time with my daughter, who was about 12 at the time.

So, off I go to find clay face molds. Well, making faces from molds went pretty well, but that certainly is not ME. 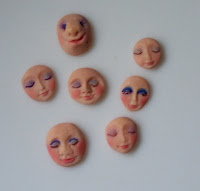 The face at the top is freeformed. That will be the direction I will go when making more faces. She will also be the face I use when creating my next beaded art doll for the "Spread the Love" challenge/swap for the Beaded Art Doll group. (I won't swap, but I am looking forward to making the doll.) This weekend I will design the body. I must remember to keep it small!

I am becoming more comfortable showing the beaded items I made, so I am sure that I will post a pic when she is done.

Thanks for visiting. Please come back.
Posted by Carol- Beads and Birds at 12:00 PM 9 comments

Handmade Presents are the Best

The best presents you can get are the ones that someone makes for you. My 11 yr old grandson made a windchime in shop class. So when he and grandpa went out to the workshop to make something, I thought it was a windchime. There were hints that the "something" was for me. I LOVE windchimes. Put 2 and 2 together and vualla....he is making me a windchime. Imagine my surprise when he brought out a birdhouse for me on Christmas Eve. I love it! Thank you Ky. It's one of the best presents I EVER got. 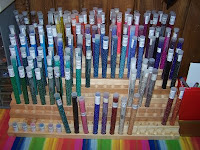 This was not a Christmas present. It is a "I saw that you needed another one of these" presents. The first one Terry made me was small. This one holds 209 tubes. How wonderful. Now my tubes are organized by color. I always tell him that I am the EASIEST person to find a present for. Thank you Terry, you are THE best and I will spend another 38 years with you!
Posted by Carol- Beads and Birds at 10:20 PM 7 comments