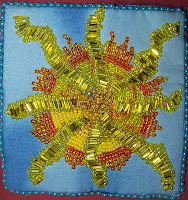 Well, like a lot of those who are participating in this project, I am behind. Most of the reason was that I couldn't even THINK of a subject to bead. November can sidetrack you with thoughts of...well...thanks. But before Thanksgiving comes Veterans Day. When I read that Obama chose General Eric Shinseki as head of Veteran Affairs, I felt hope. Not only hope for all Veterans, but hope for the entire country.

Well, with my theme settled on, how would I depict hope.

When I think back to the darkest times in my life. Those times of depression, sadness or feeling helpless, the one thing that always gave me a feeling of hope was a bright sunny day. 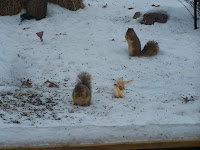 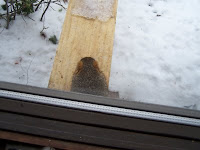 We thought that we would get up early on the day after Christmas to take advantage of the after Christmas sales at the mall. We woke up to "the morning after" a snow and ice storm. It was so icy we couldn't walk out the mail box to get the paper. We watched the neighbor's visitors try to drive up their driveway and couldn't make it. The visitors took wrapped presents out of the car and tried to slide them up the hill to the house. That WAS kind of funny. We watched cars and trucks slide sideways on the road or get stuck on ice. Where in the heck was it so important to go? So we sat back and watched more action than we usually see. My squirrels were looking pretty hungry so Terry threw a few ears of corn onto the ice so they could eat. But, they are accustomed to getting peanut butter sandwiches, so we had to oblige. You can see one sitting on the porch rail after I had fed him one by hand through the open window.
There was actually quite a lot of critter action on the road too. Terry called me to the window to see a coyote running down the road. Too fast for Terry to get a pic. We know they live in the woods across the highway, but I had never actually seen one before. I was pretty excited.
Later, while watching out the window I heard a bird chirping pretty loud. I watched as it flew by the picture window with a hawk in pursuit. I think the hawk won. 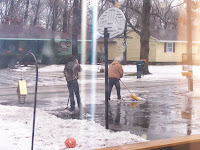 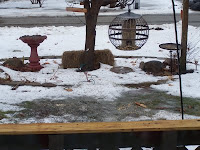 Here is the front yard and driveway on December 27. Terry and Corey are clearing the ice from the driveway, but you can see there is still quite a bit of snow. The next picture is just a few hours later when the snow is almost gone. The temp got to 62 degrees. 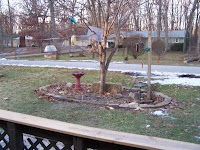 And this is December 28 and you can see the grass. We should be safe from snow for a couple of days. I am wondering if this is what we call the "January Thaw". Winter came a little early here and if this is the thaw, maybe that means spring will be early. Oh, I hope so.
For all of you that have commented and asked about my neighbor Katie, she is doing well. The Humane Society has taken the dog for quaranteen and we think they will not give it back. Katie is under doctor's care and has a home service come to change the bandages every couple of days. She is healing, but I am sure she will worry when she walks outside again.
Posted by Carol- Beads and Birds at 11:33 PM 4 comments 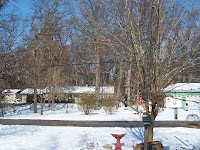 This is their home. They are the neighbors directly across the street from me. They are Harold and Katie and have been married for 65 years. We have lived across the street from them for 32 years. We have been neighborly friends. You know, we look out for each other's homes, making sure no strangers are lurking around. We get their mail when they are away. We know where they hide the key.
Today is Sunday. This morning Terry was in the back garage and heard a bad sound. He finally realized that someone was being attacked by a dog. He ran through the house telling me to call 911. Katie was being attacked by a dog. She was on the ground in her drive way. The dog ran off when Terry got there. Katie's neighbor that owns the dog, let it back into her house. I called Terry on his cell phone to give him the instructions the medic on my phone line was giving me to tell him. The ambulance was one the way. When I could, I went across the street. Katie was in the dining room with her leg up. Another neighbor who came to help was compressing the wound, as I had been instructed to tell him. Katie was shaking like a leaf. I held her, telling her all would be OK and an abulance was on the way. The paramedics came. When they started asking questions, Katie's husband was slow to answer. I felt compelled to tell the paramedic standing next to me that Harold had been a General in WWII. That he was a retired chemist from a local factory. I wanted him to understand that Harold was one of the smartest people I know. But sadly what we had been noticing over the last couple of years really hit home. For lack of another description, Katie and Harold were getting old.
It broke my heart when Katie told Harold "I am so glad this didn't happen to you". They have the same love, honor and respect for each other that Terry and I have for each other. That is the exact same thought I would have had this had happened to me. That's the kind of love that keeps people in love with each other after 65 years.
Posted by Carol- Beads and Birds at 11:53 AM 15 comments