The Latest additions to my Stash 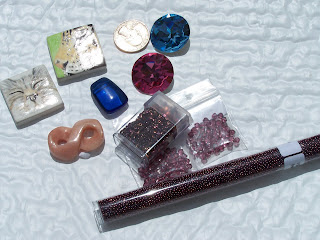 Well, I have posted this picture, but I wish it were displayed better here. I'll post it on my My Space page also, it might be brighter there. I am currently making a St. Petersburg chain necklace. this picture shows on the lower right, beads that I got from Cindy Tipton, http://www.beadlady.biz/ , who owns one of my favorite places to buy beads. I e-mailed Cindy and told her what I needed and acceptable colors and asked her to send me a set of bead and here there are. THE most beautiful shade of burgundy. I absolutely love them.

She also carries these kind of large swar rhinestons. These aren't Rivoli, the backs aren't pointed. We all just call them BIG HONKERS. Those of us who know Cindy, know exactly what we are talking about!

In the upper left hand corner are two pendants that were made especially for my by Valerie. Her web store is http://www.valeriebeads.com/ . There was a glare on the pendants, but they are of a happy cat and of course MY favorite cat, the leapord.

The other stones were bought at one of my LBS, Beads and Something More in Mishawaka, Indiana. I went to the shop to buy sterling clasps, and amazingly, they called to me from their nitch in one of the many piles of beads. The moment I saw them I had an inspiration of the piece of which they will star. Of course, now the search is on for just the right beads to accompany them!

Well, these are for future projects. I wanted to show off my treasures, and boast the talents of two of my favorite bead friends.
Posted by Carol- Beads and Birds at 3:21 PM No comments: 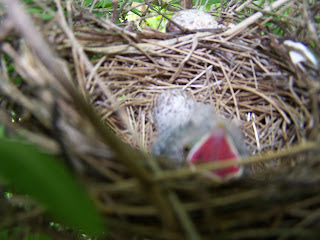 My friend, Deb, has nicknamed my cardinal Baldy so that is what we are calling him now, no disrespect intended! This morning, Baldy and Mrs. Baldy were outside my bedroom window "clicking" up a storm. I am referring to a sound cardinals make when they are alarmed. The racket was so incessant that I thought I should find out what was going on.

There is a rather small honeysuckle bush near our bedroom window. That seemed to be the spot where the ruckus was directed. It's near our privacy fence, and our neighbor's dog was barking near the fence. I thought that might be why the birds were upset, so I figured there must be a nest in the bush. I had my camera because I am starting to keep it near when I am outside. I have been trying to get a close up of the woodpeckers that live in one of our trees. Well, I spotted a nest in the honeysuckle and the pic above is Baldy and Mrs. Baldy's baby. Strange that there is only one. I looked around to see if any had fallen from the nest, but I couldn't find any lost in the ground cover. I said a prayer to St. Francis that this baby would survive.

Posted by Carol- Beads and Birds at 11:22 PM No comments:

Today We Saw The Baby Ducks

My daughter came to visit today. I heard her come in the back door shouting for me to hurry and come outside. When she got out of her truck in the driveway, she scared the mother duck and her babies from their hiding place. I hurried outside in time to see them scurrying across the neighbor's yard. They were so cute, waddling quickly out past their mother. I couldn't count them because the grass next door is high and they were quick. Terry got a picture, but you can barely see them in the grass and leaves. It was such a naturous sight. I don't think that's a word, except its a word that I made up. I use it when I am in awe and beyond words of a magnificent site of nature. Baby ducks born in my yard is NATUROUS.
Posted by Carol- Beads and Birds at 10:47 PM 2 comments:

Here Are Some Beads

Well, one of my bestest beady friends said "Where's the beads?" So, I am posting a picture of my first embroidered cuff. I absolutely love it. The picture doesn't do it justice.

I can't decide what the next project is. I have strung beads for years, but am now focusing on learning beadweave and perfecting bead embroidery techniques. Its not that easy to get those little beads to lay the way you want them too! I have never been a person to "practice". Its read the instructions, gather the necessary components and jump right in.
So, right now, the component part is the problem. I see a pattern, don't have the necessary beads, search the internet and wait for the postman! In the meantime, I have a good friend-use my link to * goodquillhunting*- who has supplied many tutorials on one of her sites. I know that I will find something there to learn while I wait for more beads.
Posted by Carol- Beads and Birds at 7:18 PM 4 comments: 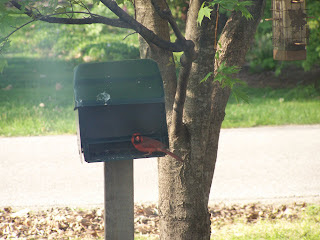 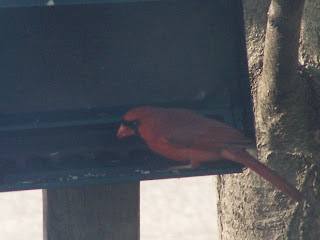 As always, I have a story to tell about the critters that frequent my yard.
This is the tree that sits in front of my picture window. It is 13 years old. I know that, because we planted it in the same month my oldest grandson was born. This is Corey's tree.
This guy is about 3 years old. He was young when I first noticed him. The feathers on his head were falling out and soon he was bald. I was concerned because winter was coming, and I wasn't sure how well he could withstand the cold with no feathers on his head! But, we watched him come and go all through the winter. He had the ugliest black head, with crinkley skin. I wish I had a digital camera then. Last year in the spring, he had black feathers on his head, though they were funny. Not fluffy, just kind of there and ugly. I didn't see him much all through the winter. But here he is back with a full head of red feathers, but he has no comb. This is the first year that he comes with a mate.
He comes to the feeder everyday about 4:30 - 5:00 PM. I'm not sure if he comes at other times, but he's always here for supper.
Posted by Carol- Beads and Birds at 9:36 PM 3 comments:

Vistors to my yard 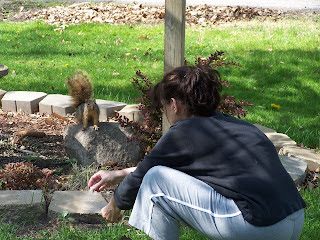 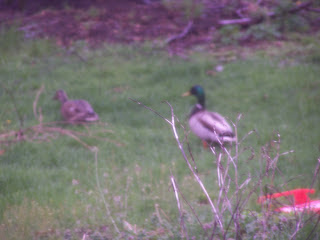 Anyone who knows me, knows that I revel in the visitors to my yard, and do whatever I can to attract a variety of birds and critters. We have created a section in the backyard that is still under contruction, that is a safe place for birds and critters. At least, safe from my dogs. The squirrels sit in the trees, or on the other side of the fence and shake their tails and click at the dogs.
I also have a tree in the front yard, that I can watch through the window, where I feed birds and squirrels. Some people get angry when the squirrels eat bird feed from the feeders. I can only laugh at the antics the squirrels go through to get whatever seed they can. I have a feeder with a perch on springs. Birds can eat, but the squirrel's weight closes access to seed. Also, tube feeders that the seed is enclosed in wire to keep squirrels out. But they still try, and if nothing else, they shake the seeds out so they can feed from the ground. I say there is enough for all.
O, woodpeckers also visit frequently. They nest in a tree in the back. I try to be sure there is nut suet in the tree in the front for them. Soon, we will be putting out the Hummingbird feeders. Then the fun really starts. (I'll post more on that later.)
Here are a couple of pictures we took recently. Not very good shots, but we'll bet better.
The pictures that I have posted here are of a pair of Mallard Ducks. We started a new pond last year and didn't get it finished. Terry put an old pool liner in for the winter to keep it from caving in. The ducks are enjoying the water that has collected in it from the winter thaw. The other picture is me feeding my friendly friend. She comes to get peanut butter sandwiches that she takes from my hand. She is either pregnant, or has had her young. I have found that in that situation, squirrels keep their distance a little, no matter how friendly they have been.
Posted by Carol- Beads and Birds at 7:25 PM No comments:

No Bluebirds This Year

Last year, I wanted to attract bluebirds to our yard. We had seen them in the area the year before, and once you see one, you want it to find a home in your yard. We got a couple of houses, a special feeder for meal worms and waited. Didn't take long. A pair made their home outside our kitchen window. After eating, often they would fly up to the kitchen window and hover and seem to look in at us as if to say thank you.

We waited and watched with such anticipation for the first brood. While out shopping on a Saturday morning, Terry called to tell me the babies were laying outside the house on the ground dead. English sparrows had killed the babies just after they hatched.

The pair tried again and again we had a brood. It was almost time for them to come out of the nest. I hadn't seen the parent for 2 days. Strange because they stay close to the nest. On the second morning I went out to check around an there outside the house were both parents. I could not tell what had killed them, perhaps wrens.

I didn't have the heart to attract another pair, and it was about the end of nesting season. I had Terry close off the houses so other birds (enemies) wouldn't use them.

This year, I still don't have the heart to attract the beautiful blues. We did open the houses because chickadees were trying to get in to use the nearest house. So, I have been watching a battle over the house. I see chicadees go in, or sparrows, or wrens. A cowbird is even trying to get in, but I think she is too big.

I want to think "a bird is a bird, let nature take its course" but its hard. Its hard to see other birds in my pretty little bluebird's home. Maybe I'll try next year. But for this year, I am taking great delight in the ducks that come to our water, though I'll be sorry when they eat my fish! And we have baby rabbits and dozens of different breeds of birds who come and go. My favorite time of the year has finally arrived.
Posted by Carol- Beads and Birds at 8:45 PM No comments: