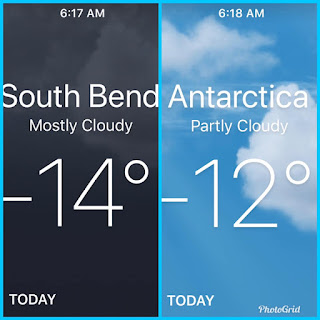 I know that just about everyone across the country is suffering from the current weather pattern.  I wanted to post about it really to document the temps for the day for future reference.  Our temp when I woke up was -16 and wind chill of - 44.  Minus 44.  I was watchng the weather channel.  Do you know what can happen at that wind chill?  If you are outside and don't blink your eyes your cornea will freeze.  Also, the post office will not be delivering mail.  I'm not sure about the newspaper, but I'll get it Saturday when it is supposed to be 50 degrees.  Brother

At 7AM Bosco wanted to go outside.  Max followed him to the door then backed up.  Bosco got his job done quickly and ran back in.  Later Harley wanted to go...NOT but I made him and that was fast too.

This is going to be a crazy dog day at my house.

Tell me what YOUR temps are.

Grateful:  Today I am totally grateful for electricity because our house has electric heat.
Posted by Carol- Beads and Birds at 9:35 AM 17 comments 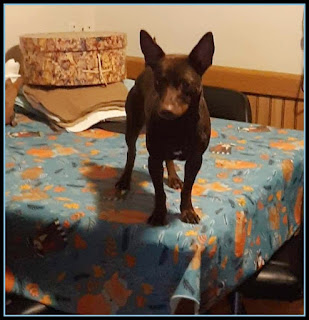 This is Max.  Jumping on the table is not allowed here and he is learning that quickly.

When Corey left, of course he took his little pooch Kiki with him.  Kiki had become great friends with both Bosco and Harley.  All three were playing all the time. When Kiki left, Harley began tormenting Bosco to play ALL THE TIME.  Mostly that meant Harley knipped at Bosco's ears, nose and the back of his hind leg.  Bosco was in misery.  So I got the idea that Harley needed a play friend.  I searched Min Pin rescue sights but none were close to home.  Then I spotted Max and low and behold he was right here in a town 5 miles away.  I mentioned him to Terry who said he would rather not have a brown Min Pin.  Every day I looked at Max's picture...sometimes several times a day.  When Terry had a doc appt a few days later right near the Humane Society, I asked him to go by and see Max.  I couldn't get him off my mind.  The HS called him Spock because of his ears.  He was taken in as a stray and no one came to look for him.  That broke my heart. The HS estimated that he is about 2 years old, updated his shots and neutered him.  He has what I call Donkey Ears that stand tall and the shortest legs I ever saw.  I made an application to adopt him and the next day took Harley to see him.  Harley can be sassy and I wanted to be sure they would get along.  The meet went well and we brought Spock home.  I immediately renamed him Max. After all, Spock was not his real name anyway.  On the way home, Harley sat on my lap and would NOT even look at me..jealousy was rearing it's ugly head.  It took Harley about 5 days to adjust to Max and play with him.  They get along great as long as no toys are involved because Harley thinks every toy in the house is his. Bosco thinks Max is great.  Max is my shadow and I love him dearly.  Sometimes I think about how he came to be at the HS.  But sometimes when I go to pet him he flinches leading me to think he has been hit.  I can't imagine why anyone would find the need to hit him. So now I have 3 dogs again.

It's been a while since I posted.  A really lot of things are going on in my life.  I'll be posting in February talking about what I have been up to.  If I had a New Year resolution, it would be to post more.  I have been reading your posts, but not commenting much.  I get that way sometimes.  Luckily I didn't get hit with depression this holiday.  That may have been the first time in many, many years.

Grateful:  Oh, that is easy today.  I am grateful for Dog Rescue organizations and totally support them as I can.  Max is a wonderful dog and I just can't tell you how happy he makes me.

Tell me something happy today.  We are expecting 6 inches of snow and the temperature on Wednesday is forecasted to be -20 and -40 windchill. I hope my birds and fish survive.
xx, Carol
Posted by Carol- Beads and Birds at 9:30 AM 18 comments